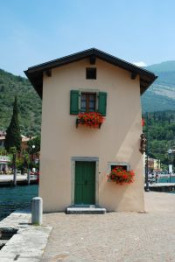 Accessory dwelling units consist of separate housing units within a single-family home, or more commonly within a separate detached structure on the same lot with the main residence.

Examples are cottages, carriage houses in historic neighborhoods, alley houses, laneway houses, mother-in-law quarters, casitas, garden suites, a small rental unit within a single-family home, or above-the-garage apartments in either attached or detached garages. In some locales these might take the form of English basements or ohana houses. Some large new houses are built with what are called secondary suites.

In many cases, a second story, portion of the garage, basement, or great room with a wet bar could form the nucleus of a small apartment. In other places, giant backyards are quite conducive to constructing a small house in the rear of the main house, even with a somewhat private yard area. Of course many traditional houses have carriage houses or other outbuildings that can be converted to a separate housing unit. While once in disfavor with urban planners, this idea is now flourishing.

There are four advantages of accessory dwelling units:

Let's look at these in more detail.

First, accessory dwelling units, sometimes written as ADU's, now are touted as a solution to the affordable housing shortage, particularly in expensive housing markets.  This reason for widening the zoning acceptability of ADU's is growing quickly in popularity where housing is pricey in the U.S. It prompted the state of California to pass legislation in 2017basically allowing ADU's everywhere in single-family zoning districts. Some cities quickly scrambled to impose tedious requirements for them, and in response the state overrode certain types of restrictions and now permits a standalone accessory dwelling unit as of right if it is 800 square feet or less. In addition, what they call a junior accessory dwelling unit, a JADU, is allowed within the main structure, creating a total of two possibilities of ADU's for a single-family homeowner.


Secondly, accessory dwelling units also may resolve the need for extra income for an older homeowner who no longer needs so much space. Real estate taxes in many areas of the country are burdensome to elderly homeowners, and sometimes to those who are a bit too young to qualify for state exemptions for seniors. Allowing an accessory unit brings in income that can be used to maintain the main dwelling and pay taxes and insurance.

But older adults are not the only homeowners who benefit. Young people and indeed anyone struggling financially will find a home more affordable if there is rental income potential, so lenient ADU provisions promote the socially beneficial practice of homeownership.

A third advantage may be that adult children, older parents, or in-laws or other relatives may be able to stay close to family, providing real social benefits. Even if not related, young adults or couples, as well as college students, may appreciate being able to live in a real neighborhood rather than an apartment complex or student housing.

Fourth, city planners like the addition of these smaller units because they can help to increase residential density, making certain shops, restaurants, services, and transit more feasible economically.

Despite these and other advantages, the tradition surrounding zoning is so strong that in many cities and towns, the accessory dwelling units are not permitted at all, allowed only with a conditional use permit, or so tightly regulated that they become impractical for all but the most determined homeowner.

There is a small movement among state and local governments to reverse this trend.  In late 2009, Seattle paved the way by approving an ordinance allowing backyard cottages in single family zoning districts throughout the city. Now Washington state law, for example, requires cities with more than 20,000 residents to allow accessory dwelling units. As stated above, California has basically required all cities to permit ADUs as long as the lot is large enough. California also went further, by exempting ADUs from parking requirements if the accessory dwelling unit is within half a mile of a transit stop.

We hope and suspect that the recent popularity of "tiny houses" will expedite the acceptance of accessory dwelling units, although there is little evidence of that to date.  The interest of some young people in simple living is a hopeful sign.

Accessory Dwelling Units as a Boost to Economic Recovery

Although the movement to support the concept of modifying zoning regulations to allow accessory units in single-family districts has been gaining momentum since at least the late 1980s, the Great Recession of 2008-2009 gave the idea a boost. Another uptick may occur as housing affordability concerns rise in response to rapid inflation.

The potential to create an ADU may enhance housing affordability for a financially struggling household and stave off short sales or even foreclosure. Equally desirable, such a policy may allow twenty-somethings and even those thirty-something couples that have had to move in with mom and dad to restore what feels more natural in the U.S. by re-establishing a separate household.

Permitting accessory units may be helpful in one more respect. Large new construction homes that are no longer affordable to buyers may be more marketable if a prospective buyer can cover part of the mortgage through renting out the extra unit.  This could prevent these starter mansions from lying vacant for years in overbuilt markets.

Relaxing zoning regulations to allow accessory dwelling units under specified conditions and in well-considered geographic boundaries can also enhance the likelihood of restoration in a local historic district. Historic restoration projects are financially and logistically daunting, and a municipality can help make them more feasible if there is a prospect of an income stream to help support acquisition of the property.

In some older historic neighborhoods, alleys, alley garages, and old carriage houses are quite helpful in devising unobtrusive ways to add an accessory dwelling unit without inconveniencing the homeowner in significant ways for months at a time. These arrangements also permit the tenant a greater measure of privacy as they enter and leave their abode.

Other Benefits of Loosening Zoning Regulations

Accommodating population growth and formation of new but small households through alley or carriage houses also has the advantage of supporting programs that discourage sprawl and promote compact development patterns. Where there are alleys, the addition of a small home in the rear of large yards is an especially easy proposition.

Accessory dwelling units benefit a municipality by keeping down the cost of extending utilities while still increasing population. Since household size has been declining steadily in the U.S., population growth within the existing footprint of the town will be very welcome in some situations.

Yet a third advantage is the additional safety that seniors may feel with someone else on the premises. Even a caregiver unit might result from a more lenient set of regulations.

What Are the Barriers to More Guest Houses?

Since granny flats offer such an array of advantages, you might rightfully ask why their construction is not more widespread. The answer probably lies in tradition, inertia, and general resistance to change. Many folks fiercely defend a strict one-family, one-lot policy, which is well entrenched in zoning regulations in the last 90 years.

However, the good news is that when the reasons are compelling enough, municipal zoning codes really can change. This treatment is especially appropriate where both a large older population and a large younger population are willing and able to co-mingle.

Another winning recipe is a somewhat affluent (or once affluent) person in the same space with service workers or college students.

Let's install some safeguards, permit accessory housing through the zoning ordinance, and then launch a campaign to explain the advantages and build awareness among construction professionals of the potential in this market.

If you want to limit the right to add these units or just provide some safeguards against undesirable applications of a good idea, here are some possible provisions that I've seen added successfully to the zoning ordinance: