Try Art in Public Places for Creating a Memorable Space 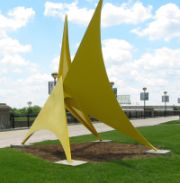 Art in public places, also known as public art, often is a site-specific and site-inspired piece of art. By definition, it appears where the general public or perhaps just a large number of employees can see it.

This page explores the process of finding and choosing artists, managing that process fairly, and striking the delicate balance between a sculpture or other art that is memorable enough to incite conversation, versus artwork that is so provocative or bland to the average citizen that your public art will become an object of ridicule.

Over the last fifty years there has been a growth in recognition of the importance of art in public places, to the point where there are now percent for art programs in several major cities around the world. Governmental projects, and sometimes private developments of a certain size as well, are required to spend 1% (more or less) for paintings, sculpture, murals, or other artworks.

Before we forget to ask, please send in a snapshot of your candidate for best public art, and tell us why you think so.  Others will be interested in your choice.

Perhaps the earliest such art consisted of cathedral adornments; some have argued that architecture itself falls within the definition of public art.

Also early in history monuments appeared in plazas to celebrate local or national heroes, including kings, victorious generals, famous leaders, and so forth. Monuments were grand in scale and materials, and show the hero in a representational fashion emphasizing their might. But somewhere along the way, we're less inclined to put people literally on a pedestal.

As the recent controversies about Confederate monuments in the U.S. have shown, what is considered a cultural celebration in one era can turn into a flash point or an embarrassment later, and this may fuel more selection of abstract art in the future.

Then in the 1960s and 1970s we had a boom in painting murals on the side of buildings, which is still a good idea for large, undistinguished, and plain sides of a commercial building that's highly visible. The nature of the art varies with the times, but the urge toward adornment goes on.

So art in public places began to appear to celebrate the whimsical, and to honor ideas, local agricultural products, war veterans other than leaders, and such.

Sometimes it is seen merely as part of the streetscape or other attempt at overall beautification through adding color, dealing with negative space, and perhaps incorporating some motion.

We also want to encourage you to think about the role of public art in an overall arts and economic development strategy. Certainly it would be odd to promote an arts district that didn't include some visual art accessible to the public.

If you are just beginning to think about public art, or find yourselves disagreeing about how to approach incorporating public art in a space you have in mind, check out the wonderful array of worldwide public art projects that Forecast Public Art has offered online for inspiration.  Then when you are ready, come back to this page to see some handy guideline and also to understand more about how you might conduct the selection process.

The Biggest Trap: Too Much or Too Little in Your Approach to Art in Public Places

Flat-out, I have to tell you that I love art and artists, but a lot of art in public places is rubbish. If the art was bad in the studio, it's bad when it's installed in the public realm too.

Common reasons for failure include under-funding, over-funding (meaning chasing a famous name but not spending enough to obtain his or her finest quality), the committee approach to choosing the artist and over-specifying the project, the difficulty of reconciling a public procurement process with choosing a good artist, and trying to do too much or too little.

In the "too much" scenario, a committee gets together and thinks wouldn't it be great to have a sculpture on every street corner downtown.

Then the financial or logistical strain of carrying out that grand scheme causes them to make bad decisions, and instead of a pleasing sense of place, the sculptures are too disconnected from one another in theme and style to make a positive impact. The quality is inconsistent; some pieces complement the setting, and others don't.

The pieces may even be placed too close together because so many potential works looked appealing that the committee over-purchased. In fact, in some situations bad selections may even have the effect of making a place feel uncomfortable.

If "too little" is done, a group chooses a site and then doesn't really come up with an uplifting vision or sufficient resources to carry out the project successfully. It's usually better to do nothing than to put up something embarrassing. You want your site to be famous, not infamous.

That's a fine line, admittedly. What is great fun to one person, because it plays with our sense of proportion or propriety or appropriateness, becomes an abomination to another person or group.

So use your very best judgment, and don't make rash decisions.

If the art in public places is too predictable, it isn't art, is it? It's just decoration. And certainly you want to decorate your community, but that isn't art.

And if something is art, it's either extremely charming or unexpected. But be careful that the unexpected does not equal stupid-looking in the case of your particular project.

If your committee has fallen in love with something you think is incongruous, there's a remedy. Just as in interior design, one favorite object may be wrong-headed in a room, but four or five subtle repetitions of the same theme in one room may suddenly look OK. So if the proposed work looks simply too out of place, consider for just five minutes whether the incongruous repeated would actually turn out to be delightful.

In that same vein, you may find that what your community can afford is smaller than you would like. Take a cue from a sculpture series in a pocket park outside the Ernest N. Morial Convention Center in New Orleans. These River Stones by Terry Weldon (below) work because several of them of different colors are grouped in the Diamond Street pocket park.  Together they add up to a scale that can stand up to the riverfront convention center, and we speculate this was achieved at a fraction of the cost of one massive sculpture. 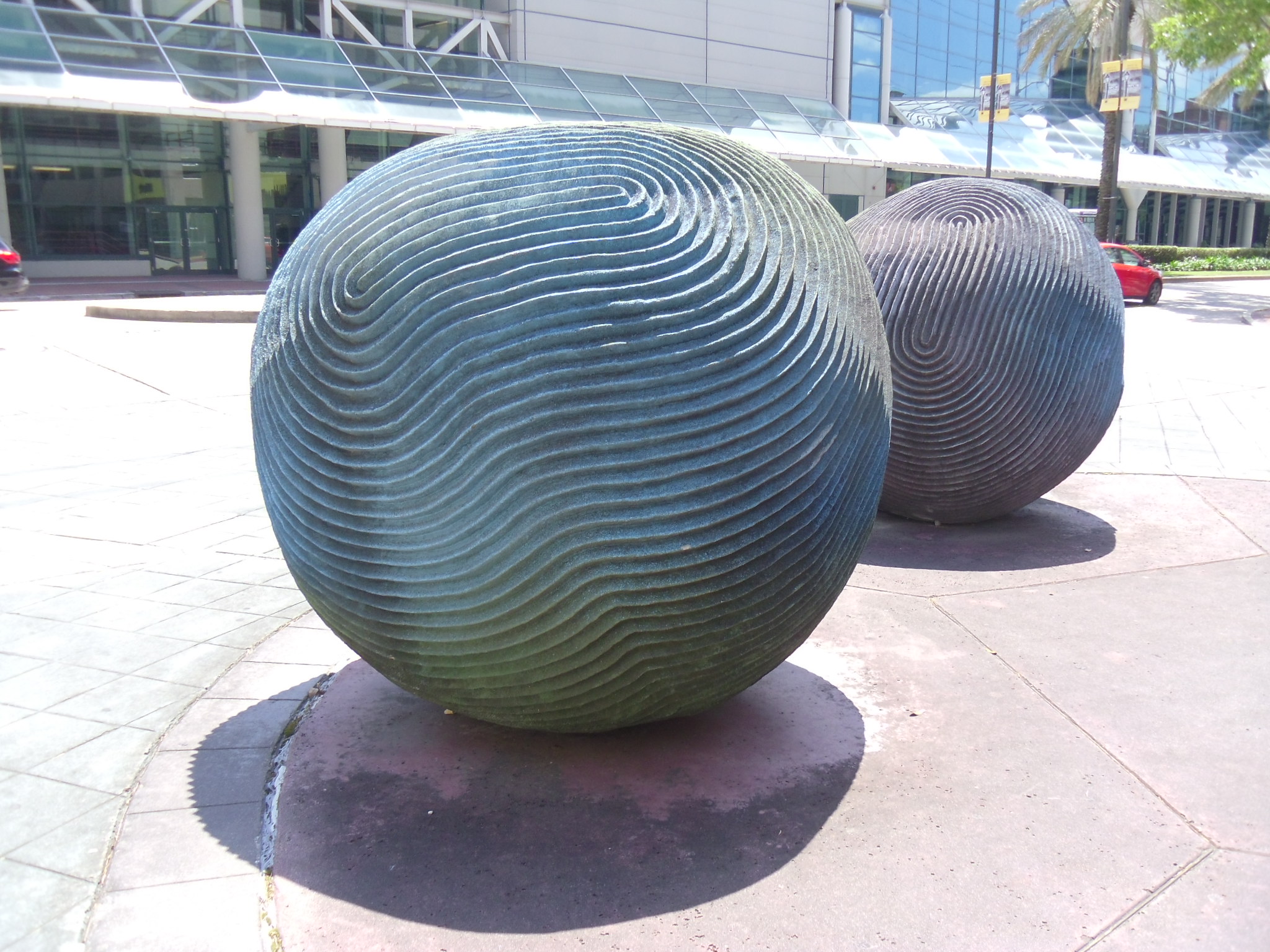 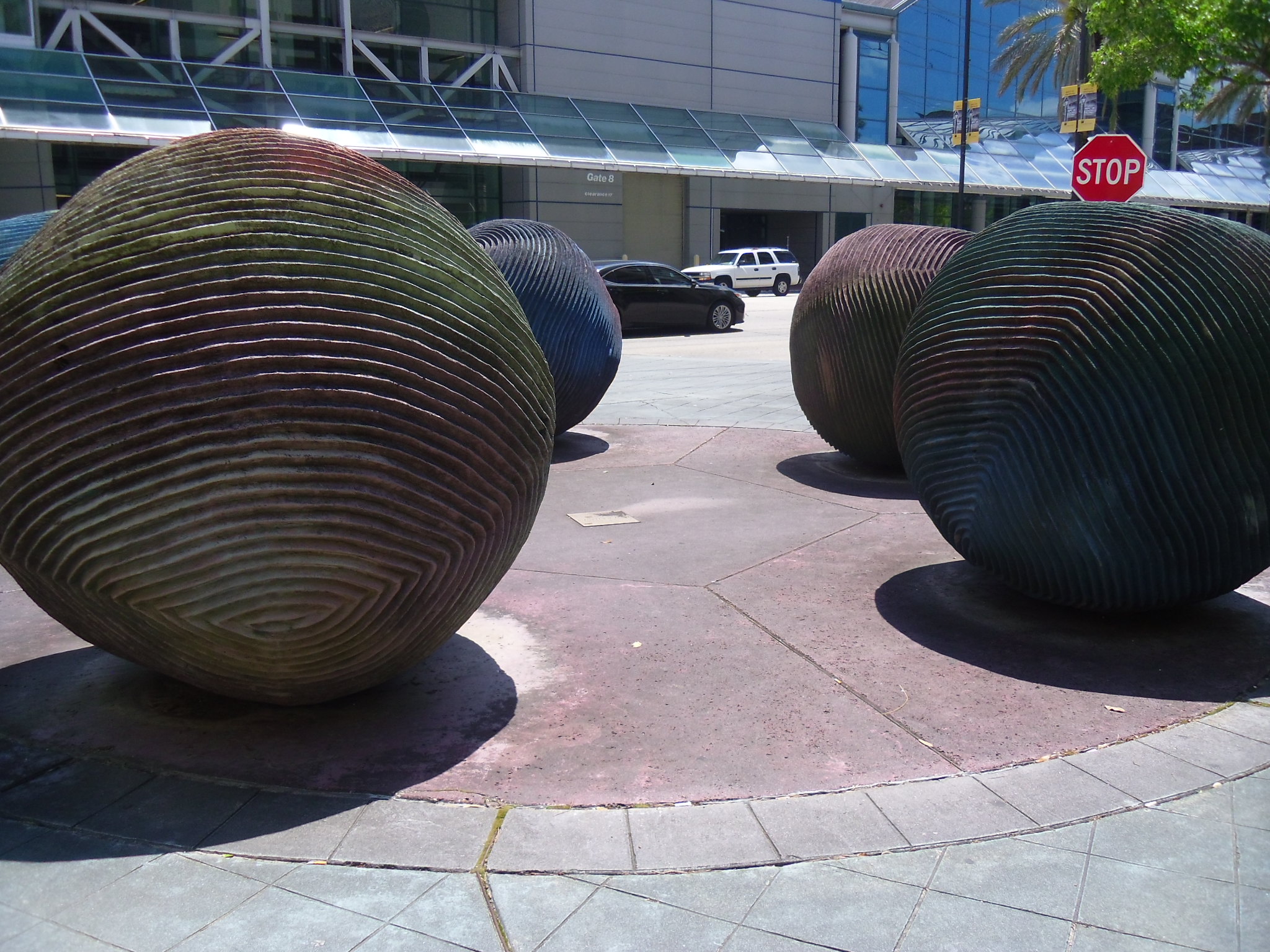 How to Manage the Artist Selection Process

Chances are, if you're on a community development website, your real purpose in reading about art in public places is to figure out how to have some. You or someone in the community either feel the need for some public art or you have an odd space that you'd like to raise from obscurity into a real place.

Just going to a local painter and asking them to make you a sculpture isn't going to cut it. Here are a few tips based on our experiences in commissioning work:

• Art in public places is usually selected or commissioned by a committee, as you've gathered already. Sometimes a patron simply donates a work, but that happens less and less.

The public art selection committee is appropriate because art is so taste-specific that you're going to need a variety of reactions to judge appropriateness.

Choose the committee carefully. Have a couple of art experts on it, at least one of whom has relevant experience in installing art in public places. If you have to import committee members from outside your community, do it.

Also have some respected citizens who have some degree of appreciation for art but who are not embedded in its politics. (Are you shocked? Don't be; everything has politics.)

Certainly include someone who represents the neighborhood and any nearby business district. You may want to consider adding youth or ethnic minorities to the committee, to gain multiple perspectives.

Beyond that, add anyone whose money you'd like to use. And those whose opinion can make or break the project when it comes time to issue a city permit.

• Determine the purpose of the piece. Is it to provoke, to honor, to surprise, to add color, to add motion, to be partly functional (something to sit on, for example)? Are you trying to punch up a dull streetscape, fill a space, divert attention from that monstrosity of a building behind it, beautify a place?

Is this art to impress, to educate, to shake up assumptions? Or is it strictly to complement the architecture or the landscape? Does it celebrate a particular achievement or emotion?

• Decide what style sensibilities will and won't be tolerated. Does this piece need to be representational, or can it and should it be abstract? Or an abstraction of an actual object?

While I've participated in committees that have worked both ways, my opinion is that it's more successful when you as a committee decide this up-front rather than leaving it to the artist.

• Conduct a competition among artists for ideas unless your first meeting leads to a clear conclusion about a particular artist you'd like to use. Hopefully the experienced person on your committee will be able to construct some rules for the competition. If not, hire an arts consultant or try an Internet search and borrow others' ideas.

• Choose an artist who has experience in the scale and medium of the artwork you propose to install. Artists love to experiment, and they do go through periods of emphasizing this or that.

And while I want to see great originality, I don't want to see the artist's first feeble attempts at what is a new medium for her or him. And don't expect someone who makes exquisite and funny sculptures 6 to 18 inches tall to fill that strange triangle by the post office successfully.

• It's essential that you explore your funding picture carefully before making a choice. Consider your entire program, if you decide you'll be adding public art in stages. If you can't raise the money you need for a first-class artist you mostly agree on, consider an alternative.

Children's art may be charming, and it's the solution to many public art dilemmas. Tile is an inexpensive medium, and if you select a color palette and only have those colors available to children, it's hard to go too far wrong.

If you need to support a very modest project, such as children's art, check out our page on how to fundraise.

• Carefully weigh using local versus non-local artists. Non-local artists will almost certainly add to the expense, but whether by a major or minor percentage will vary on the artwork proposed and its method of assembly or installation.

The increasingly site-specific nature of art in public places makes this a major factor. You might want to use local artists for community economic development reasons, but on the other hand, you may be accepting a lesser talent if you constrain the selection process.

Good luck! Invite us to your dedication!