Links Between Autonomous Vehicles and Transit May Help or Hinder 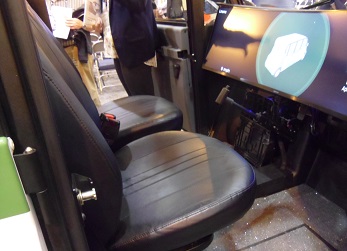 It's important for cities and especially transit agencies to begin serious conversation and thought about different scenarios that may occur as driverless cars and trucks become more prevalent. All that we can be sure of right now is that the relationship between autonomous vehicles and transit will be a close one. We don't know yet whether the new technology will be a positive or a negative for transit, just that it will be genuinely disruptive.

But because we believe in the need for residents and communities to be engaged fully in the social, economic, and infrastructure impacts of driverless cars, we want to encourage informed speculation. Otherwise the big corporations currently involved in building autonomous vehicles, which includes all the major vehicle manufacturers, plus ride-hailing companies such as Uber and technology innovation companies such as Google, are fairly likely to do as they please without factoring in the public interest.

The problem that plagues transit ridership is the so-called "first mile" and "last mile." In other words, transit is popular to the extent that it is reasonable to walk or otherwise travel to the transit line and then to complete the trip to the final destination, with only a short walk or other trip at the end.


In theory, an autonomous vehicle that is hailed (summoned by an app, phone call, or text message) can solve that problem by making walking trips on each end of a journey, or private car parking at each end of a journey, unnecessary. On the face of it, such a system could solve transit's big drawback in the minds of many potential customers.

But then, if you can hail a ride from Uber, Lyft, or other companies to enter the market, why would you bother with transit at all? Wouldn't it just feel more convenient to make the entire trip in your Uber?  We predict most consumers will react that way.

We feel this way because we want existing transit, especially fixed transit such as light rail, commuter rail, trams, and streetcars, to survive. We think there are vast social benefits to transit ridership, to the extent that transit customers reflect a diverse population. It's important to democracy and to social capital to mix with people of other philosophies, occupations, ages, and ethnicities.

By now most of the fixed transit, and most of the buses (which aren't classified as fixed transit because routes can be changed) for that matter, can accommodate bicycles fairly easily. We think that bicycles and electric scooters for both "first mile" and "last mile" transportation and pleasure should remain part of the transportation picture. This provides us yet another reason we would like to see transit survive.

We have made a huge capital investment in these fixed transit systems, and their operations as a public good have been subsidized to the tune of many millions of federal and state tax dollars every year.

Let's salvage this past investment in our collective good by asking and demanding that our transit agencies take the lead on being early adopters of autonomous vehicle technology, in order to keep existing fixed transit as the backbone of the emerging system.

Imagine then that for a daily commute to work, you can use your local transit agency's ride-hailing app to set up an autonomous vehicle that will pick you up at your home at precisely the right time to deliver you to the fixed transit line. Because of vehicle-to-vehicle and vehicle-to-infrastructure communication capabilities on the autonomous vehicle, this timing can be quite accurate. (If you are fuzzy on driverless vehicles in general, or don't understand our last sentence, then you could head over to the driverless cars and planning page for a primer.)  Then you wait a minute or two for your fixed transit bus or train to arrive, where you can converse, observe, and just absorb the atmosphere of being with a cross-section of people traveling in the same general direction as you.

At the other end of your journey, your next driverless vehicle ride will be waiting for you if the fixed transit line stop is too far from your destination. You don't have to worry about the transit schedule because the app does that work for you.  This also means that if your bus or train is late, your self-driving car will wait patiently for you, or more likely, it won't arrive to pick you up until your transit vehicle arrives because it is receiving signals from the transit agency about the delay.

Consider also that this combination of driverless cars for the first and last mile, together with existing fixed transit, may remove some of the stigma and inconvenience of fixed transit for residents of larger lot and more suburban residential developments.

We hope our little scenario convinces you that transit agencies need to be the ones managing the autonomous vehicle revolution, at least as it occurs in cities with an existing transit program. We also trust the transit agency to devise a program that offers the greatest degree of autonomy balanced with safety for children, the elderly, and the disabled.

Child safety especially will have to be guarded carefully in a world of shared vehicles accessed by the general public. If conceived of carefully, autonomous vehicles can replace larger school buses, with good bonuses in terms of safety and reduced air pollution from presumably electric vehicles. Other special safeguards may need to be set up; a solo woman may not want to be placed in a driverless car ride share with one man, or vice versa, for instance.

It's worth contemplating for a moment what will happen in another plausible scenario for autonomous vehicles and transit. It's entirely possible, and we fear it's probable, that transit public agencies will drag their feet on this topic or just lose out in the legislative process or the so-called court of public opinion, and that corporations take over the autonomous vehicle ride sharing services completely. This development definitely could drive transit out of business, as people choose to complete their trip in one vehicle. Of course, transit may not survive anyway in major cities, since ride hailing has achieved such popularity in a short time, well in advance of widespread adoption of driverless vehicles.

The problem with private enterprise taking over all transit is that transit's social mission, increasing social equity by providing affordable transportation for all, may be disregarded if transit is administered solely by a profit-driven private sector.

Importantly, transit vehicles such as buses and light rail are effective in moving around large groups of people at once, whereas ride hailing services will still put a lot of vehicles on the road, even if some of those rides are shared by groups of maybe six people or less. And there is some legitimate fear that the autonomous electric vehicles will simply stay in motion most of the time, except for charging, which means that there will be traffic congestion of a different sort than what we experience now. But if the transit agency runs things, it can quickly and effectively deliver people to the bus or rail car for the bulk of their trip.

We think that the death of public transit would be a defeat for the public commons and the public good. Resident activists and civic-minded folks, let's not allow that to happen.

In December, 2021, another possible new twist appeared to be about to become a reality. The New Jersey Department of Transportation began entertaining proposals for a completely autonomous vehicle-based transit service in Trenton, New Jersey. If driverless cars that operate on a ride-hailing basis actually replace conventional transit, and a public agency subsidizes and operates the ride-hailing service, we would call that a big win for transit--and one that would negate much of what we said on this page. We'll keep an eye out to see what happens next.