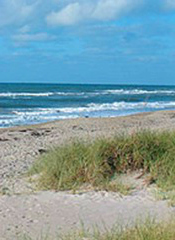 Beach nourishment programs pump sand that has been dredged from one location back to a beach that has been eroded through wave action or damaged by a storm.  While often frighteningly expensive, tourism-oriented communities find them indispensable in preserving waterfront appeal.  There are other less obvious advantages and disadvantages too, which we will introduce on this page.

Synonyms for these programs abound, and might include beach restoration, stabilization, filling, or replenishment.

Before delving further into the pluses and minuses, we should look for a moment at where beach nourishment lies on the spectrum of possible policy responses to the disappearing beach. You are going to readily identify what we as planners think about this issue.


Finding A Middle Ground In Protecting Your Beach

On the one hand, "hard armoring" approaches such as building seawalls, revetments consisting of large boulders, or other barriers have been practiced for many decades.  These engineered solutions typically prevent erosion above the mean high water mark, or average height of the sea at high tide.

These began to fall out of favor because they generally are not very attractive, although I am familiar with one gorgeous one near where I used to work in Florida. Of course they do nothing to prevent erosion of the "intertidal area" between the low tide and high tide marks.  They also concentrate the energy of waves, rather than dispersing energy gently over a wide area.

In response, beach nourishment then began to seem attractive as a softer approach to dealing with erosion. The erosion would be allowed to occur, but then the adverse impacts of that erosion on economics, aesthetics, and other human and ecosystem activities would be dealt with by moving replacement sand into place.

Recently professionals and a few smart planning commissions are discussing a third approach, called managed retreat (also known as managed realignment or planned retreat).  Proponents of this approach advocate removal of any existing seawalls or other revetments, and then relocating buildings or allowing them to fall into the sea.   They speak of shoreline planning, in which thresholds are established for allowing buildings to be destroyed.  Those who favor this coastal erosion mitigation strategy believe that human retreat from a receding shoreline avoids future expensive projects, such as beach nourishment.

These folks also believe that erosion is only a problem where human buildings, roads, and infrastructure have been built too close to the sea in the first place. I share in that belief.

Obviously managed retreat is a tough sell politically.  (It needs a better name too.)   This limitation on property rights is usually not well received by the public, but we think that ultimately it will be much less chaotic than having a real estate market collapse because people can't afford the insurance, or deciding that moving is the only option after a sudden catastrophic erosion from a hurricane.

Keeping in mind those broad policy considerations, we still choose to explore the topic of renourishment, since it is of current interest to many of our readers.

Counterintuitive Ways Beach Nourishment Is Good for the Environment

Now I can admit that when I first heard about beach renourishment, it seemed like a tremendous waste of resources.  I was thinking of all the energy used in transporting sand from here to there, when Mother Nature was prepared to move it back again.  I focused on the disruption to fish and wildlife, not to mention how ugly some other beach, lake bottom, or the ocean floor was going to look after all the digging.

Certainly all of those factors contribute to the cost column if we are preparing a cost-benefit analysis (even the everyday kind that you and I do every day in our households).   However, the benefits may be meaningful too.

First, we should consider the benefit of replenishing sand where creatures from crabs to clams to much smaller organisms depend on their tiny sandy ecosystem for habitat.  Sand also is needed for nesting areas for some creatures, notably sea turtles. The elimination of any organism in a particular area, due to the scattering of sand, has a ripple effect on the rest of the ecosystem of course.  The ecological damage to plants and animals in the contributing area can be offset with careful planning, whereas a healthy sand-based ecosystem in the receiving area likely cannot be restored without some beach nourishment.

Second, beach nourishment tends to provide some level of  protection from severe storms for the shoreline and human investment near the shore.  A healthy beach and dune system slows wave action, and therefore the rate of erosion of the newly augmented beach.  This may prevent  temporary but damaging flooding.

Third, restoration programs may prevent or reduce the incidence of energy-intensive clean-up and reconstruction after storms.  With many scientists believing that global warming will lead to a period of more and more severe storms, this should be a factor for consideration.  The energy used in excavating the sand to be moved, transporting it to the beach nourishment location, and restoring both the beach and the contributing body of water are indeed energy costs, but the potential energy benefit should be recognized as well.

Where white sandy beaches are the main draw for a tourism business, it is easy for the public dialogue to concentrate only on the economic development benefit of maintaining that beautiful beachfront.  Often those arguments drown out every other type of discussion, which is why we led with a few reflections on environmental benefits.

Tourism and economic development go hand in hand, as we have explained in more detail on a page about that very topic.  Tourism jobs often are available to those with minimal qualifications, including the young, immigrants, and residents with a poor educational background.  Even seniors often find part-time employment in tourism.  Most tourism jobs cannot be taken off-shore or off-site, which is part of the reason that economic development officials rightfully value them.

Many beach or dune nourishment programs also help make navigation easier by removing sandy sediment from the bottoms of inlets, lagoons, or nearby inland lakes.  The vitality of ports along oceans or large bodies of water, such as the Great Lakes in the U.S. and Canada, not only provides jobs but also brings imports that create win-win situations for both the importing and exporting economies.

In addition, renourishment may prevent costly and disruptive relocation of critical infrastructure along or very close to the beach, including water and sewer lines.

Note that social benefits also accrue to communities that are willing  to fund beach restoration.  Those who visit oceanfront and the frontage along large lakes are not just tourists!  Many locals rely on these places for recreation, stress reduction, and reconnecting with their families.  If the beach is allowed to be whittled away to literally nothing, then recreational benefits of swimming, sun-bathing, beach-combing, and just doing nothing disappear.

Some of you still will not be convinced that a restoration project makes sense in your particular community.  You are right to be skeptical and to ask for some serious consideration of the costs.  After all, the largest beneficiaries of such projects usually are profit-making organizations, such as hotels, restaurants, recreation, or navigation businesses.  Yes, families and individuals who frequent the beach will appreciate the improved aesthetic experience, but often they have alternative beaches not too far away.

So the general public may perceive a low benefit at a high financial cost, because the public sector, not the private tourism-oriented businesses, usually pays for these projects.

While you can deduce what we consider to be the disadvantages of beach nourishment from what we have written already, they can be summarized as:

Taking all of this into account, then, it seems that a planning commission member, concerned citizen, or elected official needs to think carefully about which approach makes the most sense in a particular geographic area.

We think that the answer will be different in different places, and must consider past investments, particular ecosystem traits in the area where extra sand will be added, availability and proximity of suitable sending locations, degree of dependence of the local economy on tourism, and the type and prevalence of buildings, roads, and other infrastructure, such as water or sewer lines,  along the beach to be protected.

We would encourage those of you considering a beach renourishment project to think about whether other environmental or social benefits could be realized if you piggyback another related beach enhancement onto the intended stabilization. For instance, you could plan a beach clean-up, a dune restoration program, educational programs or planning forums about threats from sea level rise, or habitat education and restoration initiative. Maybe you could teach your community about plastic waste, and even discuss whether you need to add your oceanfront to the online map of beaches fouled by plastic waste.

Partner with schools, libraries, and local conservation and environmental organizations to plan these auxiliary programs.

Read Some Other Pages Of Interest to Beach Communities