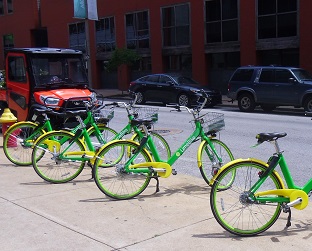 Bicycle sharing sounds like the most environmentally sustainable and frugal transportation solution imaginable. Just think of not having to own a car or a bike, but being able to find a cycle in large cities, pedal one-way to where you need to be, and then pick up another bike or find a different mode of transportation to the next destination.

This idea has really mushroomed since we originally talked about this topic. Cities worldwide quickly are making deals with private companies or running the program themselves. Now it is common for large cities to have more than one company competing for business. The very latest trend seems to be shared electric scooters, piggybacking on the same concept.

Since the big cities seem to be figuring it out, we will aim this article also at small and medium sized cities that never would have considered such a program a decade ago.


Advantages are no gasoline use, some healthy exercise in the case of bicycles but not electric scooters, and low cost per user because a resource, in this case a bicycle, is being shared. Of course tourists also benefit greatly, since they no longer have to use a car to bring a bike to their destination.

Despite the growing popularity of these programs for the last decade, especially in Europe but also in America and Asia too, in the early days most required a considerable government subsidy. Theft was a big issue, and despite the common practice of painting the participating units a common bright color, those who want to disassemble the rental bikes to sell parts often succeeded.

However, technology has evolved a long way toward solving this problem. Companies and governments now are placing GPS units on the bikes that allow them to be tracked, and culprits now can be caught and charged.

Dockless Bicycle Sharing: The Good and the Bad

Recently, better GPS tracking is giving operators the confidence to allow the bikes to be "dockless." This means that rather than having to borrow and return the bicycle from specific locations, riders can now pick them up anywhere they find them, unlock them with a credit or membership card, and leave them at their destination. In our opinion, the dockless business model has caused this business to grow exponentially. The docking devices were expensive in and of themselves, so eliminating the docking stations both increases demand and reduces capital needed for entry into a market.

The "elephant in the room" with dockless services is the haphazard drop off system. In our photo at the beginning of the article, a business district has neatly lined up the bikes for rent. However, in the real world, we also see the bicycles left at every angle across the sidewalk in our community. Just last week we saw an entire sidewalk blocked by three shareable dockless bicycles. This is an obvious inconvenience and possible hazard to pedestrians.

But just think what happens when the inexperienced user parks the bicycle close to the curb and it is knocked over into the parking lane or even the driving lane. Buses and taxis already are complaining about where the bicycles are left in dockless cities. A few bicycles no doubt will disappear into a river or over a cliff when someone parks the dockless bike too close to the edge. 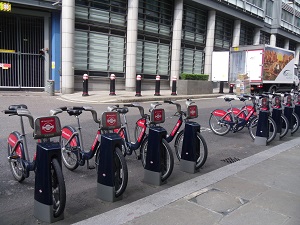 From the standpoint of governments that must either operate or license programs, the question of which policy goals you want to address really deserve careful consideration. Possibilities include:

Quick Review of the Evolution of Bicycle Sharing Programs

The first bike share program that people seem to remember is the Amsterdam white bikes in the late 1960s. I think this was more of a project or social experiment than a serious attempt to alter the transportation system. It didn’t last long; when the cycles are all stolen, that tends to halt everything.

There have been scattered other attempts, but almost everything operating now has started within the last few years. The largest known system is in Beijing, China, where there are about 2.5 million bicycles in the system. By contrast, Paris has 20,000 in the Velib program in its second attempt at getting this right, but Paris is ahead of New York and London in this regard.

The bicycle sharing idea is growing so fast that we won't be giving any more statistics or listing any more cities. In fact, the four of us who work on this site know of five programs that aren't listed in Wikipedia. (The pace of change means that we aren't going to spend our time updating it either. Call us lazy if you want.)

Many colleges and large businesses now administer their own programs. On college or business campuses, sometimes the bicycles are not supposed to go beyond a defined perimeter.

Also the concept of bicycle libraries has emerged, with public library systems actually taking a look at extending their rentals to bicycles. Sometimes six months is mentioned as the amount of time appropriate for checking out a bike. This solution often is considered the right one for lower-income populations where cycle maintenance costs are a problem.

Recently some private companies are offering a low-income membership that allows up to a particular number of rides for a set low fee.

The systems tend to work on one of two principles, either a smart card activation or cell phone activation. Most systems now use an app to allow potential users to find the bike and perhaps reserve it. Many places now require a membership fee. Sometimes a credit card is required to obtain the membership.

Why This Approach Isn't as Easy as It Looks

As we imply already by talking about green entrepreneurship, it's possible that a small private company or a community-controlled cooperative could run bicycle sharing in your community. However, the technology and operational hazards probably need to become even more reliable for this to be a truly self-sustaining activity. In the meantime, a smaller city may choose to subsidize this service, which will serve several positive social and community development goals.

If you investigate and find that bicycle sharing isn't practical in your community, just concentrate on making yourselves a bikeable community until better technology and inventive business models make it more feasible.

From a community development standpoint, you’re going to have many more conversations on a bicycle than in a vehicle. The slower pace makes noticing and interacting with the built environment, in both its positive and negative aspects, much easier. So let's figure out bicycle sharing, especially in the denser parts of our communities.

Larger, more trendy cities will need to think broadly about the innovative transportation ventures, even beyond bicycle sharing, that are likely to be moving into their territory any time now. For example, see a good summary of how cities had to respond fast to dockless electric scooter sharing. Also related for some of you may be our new page on how autonomous vehicles will change city planning and community development.