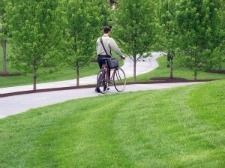 A truly bikeable community provides a transportation option, a physical exercise opportunity, and a recreational amenity that could really enhance many aspects of your life.

Considering that so many car trips are for a very short distance, often less than a mile, the bicycle option helps reduce both traffic congestion and the greenhouse gas emissions that contribute to climate change.

A substantial segment of the population now considers safe bicycling options to be an important amenity. And do we need to tell you that making your community more desirable makes your property more valuable?

In many towns and cities, though, bicycle safety would be a major issue for all but the most advanced cyclists, who can, will, and should ride in the vehicular lane unless there is a dedicated bike lane.

Bicycle advocates swear that this is the safest place for them to be, since motorists readily notice them there. In most places, they have every legal right to be on the road.

Still, those who are less expert would appreciate separated bicycle lanes or bike boulevards or tracks, special markings, special cyclist traffic signals, education of the motoring public, and off-street trails and paths. Our experience as planners tells us that when it is possible to create bike lanes without narrowing the sidewalk or the traffic lanes too much, that is an excellent option. We have come to think that painting them a bright color is even better.


Incidentally, the bicycle boulevard idea, if you haven't heard of it, was pioneered in Palo Alto, California in the early 1980s. Usually, residential streets are signed and fitted with improvements that prioritize bicyclists (or pedestrians), but make life more difficult for motorists. The goal is to accommodate residents and their visitors in their cars, but make it so slow and tedious that other drivers will choose an alternate route. Techniques may include actually diverting cars onto another street, installing traffic circles at either end of the bike boulevard, placing landscape medians and islands in the middle of the street, and putting in speed bumps and all manner of traffic calming devices. If the bicycle traffic becomes prevalent enough, motorists will avoid that street even without prohibition. An ideal location for a bike boulevard would be a residential street with two arterial streets parallel to it and nearby.

In medium and large cities or large university or business campuses, bicycle sharing programs, including rentals from fixed locations or the newer dockless rental enterprises, may be feasible.  These programs make affordable transportation even more inexpensive, and allow tourists and visitors to use active transportation and decrease car rentals.

A bikeable (also spelled bikable also) community provides a very enjoyable way to exercise. In fact, more facilities for biking has been cited by the Centers for Disease Control as a community obesity prevention measure!

Bicycles also are a way to beat traffic gridlock in areas such as downtowns.

Where incomes are low, the bicycle is a low cost transportation method from both an acquisition and an operational standpoint. Bicycle sharing programs that offer low-cost low-income memberships are a welcome development that promises an even better cost picture for the truly disadvantaged.

Cycling should be promoted especially as part of wellness programs and in low income communities. It's hard to beat for inexpensive transportation.

But adults rediscover the fun also, and many relatively short bicycle trips serve the dual purposes of recreation and the utility of running one short errand without putting up with traffic and parking.

If your organization serves very low income folks, borrow an idea from Sibley Bike Depot in St. Paul, Minnesota, and start a community bike library. Community partner organizations lend bikes for six months at a time to community members who cannot afford their own bike. Our observation is that bike sharing companies usually don't serve what they consider lower-income neighborhoods outside of downtowns, so you have to take matters into your own hands.

Cycling requires many of the same considerations as building a walkable community. In fact, together bicycling and walking are known as active transportation.

For example, for both, retrofitting of facilities and connectivity are critical points. The notion of completing the streets by adding bicycle lanes and accommodations, as well as making sure that these bicycle facilities don't have critical gaps, is important in becoming a real bikeable community.

We want to highlight the fact that you do not need to have bicycle lanes on every single street though.  In fact, as a general rule you shouldn't encourage them on roads and streets that have heavy truck and bus traffic. Consider that you have a street network, and if you create reasonable routes for travel between destinations, you can hold down your expenses and administrative burden for maintenance of bike lanes, bike boulevards, and such.  Obviously this is easier if you have a street grid rather than a suburban style street hierarchy system.

Important Needs for a Bikeable Community

Additional needs within a bikeable community are clear markings for bicycle lanes, educating cyclists to pedal in the same direction as the automobile traffic, and educating motorists about how and where to watch for and work with cyclists. A combination of adjustment in infrastructure, education, and thoughtful signage make for a bikeable community.

Other bicycle safety considerations include, for example:

It is also important to work with destinations (churches, city halls, libraries, community centers, schools, business districts, and so on), and importantly to work with employers, to assure that there is a safe place to leave bicycles. Without this, there will be little long-term gain in bicycling as transportation.

One tool that is gaining traction in the transportation world is the road safety audit. A road safety audit, which may be conducted in-house by your local public works people or may involve the use of a consultant, is a formal process in which the likely safety of each kind of road user--automobiles, bicyclists, pedestrians, wheelchairs--is evaluated.

We can't resist speculating on how autonomous vehicles may or may not improve bicycle safety or at least perceived safety. In the best case, these driverless cars will be better able to stop quickly, detect and dodge cyclists, and adjust calmly to the pace of bicycles in the driving lane. Since probably the first generation of autonomous vehicles to really command the road will be electric and smaller and lighter than current vehicles, cycling near them should become more pleasant. And lastly, driverless cars and trucks presumably won't devolve into road rage when they encounter a bicycle! See our general article on driverless cars and planning if this topic interests you.

Bicycling will increase in a community when the connections are more plentiful. Wherever possible, think of providing off-street paths. These can be multi-use paths accommodating not only cyclists but also pedestrians, strollers, wheelchairs, rollerblades, and so forth. You can see an abundance of examples on the American Trails website.

To begin a bicycle trails program for your community, look for long linear corridors that are underused. Often these will follow a stream or a utility corridor. There may be unused road right-of-way, old streetcar lines, old railroads, or old canal roads. The abandoned railroads may be claimed by organizations that will convert them to trails, providing the organization will relinquish the use of the right-of-way if the railroad needs it again.

Many of the these Rails-to-Trails projects have been built across the country and frequently serve as the backbone of a community's trail system.

Increasing your reputation as a bikeable community appeals to younger people, the retired folks, and an increasing number of adults in between who simply want to get some exercise and see life at a slower pace than cars allow.

Another important battle to fight in the community is to make sure that the transit system is bicycle friendly in both its equipment to handle bikes on buses and trains, and in the actual attitudes of transit personnel toward allowing cyclists enough time and leeway to board safely.

Often a bicycle trail is an important feature of a greenway. If you are interested in this topic, see our list of greenway planning resources found on this website.

You can encourage bike commuting to work within your community by assuring a network of cycling facilities near employment centers. But equally important, as mentioned above, you need facilities at the workplace to accommodate the bike. This might include bike lockers, safe bike racks, or a tolerant attitude and physical accessibility of the workplace to allow the bike to stay inside.

A second very important accommodation for the bike-to-work crowd in many climates is the ability to take a shower after arrival at the workplace. Somehow pedaling for 45 minutes on a hot summer morning makes that cyclist less desirable in the morning meeting unless there's a shower available!

Like most community-wide change, bikeable community innovations will require some awareness raising and some campaigning. But cycling events are photogenic and fun, and the fun is contagious. From recreational use, it's a short leap to transportation use on a nice weather day.

If you need help, national and international organizations are springing up all over the place. For instance, the Association of Pedestrian and Bicycle Professionals is a good resource for making your neighborhood into a bikeable community.