You may not have considered how much building setbacks from the street influence your perception of the attractiveness of a commercial or residential block. This may not sound like a very exciting topic, and if you get this right, it isn't. However, failure on the part of a municipality or neighborhood to indicate an acceptable range of setback choices for your buildings can cause an unpleasant sensation of something being amiss. 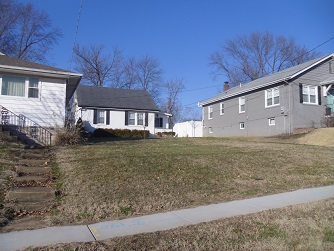 Three homes, with setback of middle one much larger than the other building setbacks

Many of your most perceptive neighbors already have figured this out, even if they couldn't exactly voice why they have this concern. For instance, when a new house was built on a vacant lot about a block from me, one of the other neighbors complained to me that when she came into the living room of the new build she was parallel to the porch next door, and that didn't seem right to her.

Acceptable building setbacks, usually minimum setbacks from a property line or the street and sidewalk right-of-way, are specified for each zoning district in most zoning ordinances.

In addition, setback requirements also might be found in site plan review or subdivision plat approval requirements, deed restrictions applied to a particular property or across an entire development, coastal management zone setbacks, historic district regulations, or local design guidelines implemented across some other particular geography of interest.

In short, if you are looking for the setback from a property line that is required for your particular property, there are plenty of places you might have to look.

If the different requirements are in conflict, assume that the largest, most restrictive setback will be the one that you and other residents and businesses will need to observe.

Why Mandatory Building Setbacks Are Helpful

While we slipped in the word minimum to modify setbacks earlier, it may be even more important to specify maximum setbacks in some situations. We will say more about that in the commercial setback discussion below.

In short, buildings setbacks that fall within a narrow range are very helpful in establishing  and signaling neighborhood character. Such a pattern especially helps to create a pleasing small town character.

In addition, relatively consistent setbacks are very helpful in designing streetscapes. Variations of a foot or two can make an accent paver or stamped concrete pattern a nightmare to install.

For single-family residential districts, usually our tolerance for different setbacks is at least five feet of difference between neighboring houses, but once we start to experience one house set back 20 feet further from the sidewalk than its next door neighbor, we begin to wonder what is wrong with the house with the larger setback, or to feel vaguely uneasy about the neighborhood. This will be true even if all houses are handsome.

Referring back to the example of a new house built near mine, even the five foot difference in setback was jarring because the houses are close together in that neighborhood.

To attempt to create the best urban design possible in partially or mostly built out blocks, some zoning ordinances require an averaging of the front yard setbacks on a block, or even a series of blocks, to establish the required setback or range of acceptable setbacks for new construction. We welcome such provisions, as they can prevent further variation and help to harmonize the existing homes.

The disadvantage of this approach is that it is more complex to calculate, obviously, and someone thinking of purchasing a vacant lot will have to consult with the city before knowing the required front yard depth.

Note that under some zoning ordinances, it is possible that the house will be subject to more than one front yard setback requirement. Corner homes may have two front yards, and conceivably, an oddly shaped lot could have more than two front yards. Cities need to check their definitions of front yard and their setback provisions carefully to anticipate unintended consequences. We like the idea of only one front yard per lot, with the front yard corresponding to a designation on the plat and an actual physical front door. But your long-standing zoning ordinance definitions may be based on a different viewpoint.

Up until now, we have been speaking only of front yard building setbacks. We think those are the most important, and certainly have the largest impact on urban design of a block or a neighborhood. In all but the grandest of large-lot zoning districts, side yard setback minimums are usually small, so the minor side yard variations of five feet here, seven feet next door, will not make much of a difference in the visual appeal of the block. Our eyes also usually glance right over an extra large side setback too, perhaps equating it with just an empty lot or purposeful play yard.

But in some large lot situations, an extraordinarily small side yard setback may seem jarring. If all homes are required to be on half-acre lots, there is little reason to have a minimum side yard setback as small as five feet unless a developer has in mind a very specific character including large back yards, for example. Another instance of acceptable small side yards on large lots is the cluster housing pattern.

To add another layer of complexity, building setbacks for the main structure on a lot, such as a single-family home or a free-standing business, are usually more stringent than those for out-buildings that your zoning ordinance probably calls accessory uses. Typical accessory uses for a single-family home are garages and storage sheds, for instance. This is completely appropriate, since accessory structures almost by definition are smaller than the principal structure.

Commonly the zoning ordinance does not differentiate between setbacks for new construction and existing structures, and usually the setbacks are covered under the normal nonconforming use paragraphs of the ordinance. For more on this, see our answer to a question about zoning setbacks for replacing a structure.

It is prudent for a zoning ordinance to provide a way to waive building setbacks altogether. For instance, zero lot line homes are popular in some areas and can offer every bit as much luxury and privacy as a home with a 10 foot required side yard. A zero lot line home is built without windows  or doors on the side of the home where the home is built right to the property line, and entrances and windows are on other sides of the house. This pattern then is repeated for the entire block. Zero lot line is an economical pattern of construction that serves to contain sprawl, housing costs, and energy use just a bit. Don't forget to allow them if you are rewriting your zoning ordinance.

We think it is helpful for the zoning ordinance to recite other setback requirements that may pertain to properties within a particular district. (We are thinking of incorporating other requirements "by reference," such as adding a statement saying, "In addition, structures in this zoning district must comply with all setback requirements on the recorded plat, recorded master deed, and historic district. In the event of a conflict, the most restrictive requirements apply.")

If you read this website, you will see that we are not proponents of the static zoning ordinance, with zoning regulations that might be changed only every 20 years. Instead we like a dynamic document that is reviewed for updating at least once a year, if not more often. If you follow this pattern, there is no reason that you could not remind readers of some other places where setback requirements might be imposed.  This offers the added advantage of giving the municipality the ability to enforce a condo association's building setbacks, or those of an historic district, as the municipality is checking for building permits, for example.

Building setbacks play a particular role in commercial districts as well. In older, established downtown areas or shopping districts, the pattern may dictate buildings that directly adjoin the sidewalk, which is part of the publicly owned right-of-way. As a generalization, suburban development in the U.S. at least has often featured much wider setbacks from the sidewalk, if any, and from the street. Parking often features prominently within the front setback in the suburban development type.

We think that the parking-in-front style has created some pretty ugly landscapes. In fact, we have found that in our work, people often refer to this style as "sprawl," even though we reserve that term for development occupying land faster than population growth would indicate.

It might be ideal, but it is not practical to suddenly require building to the sidewalk on a single vacant lot within a long strip of commercial development, all of which has been developed with front parking. Thus the challenge is to figure out an incremental approach that will improve the character of the street in the long run. The best route to this outcome often will require complex study.

A city might tackle this issue by making the future ideal setback a part of its comprehensive plan, or alternatively it could enact an ordinance or redevelopment plan requiring corrected setbacks as part of any approved redevelopment plan. The city may be able to craft these documents in such a way that small infill businesses do not have to bear the brunt of a change in setback strategy. A 50 foot wide commercial lot with a new small building meeting the sidewalk line will not be attractive in the midst of typical suburban commercial buildings with wide front parking lots. This illustrates the need for careful forethought about what might work in your situation.

Also we hope that the photos below help you think through how to forge a compromise between an ideal urban design and the existing buildings and development pattern. The photo below is an example. 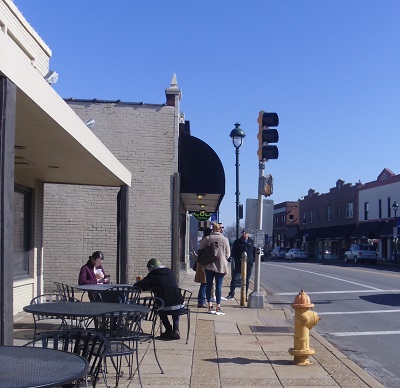 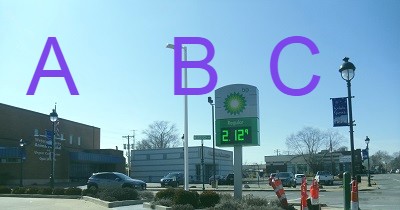 Above: Check out the dramatically different setbacks of buildings A, B, and C, each of which ideally would be aligned with the edge of the sidewalk where the photographer is standing. Notice the compounding assault on urban design of the gas station sign in the foreground. Zoning and various other guidelines could prevent new construction from repeating these mistakes. To correct situations such as this, the zoning ordinance needs to specify maximum setbacks (we recommend zero where possible) instead of or in addition to minimum setbacks. If your commercial block looks like this already, it probably won't be any more jarring if you require the correct setback for any new construction. 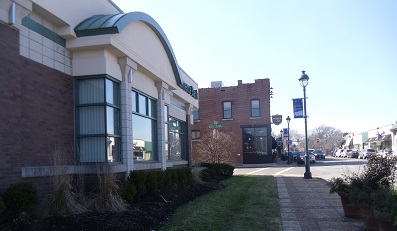 Above: Ideally this bank building could have been constructed with a zero front yard setback, like the older buildings seen in the background. Note that if the projecting portion of the facade reached the sidewalk, the remainder of the front façade would have complemented the business district handsomely. If this occurs in your town, require that any redevelopment of this lot match the traditional shopping district. 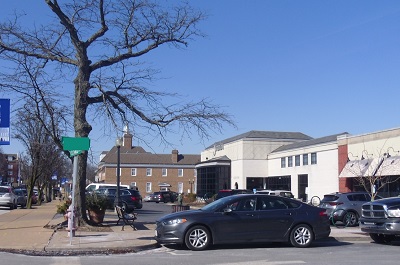 Above: Notice the suburban-style setback with parking in front of the off-white building in the foreground. Behind the photographer and past the otherwise lovely off-white building, building setbacks are more typical of an historic shopping district. Convenient parking does not always have to equal parking in front of the building. A zoning ordinance requirement for building to the sidewalk in the event of redevelopment would be wise. 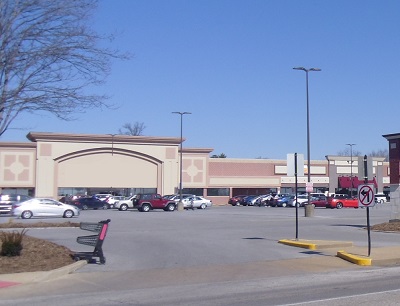 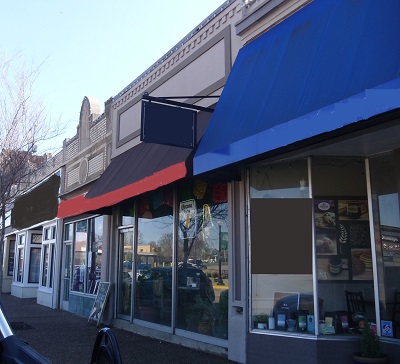 We hope you are impressed with how vital sound building setback regulations can be in establishing and maintaining both residential and commercial neighborhood character.