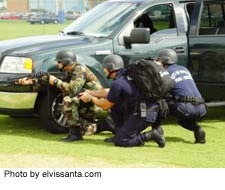 Community mental health often is defined as the movement to provide mental health services out in the community, rather in a large institution in a far-off location. The problem is that when large mental hospitals dismissed patients in the 1960s, there wasn't enough attention to exactly how the community would deal with mental illness.

Today we know that public support of a proactive mental health outreach known as assertive community treatment is important if we are to protect our neighborhoods from the substance abuse and brokenness that leads to crime and aggravations in our communities.

This page explores why so many communities still suffer devastating consequences of lack of treatment for serious, chronic, and/or recurring mental health issues.

Nearly 55 years after Congress passed the 1963 community mental health law, which led to widespread "de-institutionalization" from state "mental hospitals," we have removed the stigma from mental illness to some extent, but we sure don't know enough about prevention or providing aftercare to follow up from acute episodes.

You don't have to be a community leader, law enforcement professional, or elected official for too long to realize that the community mental health treatment system is broken. We saw that a mass killer at Virginia Tech University had been identified as mentally ill and in need of hospitalization, but was neither hospitalized nor closely monitored.

Yet most community leaders put the facts of these situations out of their minds and hope it never happens to them.

We can't blame them, because the complex issues can quickly overwhelm persons unfamiliar with the mental health system. Budget-cutting has eliminated some mental health institutions where people who do require hospitalization can stay.

If you're a neighborhood or community leader who would prefer to stick your head in the sand on this question, of course you may. But while you're looking for a graceful exit, let me challenge you to think of the percentage of your community's budget spent on police work, and then to look at what happens to law enforcement spending when there's a major crime.

And if money doesn't move you, human misery may. Domestic violence--and most other manifestations of mental illness or imbalance also--has a long tail, influencing the children and future generations. People who have witnessed mass killings may need extra community support and mental health services for years.

It's a real community question; community mental health deserves a prominent place in a discussion of community development.

Progress in this area really is possible.  If you doubt this, please look over the youth-oriented Text, Talk, Act initiative, which features both text-facilitated community dialogue approaches to mental health and practical tips for talking with a friend in need.  Because a cell phone and 4-5 people are the only tools needed for a successful conversation, this may be accessible and appealing for the intended young adult audience.

But we say let's create the organization or business that serves the mental health needs of the broad adult population and domestic violence victims as well.

Why the Lack of Attention to Mental Health Is a Problem

1. The U.S. has suffered from inadequate implementation of the community mental health movement for more than 50 years.

Upon passage of the community mental health act under President Kennedy's leadership in 1963, the reality was that states saw relief from a financial obligation that the federal government now would assume.

They released hundreds of thousands of patients with no little to no pre-planning. A few of these same people, now elderly, still suffer from instability in our communities.

But the law's promise of incorporating every part of the nation into a "catchment area," or service area, never came to pass, even though more than 3,000 catchment areas were created. A reinvigorated law passed at the end of the Carter Administration was nullified by President Reagan.

Many of the organizations created in the sixties survive as CBHOs (community behavioral healthcare organizations). They do great work, and the general thrust of the law, that we shouldn't permanently warehouse mentally ill people in large hospitals, certainly holds true.

However, today professionals recognize the need for a period of substantial aftercare after persons have been in treatment for any type of mental health or substance abuse issue.

Chronically mentally ill still need to obtain and be monitored on the psychotropic medications that are far more effective than in the 1960s, but also are accompanied by potential for violent side effects so disabling that people stop taking the medications.

We really don't have a community mental health system that provides enough aftercare.

2. Legislatures have enacted increasingly aggressive laws protecting the rights of the mentally ill or someone accused of being mentally ill from being treated against their will.

In most situations people can't be detained against their will for more than 72 hours in most states. That's just long enough to prescribe some medication, hope the patient takes it, and suggest vaguely some follow-up. This simply isn't adequate in a society where:

As a person who had to deal with mental illness of a family member within the past 20 years, I can tell you definitively that until the person decides to get serious and prolonged help, the resources for community confrontation and detention are meager. The legal and confidentiality protections are all on the side of the person who needs help, and not on the side of family members or community members who are at risk because of the person's erratic behavior.

3. There has been poor implementation of the concept of "mental health parity."

Mental health parity means that mental illness and physical illness receive equal health insurance benefits. This concept has been recognized in law and reinforced in the Affordable Care Act, but the co-payments required by my particular health care plan still are considerably higher if I want to treat depression than if I stub my toe.

4. Mental health treatment may lack sensitivity to or simply knowledge about cultural differences and religious beliefs.

Therefore it is more effective with some populations than others. Think how urgent community mental health needs may be among refugee groups.

5. Despite our best efforts, mental health treatment still is stigmatized in many quarters.

This is particularly true in some congregations and among the military. Many businesses are inept about handling mental health in a sensitive and reasonable manner too.

6. The treatment system is set up for a one-dimensional delivery mode.

People receive mental health treatment if they can afford it, and they either present themselves for treatment because of discomfort, or have a severe episode and agree they need to be treated.

Ideally, from the perspective of the current money-driven health care system, the person can be placed on medication and seen infrequently, rather than placed in a more expensive talk therapy program.

Since finance seems to be the determining factor, we think we can't afford a multi-pronged approach including talk therapy, medication as needed, peer counseling, and family, employer, and community involvement. I think that's a big mistake for communities and a loss of human productivity for society.

Compounding the problem even further, there is very little attention in society as a whole to the need for supportive services during the re-entry period following hospitalization or a severe episode. Those service needs might extend beyond treatment to items such as housing in a more suitable environment or education to allow entry into a successful career or a change of careers.

Assertive Community Treatment (ACT) is the most promising notion I've seen yet for doing what community and neighborhood leaders all know needs to be done. It's promoted by the Substance Abuse and Mental Health Services Administration, SAMHSA, in the Department of Health and Human Services.

This theory is designed to provide the intensive support that many individuals need to successfully move back into the community after a traditional program of mental health therapy.

In this team-based approach, caseloads (the number of persons a staff member is working with) low, so that the ratio of workers to individuals being served is no lower than 1 to 10. The team includes employment specialists as well as various mental health disciplines and approaches.

For example, the state of Washington operates a Program of Assertive Community Treatment that exemplifies the vision. They claim that 75%-85% of outreach occurs within the community. In community outreach, interdisciplinary teams look for individuals who have more than one disorder (perhaps a mental illness and a substance abuse issue) on a severe, recurring basis.

Neighborhoods and communities, isn't this kind of community mental health what we need? Doesn't someone with appropriate training need to go out and look for individuals who are "de-institutionalized" but still not adapting successfully to community life?

For more information on Assertive Community Treatment, find the U.S. government's free downloadable ACT kit booklet about an evidence-based practices approach. Written for the mental health practitioner audience, but understandable to all, the booklet describes how in Alameda County, California, the program was less costly than a more traditional approach to service delivery.

Let's get out there and proactively look for people who need help, so we can have fewer candlelight vigils and impromptu memorials. Those things do build social capital, but can't we figure out better circumstances in which to meet our neighbors?

We also would like to recommend that mental health advocates consider the restorative justice approach for comparatively minor offenders.  Communities could employ such an approach to help offenders with less severe mental health issues understand the true impact of any minor crimes they commit on victims and on the entire community.  Sometimes this is part of court watch programs, which are definitely worth a look for those who are interested in community approached to mental health issues. We've provided a little introduction to court monitoring for neighborhoods here on this website.

A root problem is lack of consensus in society about what the norms of behavior should be. So we have a "live and let live" attitude toward all sorts of absurd behavior. But we need to arrive at common sense definitions and then train ourselves about what's merely eccentric and what's genuinely a community mental health concern.

Community leaders need to devote more attention and some community organizing to this issue. Decreases in crime, domestic violence, homelessness, and traumatic experiences for kids could be your result. When combined with other physical, social, and economic improvements, neighborhood stability and reinvestment surely will follow.