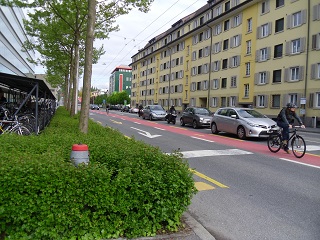 Well-Marked Bicycle and Other Designated Lanes (sidewalk not visible, but present)

Since about the year 2000, the idea of complete streets has been slowly entering the transportation planning vocabulary. When you decide to "complete the streets," you make pedestrians, cyclists, wheelchairs, and transit users just as important as motorists, or even more important.

While unthinkable to most Americans, many European cities ban cars from the center of the city, while others highly discourage auto traffic through steep parking fees and allowing pedestrians and bicycles great freedom of movement.

This is one of the smarter city planning ideas for revitalizing an automobile-centered place that is beginning to look a little tired. People are interested in seeing other people and socializing, and will tolerate slightly slower transit times if the walk or pedal time is enjoyable.

We think it's pretty understandable that traffic engineers have resisted this movement sometimes; after all, they were educated to engineer big wide roads.  Providing comfortable biking and walking was an after-thought, if considered at all.


Complete streets is a much richer concept than just adding sidewalks and bike lanes in a systematic and thoughtful way throughout the street network, though. It includes also designing for a vehicular speed that is desirable and attainable.

We've been designing urban roads to maximize speed, in theory, for 50 years or more. We have wide lanes, very large intersections, and wide setbacks between the street and the private property, thinking that probably we'll have to widen the road yet again to relieve the congestion.  It seemed so logical to traffic engineers and cannot be resisted even now.

Yet this designing for speed is almost entirely wrong for urbanized areas. The handling of intersections and the stop times inherent in those intersections is really what makes the difference in the time a particular trip takes, not the width of the lanes or the number of lanes.

What happens instead is if we build big wide streets, and only a few of them, those roads quickly become congested. If you want to cause traffic congestion, build a great big new road.

You may have heard it said, if you hang around in community development circles, that you can't build your way out of congestion. Our experience certainly verifies the truth of that remark.

At any given time, 25 to 30 percent of our trips are a mile or less. Complete streets would mean that a number of the short trips can be eliminated from the roads.

Among the states operating under some version of a complete streets policy are Oregon, California, Illinois, Florida, South Carolina, Hawaii, and Connecticut. Nearly 1,600 municipalities have adopted by ordinance or executive order; these can be found in cities as diverse as Philadelphia, Santa Barbara, and Columbia, Missouri.

So if you want to accomplish three or four pro-social outcomes at once, observe the complete streets principles:

1. Devise a plan to bring the building line back up to the street, where it belongs, over time.

And to relegate parking to the rear and sides of the buildings, where it belongs. This is a long range proposal and has to be coordinated with the rest of your municipal planning. Specifically the zoning ordinance must support bringing the building line up toward the street by getting rid of required front yard setbacks in commercial zones, and in fact, prohibiting them to the extent feasible.

More and more communities are moving toward form-based code instead of or as an overlay to zoning. This kind of code governs where buildings should sit on the lot, where parking should be placed, building massing, building height, and so forth.

2. Design and build a bikeable community.

Be as aggressive as you need to be in this, based on your population characteristics, climate, terrain, and land use pattern. College students, older kids, young commuters, and senior citizens there for the exercise are your immediate potential users.

Biking is odd, in that the demand for it doesn't appear until (a) the social stigma disappears, and (b) the safe and hassle-free facilities and support services appear. So don't blame your failure to design for bikes on the fact that you don't see many bikes trying to use the roadways now. Why would they? It isn't safe or pleasant on many wide and high-speed roads, and possibly no one has explained that bikes aren't just for kids anymore.

You can have striped bike lanes if you wish. On rural and less-traveled streets, simply stripe the edge of the driving lane but pave five or seven feet more.

If you have room, place these bike lanes out of the way of the vehicular lanes and also 3 feet or more beyond where any doors or parked cars might open. And keep the stormwater inlet grates out of the bike lane, please.

3. Design and build for a walkable community.

If you have traffic moving at a fairly high speed even after the complete streets treatment, you're going to need a median between pedestrians and vehicular lanes that feels safe.

Most sidewalks in residential areas were designed with a grassy parkway strip between the curb and the street, but along some arterials you still see the phenomenon of the two-foot wide elevated strip of asphalt that's supposed to pass as a sidewalk. That doesn't qualify as a safe walkway.

If you want to build a shared bike and pedestrian facility because you don't have room to give each their due, that can work.

Just make it fairly wide so that the commuter bikes don't get too angry with mom and her stroller and other toddler walking along on a nice spring day.

Depending on your climate, be accommodating. If it's hot and steamy, provide shade trees. Trees add so much to the look of the street anyway, you can hardly go wrong there, even if it's only hot once in a while.

Of course, be quite careful about what tree species you select and how you space them. More errors are committed here than almost anywhere else in municipal policy.

Provide benches and attractive landscaping (a streetscape) so that the side of the street looks inviting rather than cold and hard. This even makes driving along the street more pleasant, and is an important element of the complete streets idea.

4. Narrow the driving lanes and the intersections, and decrease turning radii where feasible, to make pedestrians more comfortable about crossing the street.

Implement a road diet. No, you didn't see wrong; we really do mean making your road skinnier. Complete streets is related to traffic calming, but we see complete streets as a broader concept because it makes the beneficiaries of traffic calming--people on foot, on non-motorized wheels, or on transit--so much more explicit. Narrower lanes naturally make drivers a bit more cautious.

Study the turning movements allowed and try to provide a time when it is genuinely safe for pedestrians to cross the street. If you can make a curb extension, a bulb-out shape at each intersection, you provide a bit more safe haven area for pedestrians and make the distance they have to cross shorter.

Pedestrian and cyclist safety is a big consideration in all of this. Severity of the injury and even frequency of death fall dramatically when you decrease vehicular speeds.

Medians, islands (you can build in a slot that is flush with the roadway to accommodate bicycles), and crosswalks all help improve safety. Medians even decrease vehicular crashes.

5. Incorporate on-street parking if you need to.

If you want to encourage shopping at more than one business on each trip, building complete streets into your transportation planning can help to accomplish that.

In shopping districts rather than shopping centers, on-street parking is important to many types of businesses. Generally speaking, we are not too sympathetic with the knee-jerk response of "we have to have parking in front of the store," but in some instances, it makes sense.

In short, anything that brings the shopping and the street closer together is good for business, and anything that softens the environment and lends it color and motion (such as plantings and people) is a good thing.

6. If you are fortunate enough to have a transit system, make it easy to use.

This seems like a real no-brainer, but the lack of reasonable bus shelters and uncomfortable boarding and off-loading situations discourage ridership.

If you can go further and have bus lanes and other transit-friendly arrangements that eliminate conflicts between transit and drivers, you'll end up with more support for your transit system.

7. Begin to plan for an even higher percentage of trips to occur through ride hailing services such as Uber, start to think about where driverless cars will stop to pick up and drop off passengers, and anticipate trends in transportation.

Autonomous delivery vehicles, delivery robots, e-scooters and e-bicycles available for short-term rentals all are changing and will change the way your streets function. Try to be out in front of these style trends and technology advances as you plan complete streets.

Other Terms and Concept Variations Related to Complete Streets

Many cities around the world are responding to movements that want to see streets used to accommodate activities other than, or in addition to, automobile traffic.  For example, there are living streets organizations in citing including Los Angeles and Tucson; these aim to incorporate both walking and bicycling, as well as ecological functions such as stormwater retention or microclimate cooling.

The Dutch have been working with the concept of the woonerf for quite some time.  The woonerf  accommodates not only the cyclists and pedestrians, but also once unthinkable activities such as children playing in the street and restaurant seating with no grade separation from lanes where vehicles and bicycles might travel. In other words, basically no form of street use is prohibited, and drivers of all types of vehicles are expected to be alert to pedestrians walking in any direction and other types of activity.

In England a similar concept is the home zone.  This concept is being studied or implemented in several places in America as well, but it has not gained as much traction there as in Europe. While these concepts share some characteristics of simple traffic calming, most go further in attempting to regulate or required reduced vehicle speeds to the point that vehicles are not moving faster than other forms of traffic.  This can mean 10 mile per hour or even 5 mile per hour speed limits. Often lush landscaping also tends to slow traffic.

These various living streets approaches often are implemented primarily on residential streets and are seen as ways to create vibrancy in residential areas.  We think complete streets are suitable for every type of street in the street hierarchy however.

By the way, if you need more details, you can download a book on Rethinking Streets: An Evidence-Based Guide to 25 Complete Street Transformations.  Also the National Complete Streets Coalition can serve as a major resource.