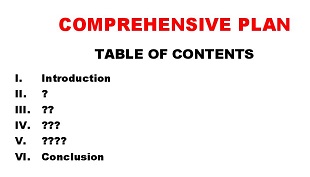 Comprehensive plan contents quickly become a big issue when your community has decided to prepare a plan, either because it wants to or is being required to do so.

In the U.S. a comprehensive plan also may be called a master plan or a general plan, by the way. Planners and land use attorneys may tell you that a court might see all of a community's land use decisions as part of a big comprehensive plan in the sky. We don't disagree with that idea, but on this page we are going to use the term like most citizen planners and interested residents do, meaning a particular plan document or book.

Likewise on this page, we will not be discussing the community planning process, since we already have a page on that subject. Preparing a comprehensive plan is an occasion when that process needs to become particularly thorough in engaging all parts of the community.

One final note of introduction is in order. Usually the chapters or divisions of a comprehensive plan are called elements. We often will use that term.


Typical Organization of a Comprehensive or Land Use Plan

Not so long ago, the terms comprehensive plan and land use plan were synonyms in many communities. Now it is becoming somewhat more common to introduce topics that are only slightly interrelated with land use into plans. We think that is a good thing. However, most plans are still somewhat influenced by the more typical plan from twentieth century America.

At a general level, often the organization of the plan includes an introduction, followed by a section on community engagement and the process of plan preparation in general, an analysis of existing conditions that includes demographic (population characteristics) data and projections into the future, and then a number of chapters called elements. Each element might consist of one or more goals, more specific objectives under each goal, and yet more specific action steps or policies under each objective.

Often comprehensive plans then present a synthesis in the form of a future land use map. Many state laws require a plan map, or imply such a requirement.  Zoning often is required by statute or case law to be consistent with the future land use map.  Note that the map categories may be more general than the zoning classifications. For example, the plan map might show only one type of commercial land use classifications, whereas the zoning ordinance may create three or four commercial district classifications.

Currently the most commonly found comprehensive plan contents include:

Often we see a comprehensive plan that addresses social goals, although often these are stated rather vaguely. We suggest that you think very seriously about doubling down on any particular social ills that may be raging in your community. Every city in the U.S., and many elsewhere, needs to address explicitly how your city proposes to ensure that racial equity and community development work in tandem. Addiction, public health, mental health, changing demographics, and dysfunctional education, governance, or public services all might find their way into comprehensive plans when situations warrant.

Sustainability and environmental topics have been finding their way into comprehensive plan contents over the past 30 years or so.  Terms used might include natural resources, environmental quality, sustainability, water resources or water management, resilience, and locally appropriate topics such as climate adaptation. Preserving or enhancing the tree canopy is a worthwhile and overlooked topic for almost all communities.

A hazards or hazard mitigation element has become a frequently encountered part of the comprehensive plan contents.  Many communities become more specific to their own needs and create titles such as seismic hazards, wildfire prevention, or hurricane planning. A wide variety of communities, not just coastal areas, need to consider the ramifications of climate change and the increase in extreme weather events.

In communities where there is a substantial rural population, an agriculture element now is frequently written.  This element may be cross-cutting with economic development, land use, and cultural heritage.

Cultural resources may be grouped together in a single element, or scattered throughout. This term encompasses historic preservation, archaeology, and other locally appropriate cultural considerations.  Special needs of immigrants, indigenous peoples, or even higher education institutions could be addressed in this way.

In many cases an intergovernmental cooperation element has found its way into the comprehensive plan contents.  Truthfully many municipalities can pursue their plan successfully only with cooperation from the local school district, fire district, water board, county government, or even state government. Meeting these challenges straightforwardly offers the best opportunity to see the positive aspects of the plan come to fruition.

While we would hope that sprawl mitigation and sprawl prevention find their way into the land use element, a community character element might address those issues. Related topics such as commercial district revitalization might be grouped into such a chapter. Or under the banner of community character, you might address historic districts, preserving scenic assets, or balancing the desire for tourism with the needs of local residents.

It is now becoming common to wrap up the comprehensive plan contents with an implementation element.  In the recent past it was fairly typical to write only a page or two of glowing generalities about how the plan would be implemented. Often these pages did not include any reference to the costs implied in the previous chapters, and certainly did not address exactly which funding mechanisms the city or county proposed to pursue to meet those financial obligations. However, it is quite encouraging to see implementation steps, including designation of the departments or entities to take the lead on implementing each aspect of the plan, and the financial costs being addressed in a more meaningful way in today's plans.

Certainly our list of elements would give most land use planners enough to consider.  But just to push the envelope further, we would like to suggest a few other items that either would become separate elements or be sprinkled through your comprehensive plan contents:

In short, planning commissions could and should consider social, economic, and ecological issues and consequences with the same fervor that they pursue land use questions. If a planning consultant is to be hired, your expectations on this subject should be clear during the selection process and early phases of determining the contents of the plan.