Definition of Urban Sprawl Relates to Urban Land Use 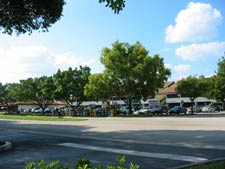 If you ask people for a definition of urban sprawl, you're likely to hear all kinds of negative reactions about bland or even ugly suburban communities before someone actually discusses the core meaning. In this article the visual quality is not the criterion by which we judge whether sprawl exists or not.

Here we think a more useful explanation of sprawl is the condition in which the rate of expansion of the land used for developed purposes, as documented in the U.S. by the Census Bureau and termed "Urbanized Land," exceeds the population growth rate.

By developed purposes, we mean areas that aren't devoted to wilderness or agricultural land uses. Developed land includes residential, commercial, industrial,  school, and institutional land uses, as well as parks, airports, highways, and so forth.

And just like on the parent page about dispersed development, we want to emphasize that a village of 1,000 people could have a small town sprawl problem, so when we say urban sprawl, it is not all about the bright lights of the big city.


Only the 400 or so Urbanized Areas recognized by the Census Bureau will have precise statistics at their disposal in the U.S., but almost any size of community can sprawl.

If you are the type that likes to use correct terminology, we think that what makes suburban sprawl is the fact, for example, that you show a 30% increase in urban land consumption during a certain time period, but your population growth over the same interval is only 15%. In fact, cities that aren't growing at all can be sprawling. Another way to think of sprawl is to think of it as loss of rural land to urban uses.

Sprawl has become a worldwide phenomenon. Great and walkable European cities are sprawling outward, even while their centers hold together well in the traditional pattern. The suburbs in Europe often tend to be the lower-income areas of the metro area, though, in contrast to the U.S.

And in the developing world, poor quality ad hoc shelters are huddled together on the peripheries of major cities. However, these may not constitute urban sprawl at all under our definition if the quantity of land used is small in comparison with the added population.

The United Nations continues to report urbanization as a major global trend, and many experts consider this to be the first time in recorded human history when the majority of the population was in an urban area.

The question is how compact and efficient these urban areas can be. Compactness and contiguity of urban development are important precisely because when executed well, compact development also leaves contiguous non-urbanized land that provides what are called environmental services to the planet.  Intact natural areas can help entrap carbon emissions and other harmful pollutants, inhibiting climate change. Such land uses also provide habitat for animals and plants with known and unknown environmental benefits to human life.

By now you see that keeping urban sprawl at bay is about more than just aesthetics. Nevertheless, in common discussion, sprawl is seen as bad because of how the speaker views suburbs in general, certain types of suburbs that are not aging well, or the exurbs further out. Let's explore that a bit.

Some people seem to include in their definition development types that they consider unsatisfactory, such as large-lot single-family homes with prominent front-facing garages, strip malls, fast food rows, big box stores, and such.

So we might say that the definition of urban sprawl is expanding to mean anything about suburbia or exurbia that the speaker doesn't like!

We just think it is helpful to be precise in the use of terms, but the definition of urban sprawl is not worth a big fight in your local community. Many of the negatives sometimes erroneously associated with a strict interpretation of sprawl also are worthy of your community's concern.

For instance, if you have poorly constructed, fast growing suburbs, the shoddy construction itself can cause failing suburbs, or at least ailing suburbs, in as little as 30 years. That is a big community problem. We don't think it constitutes suburban sprawl, but it is very worthy of community dialogue.

Yes, it's worrisome if your growth is chaotic or of poor quality. But sprawl only becomes a meaningful explanatory concept if most of the development is of low density, meaning few people per acre or square mile. In that event, yes, it will cost the public sector more per person to service that area.

Some people use the word sprawl as shorthand for development that is automobile-centered, meaning you have to drive to the grocery store. Again, that's an important public policy discussion, but one that is not limited to sprawl.  Dependence on driving is more of a social equity issue, air pollution issue, and opportunity for exercise issue.

Any metropolitan area with a stagnant population ought not to be building any housing out on its boundaries (rather than the legal boundaries, we mean the real place where streets and houses on small lots turn into farmland or forest). For more detail on why we make such a strong statement, see our page on effects of urban sprawl.

So what should be done if this metropolitan area with a steady population place wants better housing? Selective infill housing and redevelopment can address those issues without the added expense of building and maintaining more infrastructure. It is true that initially redevelopment may cost a bit more than building on greenfields, due to greater complexity. But in the long run and from the perspective of the community, filling in vacant lots or redeveloping property that is too far gone to save will be much less expensive.

People leaning toward the more conservative side sometimes argue that bigger houses and bigger spaces are intrinsic to the American dream. They certainly would reject our definition of urban sprawl, because each person consuming more land would simply mean greater prosperity in their view.

Just as a sidebar, our problem with that is that if you're fiscally conservative, you should be really upset about sprawl. It's very wasteful of both public and private money due to the expense of providing and maintaining infrastructure, and of extra driving.

By the way, we are not implying that suburbs are always a bad thing. In fact, when they form a gradual decrease in population density without detracting from the vitality of the urban core, they can become centers of excellence in their own right. Right now there is a noteworthy and laudable trend toward suburbs attempting to reinvent themselves by building town centers when none existed before, installing sidewalks and bicycle paths, and generally enhancing walkability, traffic calming, and open space development if they were not originally designed in ways conducive to human interaction and multiple modes of transportation.

We just don't want to see new suburbs being developed at the expense of cities and farmland if more density in the city or already developed suburbs is possible.

Other Subtleties About the Definition of Urban Sprawl

Here our goal is to give a little more dimension to the explanation by showing some nuances to the definition of urban sprawl.

The U.S. Department of Agriculture's Natural Resources Conservation Service (NRCS) is a major data source for agricultural land. Their latest lengthy National Resources Inventory, dated 2015 but released in September, 2018, can be read on-line. We are hoping for an update soon.

This latest report shows an increase of developed land of 1.6 million acres between 2012 and 2015, which reflects a slower pace of developing land than the previous reporting period when more than 3 million acres was developed between 2007 and 2012. But the Department of Agriculture leaves it to others to discover whether this rate constitutes sprawl.

Unfortunately it seems that discussion and research surrounding sprawl have become less trendy (although part of that is occurring because advocates and academics have decided to use what they view as the more positive term, smart growth). The latest definitive research is still Smart Growth America's "Measuring Sprawl 2014," which updates a 2002 report. Download the whole smart growth report and find out how your metro area ranked on sprawl as of 2010, if you're interested.

This group doesn't want to offer a simple definition of urban sprawl, but merely starts describing sprawl as creating a landscape characterized by rigid separation of jobs, services, and housing; poor street connectivity; low residential and employment density; and lack of intense centers of activity and quality downtowns.

I like our focused definition of urban sprawl much better because it calls attention to the impacts to land, but still allows for growth in urbanized land use if there is population growth.

But the Smart Growth America arguments are a great segue to our page about the effects of urban sprawl, whether it is occurring in your city of 15,000 or your city of 2 million.

If you are interested in why your core city or inner suburban neighborhood is struggling, you need to get involved in this issue. In the competition for residents and businesses, you may well be losing out to suburbs on the edge of your metropolitan area. If those areas are growing and your neighborhood is not, then you need to be working to point out sprawl where you see it.

There are sprawl solutions, but it will take some really challenging coalition building to make them happen, since regional governance is so weak in most metropolitan areas. It's worth the fight.