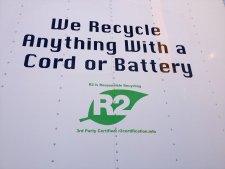 More and more states and nations are starting to require e-waste recycling. Electronics are full of heavy metals that potentially can contaminate water and soil. Landfills aren't able to deal with either the contaminants or the volume. Plus burying our "old" electronics is a landfill doesn't allow any of the valuable metals to be captured for re-use.

Now that computers, televisions, cell phones, game systems, quickly forgotten forms of electronics such as mp3 players, and other electronics are becoming obsolete at ever faster rates, we need to do something about it.

A United Nations report said that as of 2016, about 45 million metric tons of electronic waste is generated annually throughout the world.  That same report found that only about a fifth of it is recycled.

The magnitude of the electronic waste problem is that experts estimate that an average American family has 24 pieces of electronics. The average life of a computer is about 3 years and that of a television is  even shorter.


That volume of e-waste, as it is called, will be disposed of because it no longer works, has been replaced by something better, or becomes a problem because the manufacturer no longer supports it.

Some heavy metals used in electronics pose potential environmental risks. A computer monitor may well contain a couple of pounds of lead. Mercury in small amounts is found in flat panel computer monitors and laptop screens. And cadmium is found in batteries of some older laptops. That's a serious matter.

Equally significant, it's wasteful not to recycle when certain components of an item can be salvaged. For example, your old cell phone may contain copper, gold, tin, brass, zinc, and other surprising things. The plastic case can be recycled. So don't just push it to the back of a drawer, thinking you'll reclaim it later. Experience suggests that you won't.

Should Your Community Begin an E-Waste Recycling Program?

For communities, this is an important topic. After all, electronics represent about 2 percent of all solid waste, most of which is headed to a sanitary landfill. Estimates are that only 20 to 25 percent of discarded U.S. electronics are recycled to some degree. And of that amount, much of it is sent outside the U.S., where recyclers may or may not operate on the basis of environmentally sound standards.

Regardless of the motivations, residents may prod the more green communities to begin electronics recycling simply because it sounds good.

We mentioned at the beginning of the article that many states are now requiring electronics recycling.  However, most of these are so-called producer responsibility laws. So before you start a local e-waste recycling program, investigate the sheer number and ambition of programs sponsored by manufacturers and major retailers. That's when you can call it to the attention of your citizens that many computer companies will take back their old computers.

Many of the e-waste recycling initiatives of individual corporations only handle that company's old item, but some will take products from any manufacturer.

Many major retail chains offer free drop-off at their stores. At least where we live, Best Buy stores are a great no-hassle option; simply tote your dead or obsolete computer to the customer service desk and drop it off.   At numerous U.S. post offices, you can mail back items such as iPods free; check it out.  Related items, such as printer cartridges, also can be recycled and re-used; many times a mailer for returning the depleted cartridges is included with your purchase of a new toner. The U.S. Environmental Protection Agency maintains a list of corporations participating in its sustainable materials electronics recycling program. For corporate e-waste recycling projects, see this electronics recycling program site.

Invest a little effort in discovering local programs that pass old computers and televisions on to other users who would be glad to have slightly outdated equipment. Domestic violence programs and some social service agencies often accept cell phone donations. Large corporations have been donating their outdated computers to schools for a number of years, but think more creatively.

Point out to your citizens that it may be possible to sell operable items through an on-line sales or auction platform also.

Suggest to your residents that it's really not all that difficult to scrub your computer hard drive, to delete phone numbers and remove the SIM card from their cell phones, and to make sure that cameras and camcorders no longer have any photos in memory. A little on-line research provides quick and current information on how to do all of this.

If your community takes all of this into account, and you still decide you want to add e-waste recycling to a municipal recycling effort, just make certain that your a commercial vendor acts responsibly and doesn't simply strip out the most valuable components and dispose of the rest carelessly.

Ask the e-waste recycling vendor to explain the certifications they have earned. Something called the BAN Pledge of True Stewardship is the gold standard for this. If you get a blank stare when you ask about certifications, you might be dealing with an employee who is just a step above a smart high school kid working in the garage. You may have to ask to discuss this with a manager on a higher level.

The argument for local electronics recycling is that, just like any form of recycling, the participation rate is higher when it is convenient.

So weigh all these factors before you decide. I would try publicity about the many other avenues available for reuse and recycling first, but if publicity doesn't reduce the volume of electronics in your local waste stream, it's time to see if a mandatory local program would reduce the amount of broken or obsolete electronics that show up in your municipal waste stream.