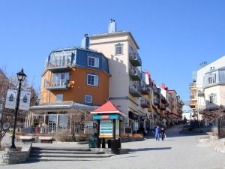 A form-based code replaces or alters all or part of the zoning ordinance of a city or town.

Instead of concentrating on land uses, meaning the use of the building primarily plus any outdoor commercial use, this new type of code is a legal design regulation that describes the desirable physical form, placement, size, and bulk of buildings within the environment. It also addresses the size of blocks and their relationship to one another.

In part, it's the rebellion of architects against bad design results that occur even while conforming to the zoning ordinance. The form-based approach also prides itself on creating a better "public realm," meaning the area between the building owner's lot line and the street.


We should note near the top of this page that while this concept enjoyed a brief period of time as the latest trend in best practices, recently we see some retreat from that position.

More and more cities are simply amending their zoning ordinances to incorporate some of the form-based code ideas related to urban design, finding it too expensive and time-consuming to create an entire new type of land use regulation.

This is certainly what we would recommend at this time. Regardless of whether and how you decide to incorporate form-based code, it will be worthwhile for you to learn more about this approach to land use and building types.

Advantages of a Form-Based Code

A Form-Based Codes Institute aggressively promoted the advantages of these codes, but in early 2018 the institute became a program of Smart Growth America. If you seriously consider a form-based code, keep an eye on this potential great resource to see how they shape their work in this arena.

We summarize these codes quickly in the following points.

1. As a much newer tool, these codes are not required to be in force equally throughout a city or other jurisdiction. They are tied to a physical plan with a map, like zoning, but they may apply only to a district or part of a city. In practice, these areas where a form-based code applies instead of traditional zoning may be thought of as a separate zoning district. Miami is the only major U.S. city to have adopted a form-based code for the entire city.

We should note that some cities are now employing "floating" form-based districts, allowing planned unit developments or PUDs to land where a developer wishes except that a builder must follow a pre-defined form-based code rather than the zoning ordinance regulation.

2. One of the advantages is that the code is usually shorter and less complicated to read than the zoning ordinance.

4. Increasingly, in the U.S. at least, there are no smokestack industries in a town or city, so the old segregation of land uses based on pollution, noise, heavy truck traffic, and other negative impacts of heavy industry is no longer necessary.

5. It's becoming very obvious that to resolve the woes of our transportation system, dependent on petroleum and land-gobbling roads that are expensive to maintain, we need more walkable, bikeable communities (also known as "active transportation"). Due to the emphasis on the form and content of the public realm, form-based codes may promote safe and pleasant places for bicycles and pedestrians.

6. The traditional zoning ordinance doesn't do enough to address building placement, mass, and scale of buildings, especially in relationship to surrounding buildings. There have been weak attempts sometimes, such as making the setback of a residential street the average setback of the existing homes, but this approach isn't prevalent in zoning. (If you haven't heard the term before, you might think of building "mass" as its cubic feet.)

7. Often zoning doesn't even deal with sidewalks, streetscape, street furniture, bicycle lanes, or other amenities between the building façade and the street.

8. Optional topics may include landscaping requirements, environmental performance standards, building material and design requirements, and signage standards. If included, usually these are written in a more design-sensitive manner than the typical treatment in a zoning ordinance, although of course this is a generalization. Potentially both environmental impacts of buildings and the aesthetics of the built environment may be improved by moving to a form-based code.

Disadvantages of the Form-Based Code Approach

The disadvantages that we see are outlined below.

1. As a relatively new tool, only in existence since the early 1980s, there's less societal experience with the codes, so the claim that they are more adaptable to changes in business and architectural practices than traditional zoning is still untested.

What will happen when there is a change in aesthetic, or when there is a game-changer in terms of dominant transportation modes?  Elsewhere on the site we have written some thoughts about driverless cars and possible impacts on city planning.

In fact, the emerging trend toward developing curb management policies and ordinances poses new challenges for form-based codes. "Curb management" is the new buzz word for expanding uses of the curb to include very short-term parking to accommodate ride sharing services, delivery trucks and robots, curbside pickup of restaurant food and other goods, and autonomous vehicle pickup and dropoff, as well as conventional automobile parking. In curb management, the land use really does matter. Restaurants will have far different needs for the use of the curb than most offices, for example. Thinking through these challenges, which have greatly accelerated due to the coronavirus pandemic, may lead to the conclusion that differentiation of land uses was a good idea after all.

2. The newness of this type of law also may make it difficult to find a skilled city planning consultant nearby who can assist with preparing the plan and the code, at least at a reasonable cost.

Examples are many fewer than with zoning, so a consultant is a necessity for most municipalities. A few lucky ones may have a staff member with experience in writing and administering this type of code.

3. One type of rigidity is replaced by another type of rigidity. It's true that increasingly the land use is completely irrelevant, because a manufacturing building and an office building can look exactly the same on the outside and in fact perform the same way in relationship to its environment. A school and a prison may look exactly the same, except for the barbed wire atop the fence on the latter.

These two examples would support the argument that zoning is too rigid and detailed for today.

But form-based codes also are practiced in a rigid manner, favoring "urbanism" over the suburban look and feel, and emphasizing urban design over performance of the parcel of land. While designers don't like to admit this, they too are subject to trends and shifts of opinion over time.

4. If you employ traditionally trained city planners, who think in terms of what parts of the town or city should be used in what ways, they may need to be replaced with persons with more of a physical design background, where the important questions are the bulk of the building, how close the building comes to the street, how the parking relates to the building rather than whether there will be enough of it, and so forth.

5. Some places are now writing hybrids that apply form-based districts within the confines of the zoning ordinance. If form-based codes are so great, it's good for you to ask yourself why more cities aren't applying them to their whole area.

Generally speaking, you will need a consultant if you want to go in this direction. It is certainly possible to "do it yourself" if your city is willing to devote considerable staff time to the project. For those attempting to avoid the expense of a consultant, we recommend the Chicago region's excellent step-by-step form-based code guide.

Form-based codes really grew from the new urbanist movement, so expect to hear about the principles of traditional neighborhood development, new urbanism, and transects (cross sections of town) if you decide to investigate the form-based approach to regulating buildings.

Common applications of form-based codes, where they are used for only a portion of a town or city, include:

See These Other Relevant Pages