The Problem with Gentrification Is Displacement 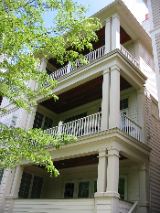 Gentrification is the result when the incomes of people moving into an urban neighborhood are higher--sometimes considerably higher--than those of the current residents.

You would think that's a great outcome, right? Higher income means more spending at local businesses and better maintenance and even upgrading of the housing.

But let's dig deeper about what happens to the lower-income, long-term residents. Rents and home prices increase. Housing redevelopment, renovation, or construction can become profitable enough that the supply of affordable housing dwindles.


The term comes from the idea of the gentry, or people who can afford to own nice property. The impact of gentrification often is displacement of the previous tenants and home owners.

In urban areas, sometimes the same household is displaced repeatedly, as they move to a less expensive neighborhood, only to find that neighborhood also overtaken with "progress" and more expensive housing. Imagine the negative impacts of repeated moves on the progress of children in school,  the commutes to work, friendships and a network of acquaintances, and cash reserves. Unfortunately, some households may have to settle for a crime-ridden and ugly neighborhood.

Often gentrification pushes out an ethnic or racial minority, unfairly forcing those households to bear the financial burden and disorganization involved in moving.  Racial equity and the widespread perception of that equity is critical to the long-term stability of a community.  But in our opinion, the racial equity lens needs to be applied broadly to the community, while the core of gentrification is the displacement of lower-income people in a particular geography within the community.

The Real Issue Is Possible Displacement, Not Gentrification

Those of us interested in community development tend to sympathize with the poor and downtrodden anyway. It feels like a conflict when we see good things happening in the neighborhood, only to notice a few months or years later the negative effects on those who were living there already.

In our opinion, an aggressive program to prevent displacement can be successful in what otherwise might be a gentrification situation with lots of negative impacts on lower-income residents.

The most obvious way to accommodate both lower and higher incomes together is to allow increasing density, either through redevelopment or filling vacant buildings.

In other words, it's wonderful if a neighborhood can become the poster child for mixed income housing and cultural diversity.

It's hard to do because many of the new residents probably grew up in households with some racist undertones, or at least very class snobs. When these "gentry" arrive, some of them are likely to take offense with more down-to-earth grocery stores, liquor stores, fried chicken places, and unfamiliar entertainment and shopping options.

Action Steps If You Sense Gentrification

1. Organize and speak up. If you don't have a functioning neighborhood organization, you will need to start one, as described in our three-part article and in even more detail in our ebook on the subject. You have every right to fight gentrification if it is a real issue. Just try not to throw around the term unjustly; many neighborhoods need more population, fewer vacant buildings, some higher-income residents to create a truly mixed-income neighborhood, and better quality businesses. But be very loud and vocal if the intended or unintended consequence of these trends is making it nearly impossible for current residents to live in the neighborhood.

You will need to be well organized indeed if you are to be able to take advantage of sophisticated tools such as community benefits agreements if and when a major redevelopment is proposed in your neighborhood.

2. Immediately inventory the available affordable multi-family housing units and talk with their owners about how the current general price structure can be preserved, at least in part.

Determine if the landlords need assistance to keep their buildings affordable and in good repair so they will not be so attractive to developers, and if so, see if they will be eligible for any Community Development Block grant or other government funding.

3. If the neighborhood consists mostly of single-family homes, vigorously address any issues of housing that is outdated in terms of today's market demand to reduce the temptation for developers to swoop in and buy up lower-costs houses with an eye toward redevelopment. If they are tiny two-bedroom homes with little closet space, but you're in a metro area where only three-bedroom, two-bath, two-car garage places are in demand, your single-family homes may be seen as tear downs that could make way for upscale condos and apartments.

And maybe you as a neighborhood organization or a local government will be powerless to do anything about it, but give appropriate attention to whether addressing architectural obsolescence would be helpful.

Can you get a grant to hire an architect to illustrate some typical additions that would make your single-family housing less vulnerable? If current residents can't afford that and there's no source of long-term financing, you can at least try to help them at least get their houses into good repair.

If the housing stock has architectural character and unique appeal--and often it is just such appeal that causes the gentrification to begin--building new modestly priced housing may be the best alternative. Granted, lower-income folks might have to move to take advantage of the new affordable housing, but at least they would be able to stay in the same neighborhood.

5. Work with the newcomers, welcoming them to the neighborhood but also chipping away at any class discrimination attitudes they may have brought with them.

Explain that they can have their lattes but that others may want plain old coffee, and that this diversity is part of the neighborhood's charm.

Encourage social mixing to the maximum extent possible, which will tend to alleviate the newcomers' collective tendency to want to organize to move the riff raff out of the way. After all, when we really get to know someone, we tend to find something in them to appreciate.

6. Look to your city government to provide incentive zoning, in which developers are given the opportunity to build more housing units in return for keeping a certain number of units affordable.

7. While we're talking about zoning, check to make sure that the development of accessory dwelling units is legal. A few new garage apartments or finished carriage houses could add places where single low-income residents could live in their familiar neighborhood.

8. Understand and recognize that you may need to accept greater density in the neighborhood in order to preserve the current mix of income levels. If there aren't many housing vacancies or vacant lots, you'll have to deal with the gentrification and displacement if you can't bring yourselves to accept more density.

In many places, density would bring benefits, such as having enough of a market to attract a particular retailer within walking distance, rather than problems. For more on a minor trend toward welcoming higher-density housing, see our YIMBY (Yes In My Back Yard) page.

However, there is such a thing as living too close to your neighbors if people aren't used to crowded conditions. So carefully test attitudes before you pursue this option.

9. If you are genuinely unable to retain lower-income people in your neighborhood, because you are close to downtown, you have a new major employer, people suddenly discovered your great old Victorian houses, or whatever, we encourage you to accept and embrace gentrification, but to work very hard with all your strength to prevent displacement. Stop using gentrification as a verbal assault weapon and spend your time worrying about assessing the potential for displacement and dramatizing the real and negative effects of displacement.

Read More About What happens When the Neighborhood Goes Upscale