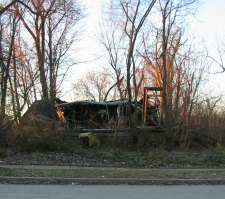 Heir property is found in many parts of the American South, in African-American neighborhoods, and of course other scattered locations in some cities, towns, and rural environments. The term pertains when the owner of real estate dies without a will and then the family does not take the estate through probate court to settle the title to the property. Dying without a will is known as dying intestate by the way.

In some communities this type of real estate may be called called generational property or successional homes. Others call it probate property, which is accurate in the sense that people who die intestate have their estates settled in what is called a probate court in many places. People who aren't familiar with this situation often wonder why it occurs. Mostly this happens in lower-income families, where there is fear of or ignorance of the legal system and simply a lack of funds to pay the legal or court fees involved.


While all may go smoothly with no real negative consequences at first, eventually it is likely to become a neighborhood and community problem.

In other words, one or more family members may live in and maintain the heir property for some time or even for a couple of generations. The issue arises somewhere down the line where the heir who takes good care of the property dies or is incapacitated. Perhaps his or her children don't care about the property, live far from it, can't afford repairs, cannot pay the real estate taxes or argue among themselves about who should do it, or maybe don't even know of its existence. Or for a more complicated example, see our answer to a question about what happens when a minor grandchild inherits an abandoned house.

Maybe someone in the family really might want the house, but notice what happened when another site visitor asked about being locked out of a home that is in probate.

This site isn't legal advice, as we say on every page, but we do our best to give a layperson's explanation of legal concepts as they impact communities. In the case of heir property, the heirs own the land but there is no "clear title." You also might hear the expression that the title is clouded.

Why Lack of Clear Title is a Problem to Neighborhoods

First and foremost, there is no concept in American law of family ownership. An individual or a named group of individuals own real estate.  Therefore if all of the heirs are not listed on the title and the last owner dies, there would be a clouded title. And if you don't have clear title, you can't convey a clear title to someone else if you wanted to sell the property.

So that's a big deal. If you can't sell the property to get money to divide up among the heirs, that means someone has to live in it or you let it sit empty.  If all of the heirs are happy with their current living situation or if the home is in an undesirable neighborhood, no one may want to move in.  Then the family is left with two options. Either they must rent it out or let it sit empty.

Thinking about using the property as a rental, that may be fine if there is a market for rental property in the area and if the property is in good condition and won't require many repairs before it can be rented successfully.  If it needs several thousand dollars of investment though, family fights are likely to break out about who will pay for repairs and updating.  (We're going to leave aside the question of who would be entitled to any rent payments and in what proportions; depending on the state, that can and probably will present legal problems in itself.)

The next problem with heir property is that it will be impossible to borrow money to repair the property or make room additions. Second mortgages wouldn't be obtainable either. Government housing assistance will be unavailable, even if you otherwise would qualify.

Someone acting as a caretaker and occupant of an heir property probably can't obtain insurance, and if they do, the error might be caught when they attempt to collect on a claim.

So all of these are pretty serious problems for the family.  This is why we often see these houses left empty while heirs either dig into their denial of these problems, fight and squabble, or throw up their hands in dismay and make the rational choice to abandon a property that isn't worth much anyway.  But empty houses are not good for neighborhoods!

Why Heir Property Is a Community Issue

If there is a geographic concentration of heir property, you can see that after several generations, home maintenance problems become more and more likely. Eventually the family actually will give up, because the housing decline has become so severe. This is a truly unfortunate loss of a previous generation's investment in real estate.

After Hurricane Katrina caused levee failure in New Orleans, the heir property issue became a strong focus in Louisiana because families couldn't sell, collect insurance, or rebuild. There a private organization, Louisiana Appleseed, teamed up with the state to sponsor a study of how to solve this problem. The legislature passed what is known as Act 81 in 2009 and Act 323 in 2011 to make it less expensive and time-consuming to clear title to lower-value properties. In 2012 an additional measure, Act 618, was passed to allow residents to use an heirship affidavit instead of using the ordinary succession procedure if the deceased person died more than 25 years ago. All of these might become a model for other states that could stand to simplify their procedures.

If you live and work in other states, please ask your legislators to consider addressing this problem by simplifying the probate process as much as possible. If you work with low-income individuals, encourage them to make wills that will be considered valid in their state, even if they have to use a legal clinic, online kit, or some such. Even if that individual makes a will, it's important to keep an updated list of the names, relationships, and contact information of all the heirs.

So communities, scale up to address your heir property issue, because you can't afford to allow the legal complexities to multiply for people who are not wealthy in the first place.

The heir property question also figures into trying to clear up foreclosures. Sometimes a mortgage slipped through with title problems undetected until the real estate landed in the hands of a bank.

Like many issues impacting low-income households, this is a potential downward spiral in which community poverty may truly lead to the severe issues of losing the use of a home that becomes too dilapidated, and then not even being able to sell the land. Abandoned homes are bad news for every community. If the situation drags on for many years, the community may face the issue of locating vacant properties and owners.

As we said at the top of this article, this problem can impact rural communities as well. It is a particular problem in Indian County and in areas with many Black farmers in the USA. Recognizing this, the U.S. Department of Agriculture has created an heirs' property program specifically for rural areas.

How to Help Elderly Individuals Avoid This Situation

This is why people who are part owner of heir property should consult an attorney and attempt to make the situation right, before there are even more heirs in successive generations, who may or may not even know each other. As this situation is allowed to continue for years and years, the family gathering required to resolve the situation is likely to become larger and larger. Or worse, you might have to hire a mediator.

But when we re-read what we just wrote, that seems pretty idealistic. After all, families and neighborhoods are left dealing with probate properties in the first place because of low real estate values in the neighborhood. Probably if they even care, families would make the decision not to spend more money on an attorney, mediator, or real estate agent in the first place because they realize that the amount that a sale would net would not justify such expenses. So we just have to note that the so-called appraisal gap is part of the problem too. (The appraisal gap refers to the fact that the favored current methods of appraisal rely so heavily on comparable sales that entire neighborhoods are appraised at much lower values than they would be if the home itself were magically lifted into another higher-cost neighborhood.)

Next we face another problem. If the folks involved are afraid of attorneys or the legal and governmental system in general, social service agencies need to refer such clients to legal services or perhaps one trusted attorney from the community can be found.

Unfortunately families often don't seek appropriate help on their own, especially when none of the heirs live in the neighborhood or even the same city. Lest we be perceived as blaming the victim, we should say that sometimes, or maybe oftentimes, abandonment of the house is a completely rational economic decision for a family.

Therefore neighborhood associations where heir property is fairly common should work diligently at setting up legal clinics where volunteer lawyers help prepare wills for older residents.  You can sponsor events where attorneys who are willing to help low-income families free (pro bono) come to explain what is involved in avoiding a situation where grandma's house falls down because no one is able to take responsibility. Work with your local bar association to plan this event.

Larger cities have legal services offices where lower-income older adults can get help.  (You can search for your local Legal Services Corporation office, if there is one, at this link.) Even then, the legal services office may need to recommend private attorneys who will work on a volunteer basis.  The neighborhood association has a vested interest in making sure that no homeowner dies intestate, so it's worth some time to try to arrange for a few Saturdays of free legal help.

Then while the low-cost or free attorneys are helping out with preparation of wills, the neighborhood association can and should talk with them about how to set up clinics or workshops for the current heir property owners or representatives.  That situation is more work for an attorney usually, so the neighborhood shouldn't expect that to be quite such an easy sell.  However, it's worth the work when homes are saved from being empty until they are sold at a tax sale.

Next Read Some Pages Related to Generational Properties