How to Fight City Hall,
or a Village or Town Board 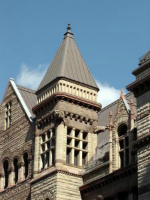 Learning how to fight city hall is a critical tool for many neighborhood associations, community non-profits, activists, and community development corporations. Use these skills as a last resort because maintaining a good relationship with your city, town, or village often works better than engaging in a public dispute.

But sometimes your neighborhood or viewpoint might not be treated fairly, city elected officials or staff might be stubborn or biased against you, or your elected representatives do not consider seriously a problem or a new proposal that you bring forth. Sometimes they just underestimate what is possible.

If you exhaust personal face-to-face meetings, petitions, responsible and respectful use of social media, letters to the editor, speaking at council meetings, and so forth, and you decide you need to stand up and fight about an issue that is important to you, here are the steps.

1. Find yourself an Organization

If there are existing organizations but you haven't been active in them, investigate a bit to make sure you affiliate with the most powerful or respected one.

Be careful of the reputation of organizations you identify with, but that does not mean that you have to agree with every single thing they say or do. If the position of an existing organization is compatible with yours in a broad issue area, consider that sufficient. If they have a far-flung initiative that does not overlap in subject matter with your common interest, don't worry about those particular disagreements.

If there is no existing neighborhood or block organization or coalition that will represent your interests, start one if you have to. Don't try to do this by yourself. If you are the lone repetitive voice, often you are labeled as a crank, which makes you less effective, not more influential.

2. use your most well-respected Supporter as Your Only or First Spokesperson

Keep the discourse civil, rational, and respectful, but state your opinions, and especially facts and evidence, assertively. Explain your case using photographs or video, logs or counts of activity observed, eyewitness accounts, and plenty of examples. Teach all your supporters the facts as best you can, so that whether they speak at the meeting or not, their word of mouth and social media conversations are knowledgeable and well-prepared.

In a municipality that likes to keep meetings short and to the point, you may only be allowed one speaker, the speaking time may be limited, or you may simply be more persuasive if you keep your number of speakers low. Other cities, towns, and villages have different personalities, where the sheer number of speakers impresses decision makers. Find out beforehand which type of presentation is more likely to be successful. Even so, be prepared in case you are allowed only one speaker if the hour grows late and the agenda is long.

If you are in one of those places where long public meetings are a favorite sport, often you should try to determine the order of your speakers in advance, and place the likely most persuasive person either first or last.

3. By All Means, Bring a Large Crowd of Emotional Supporters to the Meeting

While emotional, inflammatory, and accusatory statements or questions usually aren't how to fight city hall, you can bet that the most emotional people will exhibit the most expressive facial and body language too. Their postures will tell the story. Don't use them as your speakers though, if you can help it.

We find that an undercurrent of anger and frustration often is helpful in getting your point across, but make sure to convey forcefully that facts and reason are on your side.

The exception to using the rational folks, well-respected people, and good speakers as your representatives in a public hearing or comment period is when you have a rare eyewitness account that has surprise value. This is especially effective if the person is a sympathetic figure, and the damage to him or her was significant.

Another time to use the most emotional speaker possible is when it is critical to evoke a sympathy response to an issue that will be somewhat of a surprise to the decision makers. This might be true when you are standing up for dogs or small children, for instance.

Try to arrange for your group of supporters to sit together. If you have time to order T-shirts or to ask everyone to wear a white shirt or a bandana, that too is helpful.

If you feel that city officials may not believe the problem is as severe as your neighborhood perceives it to be, show them the problem.  Cell phone quality video, still photos (preferably date and time stamped), or handwritten charts will help you make the point.  If you are complaining about litter, bring some along.  (Watch out not to make this overly repulsive though; a dead rat in a plastic bag won't win you too many friends.) If you are complaining about the need for a stop sign, take the trouble to track down paper copies of accident reports at the intersection in question, and hold them up during the meeting.

Be ready for reporters and decision makers to want to examine your evidence, though, so don't succumb to the temptation to fake it or bring along only marginally relevant or persuasive items.

If your complaint is common nationally, introduce evidence, by which we mean data, from other cities sparingly. However, if your city's decision makers seem skeptical that anything can be done about the problem, bringing in stories of how the issue was tackled in other cities can be helpful in breaking through skepticism and inertia.

5. Learn How to Fight for Funding You Need

A fairly unique circumstance involves a meeting about a project or organization that is in danger of seeing its grant or budget from the city cut.  In this case, be assertive in a way that acknowledges and even empathizes with the difficulties officials are facing. The economic dislocations due to coronavirus realignments is really stressing some municipal budgets, so be aware of the city's common plight while still standing up for what you need. Be able to explain and justify the dollars and cents of your proposal in clear and exact detail, as well as the possible savings if the city decides to run the program right.

Asking for money may be the instance in which you and your organization need to show the most empathy for city officials. Only very rarely will a city move in a positive way if attacked because of a funding cut; this might happen most often in a city that really is affluent and can well afford the expense.

If you need your funding reinstated, take new steps toward learning about how to fundraise for yourselves, and show the decision makers that you are willing to meet them part way.

6. Be Sure You Do Your Homework

You are not ready for this fight until you know exactly how your city council and staff members are likely to react, and what their meeting procedures are.  Instruct your supporters to be mannerly--whatever that might mean in your community. If you haven't done this before, seek out the people who are regulars at city hall meetings; they exist everywhere we have worked. Ask them when they are allowed to speak, whether time limits will likely be imposed, and what types of arguments often prove persuasive.

You might need to play detective outside of the meetings. If you know the mayor's wife or staff members in positions of power, have some informal conversations with them about how your town works. Don't take unfair advantage of them or put them in the awkward position of seeming to ask them to take a position on your topic. Just ask for simple information about processes, attitudes, and priorities. For instance, you might find out that your city is preoccupied with a certain problem right now, and that you could tie your issue in with the one that city hall is already talking about.

A second type of essential homework is understanding and recognizing how cause and effect work in reference to your issue and in your type of neighborhood. For example, if you are complaining about high rents, be well aware of any scarcity of housing, gentrification, or landlord price gouging in your area.  If you don't really know much about the root causes of the problem you are addressing, keep searching and reading on this website until you feel comfortable with the relevant dynamics.

Also be sure to take into account the cultural context. Newcomers to a town (and non-natives too, such as college professors or company CEOs) often are full of energy but fail to recognize how to be effective in the new setting. For instance, rural communities may be folksy and informal, suburbs may be oriented toward kids and their activities, and big cities may be business-like and competitive. In Small Town USA, you have to be even more concerned about preserving friendships and working relationships. But in New York City, for example, the habit is contentious meetings in the non-profit and public sectors, so know the culture of your place and adapt these hints accordingly.

Wherever you are on the planet, however, we hope you don't make bribery, violence, or intimidation a part of your fight. Those practices lead to bad government now and in the future.

For additional tips and a different slant, you might want to look at our page on opposing a rezoning.

Keep in mind that your long-term goal is to win at local government relations, because a city government that likes your group will give you more of a hearing, more resources, and more favorable decisions than one that doesn't. Sometimes you have to consider how much a win will be worth to your neighborhood if you sour the whole city council on your organization.

We have been thinking about a relatively simple neighborhood issue, not these mammoth societal challenges. We're almost at the end of this article, but we haven't mentioned what may be most prominent in some of your minds.

If you are struggling for racial, ethnic, sexual orientation, age, religious, or any other kind of equity, you may be in a medium-term or long-term fight. This is where sheer numbers matter. As we saw with the resurgence and expansion of Black Lives Matter in 2020, sometimes exponential growth of participants, particularly participants who are not part of the out-group, can be key to moving public opinion. By all means, when you are part of a major movement for justice and human progress, use the full power of many bodies to underline the growing support for your cause and to begin to be taken seriously. Even in that case, though, we would suggest that when the action moves indoors and toward a specific and limited agenda item, follow our suggestions for fighting city hall.

Read Related Tips on These Pages