Land subsidence is the term applied for a sudden or gradual sinking of land from its horizontal elevation, with little to no sideways movement.  We believe your planning commission and staff need to become more aware of this potential hazard.

This is a global issue, and one that is increasing in importance in the last 50 years or so.  This increase is thought to be due to more extraction of natural gas and drilling for petroleum, and an aggressive pace of pumping water from the ground faster than it is being replenished. 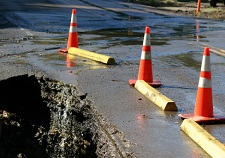 Of course, this isn't much fun at all if your own community is hit.  Sudden lowering of the ground obviously can damage buildings, making them structurally unsound, even if they don't lean like the famous cathedral in Mexico City that has been subsiding gradually over many years.

Of equal importance to the public sector, underground utilities and wells of all types can be damaged. Or as the photo shows, even the infamous sinkhole causes some driver trauma, repair expense, and traffic disruption.


Flooding can occur when the land subsidence area begins to collect water.   In the Houston region, the San Jacinto battleground historic site had such a subsidence-induced flooding problem that levees and pumps had to be introduced to contain damage. Subsidence has contributed to the relative sea-level rise in the southern Chesapeake Bay area. It also can make coastal communities more vulnerable to loss of wetlands and marshes that can protect somewhat against hurricanes.

The U.S. Geological Survey has prepared the definitive short paper on land subsidence, if this is a problem that is up close and personal to your community. Since the U.S. has about every kind of geology, it may not be such a bad example for the rest of you.

To give an idea of the magnitude of the problem, the Geological Survey says that 17,000 square miles in the U.S. are prone to land subsidence and that 80 percent of this condition is attributable to removing more groundwater than Mother Nature replenishes through rainfall or snow melt.

Examples of other causes include drainage of extremely organic soils such as moss peat in Alaska and collapse of soluble rock layers underground. Limestone is an example of a soluble rock that might be present in your community.

Obviously an issue that can lead to greater flooding, infrastructure damage, sea level rise, destruction of wetland ecosystems, and possible damage to humans, buildings, and vehicles deserves the attention of citizens, planning commissions, and elected officials.

This is an interesting community issue because it is interwoven with land use planning and real estate development policy.   On many pages of this website, we are urging you on to greater housing density so that development--and the transportation and utility investments that support it-- will be more cost-effective.

However, another angle deserving very serious consideration in areas prone to land subsidence is the cost of that density in terms of water consumption.  In places that are becoming more dense, water conservation becomes an extremely serious issue.

This is all a little ironic, since some instances of land subsidence are inherent in geological processes over which human beings have little control.

But the greater incidence of problematic and expensive land subsidence hazards in recent decades really highlights the impact and human causes of the dewatering phenomenon. Dewatering is the process when an aquifer, the technical name for an underground water source, is being pumped faster than it is recharging.

Some of you have had traumatic instances of sinking of the earth, such as the tiny community of Benld, Illinois, where a seven-year-old elementary school built over old coal mines subsided suddenly and caused an unanticipated $26 million expense to taxpayers.

If you're a planning commission member in a community where there is karst topography (a specific limestone or dolomite formation) or where old mines have been closed, beware.   If you have heavy clay soils and are experiencing unprecedented rainy or dry seasons, you too are at risk.

But to take on the major causes that humans can influence, watch out for water use above and beyond the carrying capacity of your ecosystem.  Think through the implications of an increasing demand for water in your community. For instance, see our answer to a site visitor's question about the impact of drilling large wells on neighboring properties.

Map and monitor that underground aquifer system as an essential part of your land use intensity planning, zoning regulation, and hazard mitigation planning.

If you are asked as a local government or planning commission to consider drilling for natural gas or oil, be fully aware that you are unleashing some potentially powerful geologic risks.

These are not factors that you can evaluate in depth through asking your planning staff, unless you have had the forethought to add a hydrologist or geologist to your team.  You are likely to need expensive consultants to help you sort through the evidence presented by the oil or natural gas company's no doubt well-funded consultants. Also try to channel the expertise that may be available at a local university.

Just as many communities are in denial about the impacts that climate change would actually have on their beachfront residences and hotels, or their waterfront industries and business districts, a number of the cities and towns that could be identified by the casual observer as being at-risk for buildings and infrastructure to crack open and sink seem to not care.

You can wait until it happen to you, and then watch the blame game and the lawsuits fly.  Or you can be proactive by talking with local university or state government experts to understand your risk factors and then take steps to lower your risk.

Somehow as planners, we are usually on the side of being proactive.