Land Use Planning Principles for Commissions, Boards, and Residents 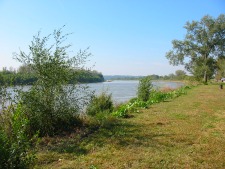 Adhering to sound land use planning principles, which should be applied by groups such as municipal planning commissions and town councils any time future land use is discussed, will result in a community that allows efficient transportation, expands housing choice, protects environmental resources, creates pleasant and attractive surroundings, and yields flexible options for business. Discussing the 16 principles below locally will help you clarify the desired future of your community and indicate how you should evaluate land development and redevelopment proposals.

1. Respect and plan around the physical characteristics of the land, including slope, soil types, rare geological or environmental characteristics, floodplains (whether or not currently protected by levees), wetlands, and coastal zones.

This should be fairly obvious, but because we tend to ignore our local realities so often, we place this at the top of our list of land use planning principles. Sometimes historic characteristics of the land and water have been ignored as well, so you may have to investigate the positive or negative impacts of filling, dredging, and other man-made alterations.

To see how this applies, imagine you are forced into a linear configuration, such as a beach community between the ocean and adjacent jurisdictions, or a valley community between mountain ranges. In those examples, respect for the land and water will mean a different shape of your city than the town in the middle of a flat plain.

2. The capacity and characteristics of the transportation system, including transit and bridges, are the second most important determinant for land use.

Sometimes transportation planning is undertaken at a different level of government, so be sure you know what your county or state highway departments have in mind for you. In a U.S. metro area, you will have a Metropolitan Planning Organization designated for you, and they are responsible for allocating federal transportation dollars, which are very important dollars indeed in major road building.

Heavy traffic generators should be placed on the larger capacity streets. Major shopping and other traffic generating uses should be placed at major intersections so there is access from two high-capacity streets. If you understood only these two land use planning principles, you would be ahead of many small town and small city planning commissions.

Restrain your impulse to line major streets with businesses and busy driveways. This defeats the purpose of a hierarchy of streets based on their capacity; soon your supposed high-capacity roads will be the slow, traffic-clogged arteries.

3. Recognize or designate the existing downtown and any other major shopping or activity centers, and then plan to allow auxiliary services to group near them.

Generally more dense and intense land uses should be closest to the activity centers. In the event that your downtown is too large because your population is shrinking, the land use planning update is an opportunity to right-size it by planning for future multi-family housing or mixed-use development.

4. The density of the housing allowed also should relate to the capacity of the transportation system and physical characteristics of the land. Discovering ways to make increased housing density and commercial intensity acceptable as land use planning principles in your community is a very important project.

This importance stems both from the need to avoid suburban sprawl and the desire to keep your community's carbon footprint as small as possible in this time of possible global warming and certain increasing demand for energy use world-wide.

5. One of the most important land use planning principles is making transitions gradual. This is why you should not place your heaviest industry by your largest lot single-family detached homes. Residential should give way to neighborhood-scale retail, then to more intense retail and light industry. Heavy industry, sanitary landfills, and visually unappealing or stigmatized uses deserve some well-considered transitions from your most desirable real estate and from housing of all types, including modest homes and multi-family buildings.

6. Change your designations of ideal future land uses when there's a reason as you progress through the mapping part of land use planning, or as future land use or zoning changes are requested.

If there's a sea of existing and future residential together when you see the color-coded maps, you may want to think of neighborhood-scale commercial where there's some vacant land at an intersection.

7. Mixed-use development is extremely worthwhile, as described on our page about the topic, but should be allowed a large enough area to make it feasible.

Many smaller communities are naturals at mixed-use, since that was their historic pattern. They will be relieved to find that their corner stores and houses next to offices are now legitimate according to contemporary land use planning principles.

8. Transit-oriented development in general should be mixed-use development, although of course there are exceptions. But do allow for intense future land use around future or current fixed transit stations. By "fixed transit," we mean transit that runs on a track or line, and not transit such as a city bus route that can be changed tomorrow.

9. Keep in mind that some industry still uses heavy rail, so of course provide some access if you intend to attract those types of industries. Recent research shows that about 40 cities in the country have potential for a cargo-oriented development zone, so keep that idea in mind if you find a truck freight and rail facility within relatively close proximity to each other.

10. Consider appropriate scale for your community as one of your land use planning principles.  Sometimes we try to change the character of an entire neighborhood by building one, two, or five houses, and that probably will not be enough.   On the other side of things, we think we can somehow allow the development of 200 new contemporary design homes on the edge of a neighborhood of 300 historic homes without forever changing the character of the historic area.  That probably won't work either.  This is what we mean by scale.

In some cases, that means prohibiting any further development of a particular type. For example, you might already have too much speculative office space near your downtown. Yes, if you don't provide further opportunities to repeat what successful developers have done in the recent past, other developers will complain, but your community is more important than easy profits for developers.

In other cases, this principle will mean aggressively mapping for additions to current land uses that you have in undesirably small quantities.

11. In general, try to create districts that are close to square in shape, as opposed to long oblongs. For instance, rather than strip development along a highway, create a wholesaling district. Of course for retail and entertainment districts, try not to make them linear.

Streams, bikeways, and the oceanfronts and valley floors mentioned earlier will be linear, but shopping areas need plazas, benches, and fountains in the middle, don't you think?

12. Consider historic patterns of discrimination and marginalization as you plan future land uses. Can you help right some of the wrongs of the past, such as dividing off minorities from neighborhoods occupied by the majority racial group by constructing interstate highways? Can you help bring justice to neighborhoods that were run down by lack of mortgage lending ("redlining") in the past, or to neighborhoods where decent neighborhoods were ruined by toxic industrial development?

13. In all cases, document in words why you are making particular mapping decisions. Although a policy-based city plan is highly desirable, if you decide to take a map-centered approach, you still need to record what land use planning principles you were considering as the map was being drawn or changed. This step increases both ability to withstand legal challenges and ability of average citizens to understand the "why" of municipal zoning and development approval actions and therefore to support them.

Is the population composition changing in any way, due to immigration, aging in place, or lack of in-migration of people from other cities? Are major employers leaving or arriving? Is your airport expanding or contracting? What about military bases? Are many or even most of your residents working at home, at least part of the time? Are your residents calling ride-hailing services instead of owning a second car? Are shopping preferences overwhelmingly leaning toward online purchasing and discount stores rather than historic downtowns or malls? These should give you some important clues about future land use.

However, if your policy is to convert agricultural land use to residential and other urbanized land uses, make sure that reasonably expected population increases in your metropolitan area justify this conversion. Otherwise, don't plan conversion to urban uses. If you think the land is more appropriate as conservation land because it is poorly producing agricultural land, that's reasonable too.

16. If you are at the edge of a metropolitan area, or if you are planning for a town or small city that encompasses most of the urbanized land development within your boundaries, consider establishing open space buffers or greenbelts at the periphery of your town as urban sprawl solutions. You'll send the signal that this marks the end of the urban development, and future expansions should fit within that boundary.

17. In most cases give private developers some choices. If you map only one parcel of undeveloped land in your entire community for commercial development, that pretty much denies options if that parcel is not for sale. If you limit choices too strictly, expect an uproar or a lawsuit. Obviously, if you follow most of our principles and document the data that you rely on, you might win, but really do your homework when you want to limit future development of a particular land use sharply.

We are not saying that these are the only principles or even the most applicable ones for your city. Our suggestions are thought starters for you as you begin to develop your comprehensive plan contents or reassess your zoning ordinance.