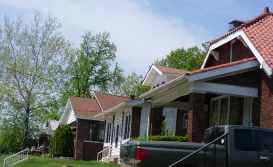 Local design guidelines may be useful in developed areas in a situation such as the one shown to the left, where most houses have a front porch, but one porch has been enclosed. The guideline would encourage or prohibit porch enclosure.

In a situation such as the sad case to the right, however, such standards would not be useful at all when materials, size, and placement of three adjacent homes are so dissimilar.


Local design guidelines provide a method of assuring governments that key characteristics of buildings reflect community standards that have been established at a policy level, and not negotiated on a case by case basis with a particular developer or property owner. Our experience as planners has been that the guidelines are much more likely to seem fair and impartial to the public than negotiated agreements.

Sometimes known as architectural standards, and increasingly becoming discussed as "design policy" or "design standards," these statements are a means of conveying to builders and developers what will be acceptable in terms of aesthetics and construction quality.  Sometimes these statements are actual law, and sometimes they are advisory only, giving both local government and developers some flexibility.

Historic districts routinely have specific standards attached to them.  Condo associations enforce a form of architectural standards.  But such common provisions are useful in any type of zoning district or neighborhood in which reinforcing or establishing a specific character is desirable.

While writing the guidelines can be both tedious and controversial, it is far better than facing allegations of favoritism or discrimination on the basis of the personality of a developer or homeowner.  We authors of the website have more than a few battle scars from serving as the staff for cities or business districts trying to write these standards.

But the benefit of these guidelines is that they help the property or business owner think about how to apply urban design principles to specific districts or situations.

Examples help clarify the meaning.  The policy provisions may apply to all buildings in a particular zoning district, or all buildings containing a certain land use within a zone.  They might include provisions such as:

Although thus far we are writing as if local design guidelines pertain to mostly developed areas, be aware that this type of regulation or policy suggestion also is quite common in developing or planned communities as well.

While we are discussing the definition of local design guidelines, it is worth noting that often local governments publish their own internal standards for parks, public buildings, or other specialized uses under this same very broad term.

No doubt some developers in your city will want to fight any design guidelines that you might be considering.   Actually we have found that written and adopted architectural standards are far more fair to all developers than unwritten opinions expressed by the governing body or one particular elected official, planning commissioner, or staff member.

Some communities are just happy to have any type of development in the short run, whether it represents a quality product or not.  But many more local governments expose themselves to legal challenge and to charges of unfairness with behaviors such as these:

In some states the fact that a developer already has invested money in the purchase of land (or an option on it) and in engineering and architectural fees means that the developer now has a "vested right" to proceed on the basis of conformity to existing written requirements.  When a municipality starts to discuss other restrictions of design that are not written down and transparent to all, that city now is in danger of legal challenge from the developer or even a financial claim.

Architectural Standards as Part of Zoning

Early in the process, usually the question arises as to where these regulations are housed in a city's code of ordinances.   If the city has land use zoning, often the zoning ordinance becomes the container for the design standards.  In this case, care should be taken to make sure that the standards being written genuinely apply to every parcel lying within a particular zoning district.

Sometimes zoning districts have to be divided into one or more sub-districts to make design guidelines sensible for each property in the district.  This can entail large-scale rezoning, which gives us pause as to whether the zoning district regulations really are the proper container for design restrictions.

Possibly the design policy can be carried out by creating a zoning overlay district, which may or may not require just as elaborate a procedure as a rezoning itself.  If the overlay is an easier procedure than rezoning, this may be ideal.

In other cases, the legislative intent might be carried out by describing a type of building or land use to which the design guideline pertains, regardless of the particular zoning district in which that land use occurs.  This typically can be accomplished through general language in the zoning ordinance.

A form-based code overlay often consists largely of design guidelines, and if a form-based code is an existing layer of zoning, this becomes the proper home of a design policy.

If there is neither a zoning ordinance or a form-based code in place, or if the zoning ordinance is considered too broad to meet the intention of the city council, design guidelines could be a standalone ordinance applying to an entire municipality, or to a mapped sub-district. A community improvement district, special business district, or officially recognized neighborhood might take the lead in preparing the guidelines for use within their boundaries and presenting them to the city government for debate and ultimately approval by ordinance.

A few municipalities may have freestanding ordinances covering planned developments, and others regulate condo associations or subdivisions apart from zoning.  These also may be appropriate places for design regulation, but the city attorney should be consulted early and often if these more unconventional placements in ordinances are being considered.

We are not fans of establishing design regulation through restrictive covenants, since they are not publicly enforceable except through courts. E-mails from you, the visitors to this website, support the impression that HOA boards are sometimes arbitrary, personality-based, lacking in knowledge, or even non-functioning or non-existent. But these essentially private statements of design intent also are common in the U.S., and in fact they are the most common form of design regulation in the fast-growing states.

Lastly, sometimes the advisory types of local design guidelines are simply stated in a policy document such as the comprehensive plan, land use plan, or a specific area plan.  Certainly local design guidelines are an important tool in the arsenal of city planning, but our opinion as planners is that inclusion of the detailed regulations in the comprehensive plan contents would not be particularly appropriate. However, the plan may well state that design guidelines need to be written and implemented, and give a general overview of the intent of such guidelines, the geography to be included, and the procedure to be used in arriving at them.

In sum, there are a variety of possible legislative routes to establishing local design guidelines.  Our best advice is to think carefully about what you are trying to accomplish, use your imagination about possible unintended consequences of your proposed regulation, consult your town or city attorney to make sure you are constructing something that is likely to hold up in court, and then move ahead.

Just don't get carried away. One of the authors of this website worked in a jurisdiction where a business district wanted to specify the Pantone color numbers of acceptable colors for building exteriors, signs, and awnings. We think this is really legislative overkill when private property owners are paying for exterior improvements. General color recommendations are appropriate and fairly common, but there is no need to go overboard on color matching in a well-developed neighborhood.

Next You May Want to Read About These Related Topics