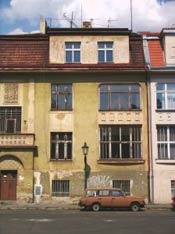 Neighborhood revitalization usually consists of a lengthy series of community improvement projects, rather than a single initiative.

But as a neighborhood you can make it easier or more difficult to make your particular community a great place to live. You may not have the knowledge or the money to act as your own real estate developers, but you can take many small steps to improve the appearance and functioning of the neighborhood.

Often after you take the easy steps, though, you do not quite know where to begin, and which part of your geography should receive the greatest emphasis. On this page we present four general strategies from which you should choose.

Deciding What to Do First

We think it is important to choose a sequence for neighborhood revitalization, an ideal order in which you would address problem buildings and sub-districts of the neighborhood.


Neighborhood revitalization often is opportunistic--that is, it takes advantages of unanticipated circumstances, whether that is extra grant funding, vacant real estate suddenly coming on the market, or a developer with ties to the neighborhood becoming aware of what you are trying to do.

Yet we would insist that there are many advantages of choosing your preferred geographic priorities for the neighborhood renaissance.

As an important aside, we should say that people with a short attention span will be very bored with this revitalization strategy discussion.  Channel them into one of those "fast wins," which is a clean-up, a social event, or beautification project such as painting, board-up, or flower planting.

Then while the social butterflies are out having fun and doing things that will attract positive attention for the neighborhood, get to work on a strategy.

First, take care of emergencies, if you have them. That is an important simple strategy in and of itself.

If a building is falling down, a bridge is closed because of lack of money to repair it, a factory is about to close, you have a drug house, or you have open gunfire or prostitution, those are emergencies.

Put about 80 percent of your energy into solving any immediate neighborhood crisis situation, and 20 percent into long-range stability and growth measures (housing, economic development, community organizing) that strike a chord with you and/or your elected official.

Potential Strategy 1 for Neighborhood Revitalization: Work on Your Best Block

Most of the time, your first project that is not an emergency situation should build on a strength rather than a problem or a weakness.

So here's what I want you to do. Take a Saturday (or more) and have a group of activists and residents help you map your assets, as advocated in the asset-based community development approach.

Then step back and notice where there are two or three assets near one another. If a block has a pretty old church and a four-family building being rehabbed, and that's the most assets you've mapped on any block of the neighborhood, there's your answer. Try to get some real estate development elsewhere on that block.

In short, for Strategy 1, find the block or half-block where assets are strongest, but where something still needs to be done, and start there.

Use the relationships that you have been building with people of power and influence to ask for money and useful contacts. You have to overcome your fear of speaking with property owners.

If you really need neighborhood revitalization, you'll find an owner who is discouraged enough with the current situation to sell. Now what you need is an investor to buy the building.

That's harder to come up with than you might think, so if your neighborhood has any rich and powerful friends, this is the time to be talking with them. Plead with them to network in their social and business circles on your behalf so you can identify someone who's interested.

Start a small project, whether it's a new sidewalk or rehabbing of the second building on that block. It won't seem like a little project to you at the time, because it can take you six months or a year to begin to see some progress. Usually projects take longer than you think.

If Strategy 1 doesn't feel right, Strategy 2 is to begin at the other end of the spectrum, with the worst thing in the neighborhood. Turn it into an asset.

This is what people who make money in real estate do. They find the worst house on the block and make it the best house. That could be your neighborhood revitalization goal.

Maybe you have a vacant building with architectural character, and you should find a developer who would help you convert it to a new use.

Then dig into the topic of redevelopment, and learn about the world of possibilities that await you for the site. A new building where your worst building formerly stood might lend a whole new energy to your neighborhood revitalization initiative.

If it's never going to be a good building, because the owner let the roof leak and people crawl in through the broken windows indiscriminately, convince or help the owner to demolish the building.

With a very limited budget, consider clean ups. We're inviting our visitors to send photos and paragraphs about their clean up activities. Check at the community development ideas introductory page for a list of those pages.

Strategies 3 and 4 are longer-term. Make a judgment about which is likely to work for you.

If you have only one strong part of the neighborhood, use neighborhood revitalization Strategy 3. Begin with your best neighborhood anchor and slowly work outward in both directions from your that institution, building, block, or series of blocks. Address the properties in order, to the extent you can do so in a market economy.

If you already have redevelopment, housing rehab, and good homeowner maintenance in the area, try very hard to twist the arm of your next would-be investor to stay contiguous to (next to) the finished buildings.

When they insist on leapfrogging over to the next block, you can't stop it, but work with real estate agents and developers to convince them that proceeding in order from building to building is very helpful to neighborhood revitalization.

Strategy 4: Strengthen Two End Points and Work Toward the Middle

This strategy is appropriate if you've identified two or more strong areas, with some weaker or more economically deprived parts of the neighborhood in between.

Again exert discipline and persuade real estate folks to help you stay contiguous to the well-maintained parts of the neighborhood that are your two growth magnets, to the extent possible. But reach outward toward the other growth magnet.

In instances where the two positive poles are along the same major street, you'll be able to watch development literally crawl from each end until it finally meets in the middle, and whole block faces are solid.

In neighborhoods where demand is fairly weak, you can see this improvement along one block without any significant progress on the adjacent blocks.

However, once the ends are about to meet in the middle, investors start trying to out-do one another in selecting the next area, so you'll see them jump over to a nearby block to take a risk.

We know that some of you are despairing of finding even one strong area in your neighborhood and are looking instead for solutions to concentrated poverty. In that case you need to try a variation of strategy 4. Look for the closest relatively healthy neighborhoods to the north and south of you, or east and west of you; it really doesn't matter which. Then begin to work on your own neighborhood by prioritizing your blocks that are the closest to these areas of relatively health, even if they are a mile or two away.  We know that could seem very discouraging, but it is likely that your recovery will be an extension of some other neighborhood's assets.

Deepening Your Understanding of Community Dynamics

We've given you four strategies from which to choose, as though these are clean, simple models. The real world will not be as neat and tidy, but if you recognize the sequence you'd like to see redevelopment following, you will be much more focused in your efforts.

If other developers step in and mess up your grand plan, just consider that a gain. You may have to regroup more than once to reconsider the strategy you want to follow.

Because all of this is so complex, if you're going to be a neighborhood activist, build a strong knowledge base. Too often leaders simply try to repeat success stories from somewhere else. That might not work.

Below are photo links to a few of the most common topics on this website that might seem applicable to your neighborhood revitalization challenge. If none of those topics seem right for you, you can use the search box at the top of the page, or check out our Sitemap.