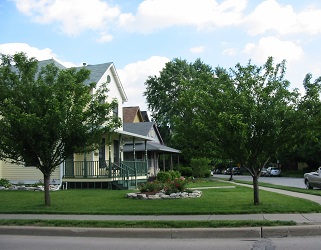 We think the phrase neighborhood watchdog is appropriate for a program of early detection of symptoms of decline, unheralded signs of progress, or simply large or small issues that should be addressed.

We adopted the name from someone who we suppose meant the crime prevention program with a similar name. If that is what you thought you were going to read about, we will get you over to that page in a second.

We're adapting the phrase neighborhood watchdog for a program of action that sends volunteers out on a regular schedule to check on problem properties and see if any property is developing into a nuisance. Preferably this trek would be made on foot, but certainly you can do a so-called windshield survey by car, if your "neighborhood" consists of many square miles.

Usually this program will be sponsored by block units or neighborhood associations. If you have neither, you could use the watchdog idea to start one or both. (We have an ebook on starting the neighborhood organization.)

A structured checklist should be completed probably every 2-3 months, if your neighborhood is in jeopardy, and twice a year for places where everything is generally in good repair.

By the way here is where to learn about neighborhood watch, a more famous program devoted to crime prevention.

You would be the best judge of what should be included in your neighborhood watchdog checklist, but below are a number of suggestions, based on the numerous neighborhood organizations that we are in regular contact with. Choose the ones that apply to you.

If you are in a city neighborhood with long blocks, use one form for each block. With shorter blocks, you can group several on one form. If you feel you will only have a few entries in the entire neighborhood, maybe you just need one form. If you like, people can enter their observations directly on a tablet computer, and perhaps on a shared form or spreadsheet.

The list below assumes the neighborhood watchdog volunteer will note a general description of the condition, plus the street address or detailed location for each situation:

If you are ambitious, you might consider a one-time housing condition survey to kick off this program.  As explained on that page, volunteers can perform this type of survey, which would assess several of the items on our checklist above.

How to Use Reports from Your Neighborhood Watchdog Group

Once you have arrived at your neighborhood inventory checklist, and before the first volunteer heads out his or her door, determine where you will report each item on your checklist.

Noise, congregating ("hanging out"), and likely drug deals or prostitution fall in the latter category, but unsecured buildings also may need to be referred to law enforcement.

Traffic signals, traffic-related signs, and street signs typically are handled by a public works department. Report a rat sighting to the health department, and a vicious dog or wild animals to an animal control office if you have one, or to a public health agency.

You may want to use the information about new construction, facelifts, landscaping jobs, repainting, and other positive developments to recognize achievements in your neighborhood newsletter.

If you have a graffiti removal group in your city, that's a great asset. Report graffiti immediately. If you're on a two-month cycle, that's not nearly quickly enough; graffiti needs to be removed immediately three or four times in a row before the rascals or artists, as the case may be, decide to move elsewhere.

Appearance of what might be new hazardous materials may need to be reported to the closest office of your state environmental agency.

Dumping on a commercial property that doesn't appear to be attributable to the business should be reported to the business or property owner, who may be in violation of the property maintenance code.

Before you send your volunteers out, contact each office or agency you believe you would report the results to, and verify whether that is the appropriate place. In addition to being a great learning exercise for your neighborhood association if you don't know this information, it alerts each office to the fact that you are beginning the neighborhood watchdog program.

How Do You Handle the Neighborhood Watchdog Function?

You might contact us with your local variations on the neighborhood watchdog theme. I know that in St. Louis where one of us sometimes hangs out, this function often is assigned to a problem properties committee of the neighborhood association. There are an infinite number of variations on this theme. Write up a community development ideas paragraph or two so we can pass on good ideas.

The other important theme, which we can't emphasize too much, is to work on your neighborhood in general if you have multiple problems. If there is no neighborhood association, you need to find some friends or acquaintances and start one.

For help with specific problems, type a term in the Search box to see if we have written about them. We show photo links to some of the most likely topics just below.

Of Interest to Your Watchdog Group Planning committee