How to Improve the Design of a Proposed Office Tower 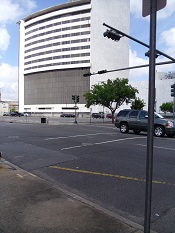 An office tower high-rise building can be a graceful accent punctuating the skyline, or a boring building out of scale with its neighbors, preventing any possibility of pedestrians shopping or stopping to chat with friends along the street.

The tower in a park look pioneered by the architect LeCorbusier in the early twentieth century is fairly tired.  It's difficult to connect to its surroundings. In the 2020's we demand a livelier look for our downtowns and even for suburban activity centers.

Most communities are so thrilled with the investment represented by a new office complex that it is difficult to get political leaders to stop the development entirely.

Next we propose some urban design suggestions for nearby residents, planning commissions, neighborhood associations, and elected officials who need to comment or vote on an application for an office tower.

7 Ways to Make the Office Tower Serve the Community Better

1. Especially if the proposed exterior façade is rather plain, and it's a basic rectangle with no articulation, see that the landscaping, public art, or entry feature provides a contrasting, and hopefully curvilinear shape.

When we say there's no articulation, we mean there are no protrusions or recessed areas on the building, no exterior niches, no receding and advancing of the basic plane of the façade. The front of the building is rectangular, and the sides and rear are three more rectangles. You get the picture.

If this is the case, the office building design will benefit by adding some variety to the architectural vocabulary and softening the exterior with trees and well-placed planting beds.

Yes, the world might offer a few examples of stark rectangular building planes on a rectangular foundation that are spectacular and artful due to their materials, coloring, siting, or other characteristic.


But trust us, eventually most communities are dismayed because it is tough to do enough beautification at the street level to offset the lack of interest inherent in these cubes or elongated cubes.

Also some subtle variation in size and placement of windows is very helpful. The familiar office building with large, reflective glass windows that are regularly spaced could benefit from more imagination.

2. Really watch out for overpowering nearby buildings. In general, keeping a building's mass similar to the mass of the buildings on other corners of an intersection makes each building tend to look appropriate. Think of mass as cubic area.

Just to complicate things, more mass can be effective if the setback from the street is larger. In general in urban design, similar setbacks from the street form the basis of a good design.

If you're building in a highly urban environment, though, there's not much that's more disgusting than seeing beautiful brick three or four story existing buildings on three corners, only to have someone propose a 15-story glass curtain wall tower on the fourth corner.

Unfortunately, such a building might be legal if your town or city doesn't have tight enough architectural, historic district, or zoning controls, but it's sure to be regarded as a mistake in future years. And if the 15-story building later becomes vacant or doesn't rent up as projected when it’s new, it could become a white elephant.

3. Try to preserve a walkable environment for the rest of the neighborhood as much as possible.

When the "tower in a park" look presents neighborhood design issues by disrupting pedestrian safety, it's not beautification as much as connectivity that's needed.

If there's to be a large office tower in the middle of a block, at least make sure that wide sidewalks are required. The sidewalks need to be wide not only for the sake of pedestrians, but also for visual proportion with the building.

Driveways into the parking area need to be carefully considered. Minimize the number of drives as much as practical, but even more importantly, minimize their width. Do what you can to slow traffic as it enters and exits from the parking lot.

4. If the proposed office tower lies in the middle of what otherwise is a shopping district, first of all, shame on you for not enacting better land use controls.

If this is where you find yourself and you have nothing that will prevent the property owner from proposing the office tower, at least encourage an interesting streetscape that lends visual importance to the public space near the roadway.

This could consist of gardens and benches near the street (and hopefully the sidewalk). Or you could have a series of public sculptures.

If the tower will be close enough to the street that window contents would be readily visible, set up the first floor as if it were a storefront. Granted, you won't have merchandise to show, but display some interesting teapot, pipe, cigar box, and/or antique typewriter collections.

If those items are too tiny to be seen, find some antique cars to display or something else quite large and colorful. The further the windows are from the street, the larger and more striking the individual items must be to command attention.

5.  If you can't avoid large office buildings, try grouping the towers and placing them at angles to one another.

Insist that the architect make the shapes slightly different, and definitely the heights should vary slightly. If the colors can vary slightly, that's helpful, as is ornamentation distinctive to each building but harmonious with the whole.

In suburban environments, tall towers often look odd too close to the street, so the building height should be limited when street width is fairly narrow. Of course, in a highly urban environment, build it up, build it dense, and build it to the front property line.

6. Devote special attention to any rear or side interfaces with residential areas.    If existing zoning forces your city to consider and ultimately approve a high-rise office building, at least it may be able to force landscaping or fencing buffers hiding any building mechanical systems, as well as softening the impact of large parking lots.   Hopefully either the zoning regulations for the district in which the office tower will be located require such buffers, or perhaps site plan approval or a conditional use is required before existing commercial zoning can be exercised.

7. Use the opportunity to address other community concerns about an arterial road.   For instance, you may be able to force the developer to pay for a turning lane, install sidewalks and bike lanes, erect wayfinding signage, or improve the appearance of the area through landscaping or even burying ugly overhead utility lines.

We've only scratched the surface. But hopefully we've made you think that you need to be serious about questioning the design of any office tower that is proposed for your town or city.  If you decide you need to oppose a rezoning, we have a page for that.

Especially if the proposal represents a significant investment for your community, it's difficult to second-guess an architect who is locally or nationally well-known.

But it's important to ask the questions. An awkward, boring, or stark office tower sure kills a lively environment faster than about any other single mistake you can make, especially if you are attempting a commercial district revitalization.