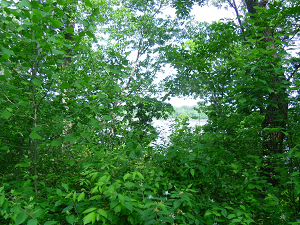 Open space is a catch-all term that includes land purposefully conserved, public and private parks, land in private ownership but not devoted either to agricultural use or to lawn, and land that is simply forgotten due to lack of demand. Many people would include water resources, such as rivers, streams, and lakes in their definition.

Some would argue that backyards provide some of the same environmental values as parks, conservation areas, and raw land. But here we'll concentrate on more popular meanings of the term.

The decision to be purposeful about open space strikes me as one of the least technical and most preference-based decisions that neighborhoods and local governments can make. Throughout history cities have regarded their wild land as an amenity, although often they have relented when real estate interests pressured them to "develop" historic commons or green beltways to enhance property values or facilitate commerce.

Then when finally development is all you have, the scarcity value of preservation and conservation of your wilderness and parks begins to be appreciated again. If you're reading this in a rural place, you might be thinking you have too much space. But that space is valuable for maintaining environmental sustainability. So the trick with open space is to have the right amount, of an appropriate type.

What are the advantages of open space? We are so glad you asked.

• It keeps the waterfronts alongside streams, creeks, rivers, and oceans available for public access.


• It provides habitat for the wildflowers, songbirds, and the world's other flora and fauna on which we depend in countless ways.

• Expanses of undeveloped land allow rain to percolate into the ground and replenish the groundwater on which many of us depend for drinking water.

• That same vegetated land also cleanses stormwater runoff before it enters a tributary or river.

• Trees and other vegetation provide some absorption of air pollution.

• The tree canopy both provides shade for immediate comfort of humans and animals and also contributes to the earth's ability to cope with climate change.

• The experience of being outdoors in a variety of settings, and being exposed to sunlight and fresh air, might not be essential for human happiness, but it's certainly conducive to mental and physical health for many people.

• Some of the spectacular natural features and entire landscapes that nature produces deserve to be experienced in context.

• Open space also can define the outer borders of a metropolitan area, helping to contain sprawl and thereby tamp down the exorbitant costs associated with urban tastes being distributed throughout a suburban or exurban landscape.

• In a democracy, it provides a place for large gatherings, ranging from concerts and commemorations to protests.

• It provides a welcome contrast from dense and intense urban development.

• It frames buildings, ranging from private residences to magnificent places of worship, with the gracious and unpredictable lines found in nature.

To many sub-groups, parks and forests have a negative connotation. If there's no policy and no planning in inner city neighborhoods and sometimes in suburbs, open space might well reflect any dysfunction happening around them. We've all seen parks become a hangout for people behaving badly (although safe parks are attainable with dogged attention, like many community development projects).

But with a deft hand, green infrastructure becomes a soft and subtle way to shape the form and character of a neighborhood, community, and a metropolitan region.

Right now, because society is so interested in climate change and generally going green, many communities are very positive about conservation and park opportunities. This leads to the conclusion that each community must decide for itself, through democratic means, its policy about open space.

Reasons to Conserve the Outdoors

If the space is to be people-oriented, some particular amenities make it dynamic, as the Project for Public Spaces has shown.

Pleasing proportions in relationship to the adjoining buildings add to the enjoyment, as do attractive and varied plantings and a bit of whimsy, such as the J. Seward Johnson "Allow Me" sculpture of a man offering his umbrella in Pioneer Courthouse Square in Portland. Water features bring out the best in us, except when pranksters decide to add blue soap flakes.

Some outdoor areas straddle the fence between indoor and outdoor, and frequently these serve the gathering place function. They feel as though they are not quite public but not quite private space either. This includes arcades, loggias, pergolas, courtyards, outdoor hallways, and now many private homes featuring gigantic windows and French doors.

Connections and Circulation Among Green Spaces

Some categories of green infrastructure, such as greenways (linear corridors of green space usually containing a trail) are designed primarily as connectors. They connect communities and people, adding to social capital along the way.

If you have not heard it defined, social capital means interwoven networks of networks of people. In other words, we expand our social circle. Outdoors, social distinctions can be minimized.

Urban open spaces not only connect the spaces between buildings, but they also can provide pleasing alternative methods of pedestrian circulation. In an urban park, we'd like to be able to walk across it diagonally and choose among its graceful paths. Great urban plazas of Europe allow free flow of foot traffic in any direction.

If conservation is the policy goal, it is usually implemented either on the metropolitan, state, or federal level. Certainly the whole world waits for conservation of the great rain forests, because of their impact on climate. Large contiguous parcels of open land are essential for the survival of certain species. If you're not a biologist, each species requires a range within which they must forage food, and some large species need a major chunk of forest, desert, ocean, or wetland to survive.

Sometimes conservation means providing excellent habitat for hunting and fishing. But sometimes it means preserving the diversity of the biosphere so that plants and animals needed to prevent or cure disease, as well as provide food and other materials important to human life, will be preserved. Both are human-oriented goals, one short-term and one long-term.

Conservation goals are achieved in four primary ways, described below:

Sometimes it's a spiritual sense of awe at the diversity and magnificence found in nature that intimidates us into thinking probably we should preserve it. Can you imagine happening onto the Grand Canyon or Old Faithful if you hadn't been told about these wonders at an early age? Certainly uniqueness justifies preservation in nature, just as in buildings and neighborhoods.

Research shows that beauty is an important element in community attachment, which in turn is vital in keeping talented mobile members of the workforce in your town.

Often it's important to conserve some land around a particular phenomenon just to preserve the ecosystem that feeds the particular object of our admiration.

Sometimes an open space preservation effort stems not so much from the desire to protect the unique features of a particular piece of land as from the vague and qualitative feeling that we need to save land for some better use in the future. Land banking is a technique in response to this feeling. (We should add here that what we are describing is not particularly related to the use of the term land bank in urban settings, where it commonly means neglected land that a local government acquires through tax delinquency or other means.)

Land banking could be a great policy for communities at the urban fringe, where development is growing haphazardly all around. Another pertinent time to land bank is when an urban neighborhood is deteriorating rapidly and needs the steadying presence of a nonprofit, cooperative organization known as a land trust.

A very interesting public-private project in this general category is underway now; it's called Redfields to Greenfields. Redfields are commercial properties that are financially distressed, or "in the red." The goal is to scoop up these overly ambitious commercial projects that property owners or banks are ready to walk away from, and to create public value by either land banking them or converting some right away to public parks.

As an aside, though, we'd rather see assertive attempts to put redfields on the market for re-use than immediately assuming that buildings should be demolished and converted to open space. The exception would be when you've determined that your community is lacking in open space.

Talk to your community. The conversation should be about immediate versus future needs, about generation of economic versus spiritual wealth. Should we preserve our options for discovering new medicines by conserving plant species? Do we need to set aside land now in case urban land is unlivable after some type of attack?

Maybe some parents and grandparents want to raise children who know what nature is and appreciate the healing properties of a good walk in the woods.

But have the conversation; it's worth doing. You'll discover whether people feel cramped, or whether activity is dispersed into too many different locations already. You'll learn if people want to be outdoors or to tame the outdoors. You may be surprised to learn how willing your community is to allow some park land to be transitioned away from unused lawn back to the native ecosystem in your area.

And we hope you'll learn how a greenbelt of open space around your metropolitan area could help separate the city from the countryside. The latter has been regarded throughout history as a most admirable goal.

The secret of open space is this: open space planning is nearly always required if you want to preserve it. Do an open space inventory, create criteria by which open space opportunities are evaluated, make a plan, and then be patient until the opportunity to implement your plan presents itself. But don't allow your natural systems wealth to be nibbled away for petty projects.