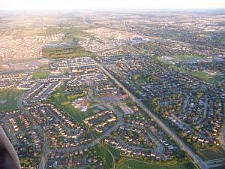 The quality of regional governance often makes a big difference in the success of your metropolitan area. In turn, prosperity and vitality of the region can spur revitalization of older neighborhoods and kick-start new ones, and the lack of good governments and non-profits in a region can impose new barriers and limits on your neighborhood-level work. We'll say a little more about why neighborhood leaders and activists should care under the next heading.

People in academic and research circles have come up with this somewhat awkward regional governance term to describe the quality of metropolitan decision-making, regardless of whether it occurs through the formal or informal structures. We answered a question about the significance of strong institutions in governance from Africa, but it is essential that somewhere within the structure of a metropolitan area in a highly developed economy, which is what we are considering on this page, those same "strong institutions" must reside.

While some areas actually have consolidated their municipalities into one, or merged their principal city and county governments, a broader concept is in play here.  Consolidation is not necessarily what we are considering here, although it may be a viable pathway toward creating strong, resilient institutions for some regions.


Metropolitan success lifts your own individual community. Do we need to say that metro failure really rains on your parade? Even the severe under-performance of a small part of the region means that your city and its suburbs are not enjoying as much prosperity and clout as you deserve.

You might think we're talking up the notion of regional government, and some people become very agitated about "another layer of government."

Whether we define metropolitan success as economic competitiveness, quality of life, or ability to generate an agile and timely response to new challenges, a nimble and wise decision making apparatus sure beats a clunky one.

Where the governments have not actually consolidated into one unit, governance is often a crazy quilt of loose understandings and habits, signed intergovernmental cooperation agreements, governmental districts covering only one particular function, a regional planning commission that works or doesn't work, a council of governments that may be active or dated, and in the U.S. a federally required Metropolitan Planning Organization (MPO) that coordinates any transportation planning and funding in which the federal government is involved. This includes most major roads.

And we think not all of the metropolitan governance is exercised by governments either, just to confuse you further.

We would like to stretch the term to include citizens leagues, powerful non-profit groups such as a United Way, Chambers of Commerce or functional equivalents, and the major foundations, universities, or cultural institutions that contribute to the collective decision making in a metropolitan area.

While usually the people who discuss regional governance refer to actual taxing entities, stretching the term to include these other actors may be valuable to your thought process.

From our work throughout the U.S., we have identified four common issues in regions where governmental fragmentation, contentious local governments that argue all the time or tolerate major and minor scandals, or simply lack of intergovernmental cooperation mechanisms are putting an upper limit on the quality of life in some neighborhoods:

1. Only the best organized and most vocal neighborhoods, which often correspond to those that are the best educated or best linked to the historic power structure, receive the quality of municipal and even regional services that they deserve. The disparity between the "have" and the "have not" neighborhoods and communities becomes striking. This accelerates the process of decline in housing value and neighborhood reinvestment in modest neighborhoods.

2. People become discouraged with government and cynical about its intent and functioning. This state of affairs carries its own negative impacts, but for our purposes, it also makes it more difficult for neighborhoods to develop a cooperative problem-solving relationship with city hall. Great local government relations are a hallmark of effective neighborhood organizations, but when the relationship is always suspicious, most of the energy of a neighborhood association or other community group becomes concentrated on being paranoid. More positive people then stop attending neighborhood functions.

3. Problems that cross boundaries don't get resolved. Competition for businesses causes municipalities to give up too much to private enterprise. Sidewalks stop in the middle of the block. Dramatically different qualities of street resurfacing may be experienced on a short drive through a neighborhood. Criminals and young rabble rousers simply cross a municipal boundary to evade police for the moment.  Entire quadrants of a metropolitan area suffer housing decline because of lack of a coordinated strategy.  Available funding is diluted to the point of ineffectiveness because the pie must be cut into so many slivers. All of those sound like familiar neighborhood issues, don't they?

4. In municipalities where factions form within the local government and where personality clashes predominate, there isn't enough time and energy devoted to calm, thoughtful deliberation about policy. Too much energy goes into the drama. This means that middle neighborhoods and declining neighborhoods don't get the attention they deserve.

Let's talk about how your region got into this situation. Often certain elements of the effectiveness of regional governance actually depend on historical accident, strong personalities, and quirks of state law.

So if you think your region doesn't work together when it should, and that fragmented decision making is a problem, don't be too quick to assign blame. Start learning the history of how things became as they are.

In addition to history, whether carefully scripted or accidental, regional governance and the quality of it reflects the culture of the people.

If the city is laid back, the metropolitan area as a whole may be slow to respond to challenges, notice emerging trends, and take action. If the culture consists of people who are hyperactive all the time, arguing and flamboyance may be manifest in the regional governance structures or realities.

If people are too nice to say what they really think, nothing will get done. If the culture is that people are only in public service because it's an ego trip, you'll be hard pressed to accomplish much.

In New England, the town meeting can be a thing of beauty or more of a nightmare, depending on personalities and the history of important families. And the New England town may be regional or parochial in its outlook, just like suburbs in metropolitan areas.

For the rest of us, there may be literally no place to work out our differences or to act on our common problems and opportunities.

Or conversely, there may be so many governments and non-profits that the metropolitan area is mostly a cacophony of talking, but little effective action.

How to Forge Effective Regional Alliances

It is a big step to move from being a community or neighborhood leader to a metropolitan leader. If you decide you need to enter that arena to accomplish what's necessary for your own community, be prepared to have your ego trampled, your agenda compromised, your ideas stolen, and your viewpoints misrepresented. Other than that, it is really fun!

Like many things in life, the highest impact changes are the most difficult but also the most worthwhile. If you could pick from only five things to work on in terms of regional governance, try the ones we describe below.

1. Reduce the number of governmental units if it seems feasible at all.  Assure that each remaining government can forge a civic spirit, have enough interested and educated citizens to run for office, and raise enough revenue to meet resident need for public services. You want governments that have a fighting chance to deliver basic services competently and respond to citizen needs respectfully. If your region has too many governments, it is very difficult to achieve the transparency and accountability that citizens deserve, in part because local media will do a poor job of covering all governments.

2. Reduce the concentration of poverty in particular geographic areas. To say it another way, help open and reward avenues for the not-so-poor geographic areas to accept and mentor some lower-income households.   Make lower-income neighborhoods so compelling in their attractiveness that middle-income people want to live there, providing you can do that without displacement. Look for innovative and winning solutions to concentrated poverty.

See the community poverty, housing affordability, and mixed-use development pages for more ideas for describing the problem and inventing solutions.

3. Reduce urban sprawl, because by so doing you reduce transportation, environmental, and communication costs, and you also contribute to understanding and equal opportunity across economic, social, and ethnic lines.

The link on the main navigation menu of this site takes you to pages about regional factors that overwhelm local communities, including sprawl.

4. Share revenues from real estate, income, and sales taxes so that governments have an equitable distribution of resources for the public sector. Regional revenue sharing may be necessary to bring failing school districts up to par as well.

5. Encourage innovation and creativity in general in your metropolitan area. You'll need creative thinking to address the rapid pace of technological and economic change,  climate change challenges, and a host of other evolving circumstances. Start innovation labs, clubs, hubs, and networking events. While these activities often may be perceived as economic development measures, you can expand the concept so that neighborhoods can learn from one another, artists and visionaries can interact with engineers and politicians, and older children, young adults, and immigrants add their unique visions to the community mix.

So What Difference Does Thoughtful Government Organization Make?

A 2001 study by Jerry Paytas at Carnegie-Mellon University showed that fragmentation of governments within a metropolitan area reduces the region’s economic competitiveness, and that a centralized state government also depresses the region's economic fortunes. Another study by Arthur C. Nelson and Kathryn A. Foster also supports the theory that a stronger central government is better at producing regional income growth than many smaller ones. This duo produced other research with similar findings around the same time period.  More recent studies have sometimes cast doubt on this theory, by the way, and say that polycentric groupings of governments can achieve the same or better efficiencies and quality results.

Taking the earlier research to its logical conclusion, it sounds as though a region must consolidate its governments, at least to some extent, and deal with its own conflicts and struggles internally, if it wants to be as prosperous as possible.

Regional economic competitiveness and personal economics aside, though, it's just much more pleasant to live in a metropolitan area where civic leaders get along, address problems straightforwardly, and deal with challenges rather than sweeping them under the carpet.

Everything from a crime spree to a natural disaster to loss of a major employer is easier to address when the players are comfortable in working together.   We need to become much more adept at regional solutions if we are to minimize negative impacts of climate change, rapid economic shifts over which local governments and citizens have no control, and local impacts of the massive immigration and refugee flows world-wide.

So while it is certainly true that a region can be well-governed and still have a number of governmental units and types that form ad hoc collaborations to address specific concerns, it is critical that neighborhoods and communities demand a well-functioning, professionally managed government that brings as much equity among social groups and as much input from the public as can possibly be achieved.