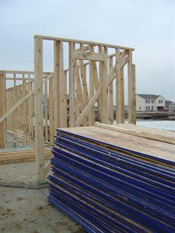 A subdivision regulation is a municipal ordinance mandating a review of a proposed division of land into separate lots for resale against pre-determined standards. It is designed to guarantee adequate streets, utilities, drainage, and means of vehicular egress (leaving the development) and ingress (entering the area). Individual parcels proposed for sale, called lots, are reviewed for minimum size, appropriate shape, and access to roadways. The  process culminates in most states in the U.S. in an action of a city or town's governing body approving an overall map called a subdivision plat. Sometimes a planning commission or staff person is empowered to approve the subdivision.

The process is sometimes confused with zoning.  Indeed the two land development processes could be proceeding during the same time frame in a particular instance. But procedurally and legally, they are quite separate.

Even the name is a bit misleading. "Subdivision" leads to visions of similar houses all lined up, whereas in a legal sense in most states and towns, the word simply means the division of land into two or more parcels for purposes of legal sale.


In some locations, literally creating two separate parcels from one is a subdivision. This might be called a lot split, and each lot might be 20 acres.

Other places exempt creation of a few lots, and still others create a streamlined process for "minor subdivisions." A minor subdivision might be defined as five or fewer lots, or two or three lots, for example.

Sometimes the subdivision procedure isn't required until you are creating lots below a certain acreage, such as maybe 10 acres or 5 acres.

The purpose of subdivision regulation is to assure that all lots offered for sale, whether they are 40-acre "lots" or quarter-acre lots, are mapped and tied to surveying reference points so they can be located accurately in space.

It is considerably simpler to record the transfer of Lot 28 of Happy Hills subdivision, for example, than to record a page-long legal description based on dimensions, degrees, and other surveying terminology you don't even want to imagine.

The approved plat is then "recorded," just as a deed for the sale of a home or farm is recorded, in the appropriate county. Therefore the map and surveying information becomes a public record, and anyone can walk into the courthouse and see the plat.

Another purpose of subdivision regulation is to provide a means of requiring and assuring that particular mapped public improvements, which meet the local government's specified standards, will be made by the developer of the subdivision.

These "public improvements" include streets, drainage provisions, sanitary sewers or other method of handling sewerage, a public water supply (or indication that water will be provided only through private wells), and so forth.

Usually the developer must purchase a bond to guarantee that these public improvements will be constructed, or actually construct the improvements, prior to the sale of any lots. This protection prevents people from buying a lot in a subdivision only to find out they have no street access to their lot, either on a temporary or permanent basis.

The municipality also reserves the right to inspect the streets and other required public improvements to assure their construction meets their published standards before the municipality "accepts" them for public maintenance. Usually a time limit for the completion of the public streets and other required improvements is specified in the subdivision regulations also.

The subdivision regulation must carefully specify the process by which the developer posts the bond. Also the ordinance describes how inspection of required public improvements, including streets, is to occur; how the transfer of maintenance responsibility from the developer to the city government is to take place; and what happens if platted improvements are not made.

Your regulation also should include arrangements for specifying how amenities or requirements to be built in the subdivision will be maintained. Read our answer to a site visitor's question about retention pond ownership and maintenance to gain a glimpse of problems that can arise when maintenance questions are not settled in advance.

If a gated community is proposed, subdivision or planned unit development approval should specify how the gates will be controlled, operated, and maintained. Some jurisdictions also will want to review or be made aware of the deed restrictions, also called covenants, that are being placed on the new development.

Even if there is no zoning law in effect, subdivision regulations can prevent the creation of lots for sale that are too small to be viable, awkwardly shaped parcels, and inadequate water lines and wells, sewer or septic systems, and emergency access. State law might set forth minimum standards for subdivision, which can be followed if the subdivision takes place outside an incorporated area, or sometimes counties govern the subdivision process.

You will notice that our description here excludes many topics that neighbors might be concerned about, such as the aesthetics of the homes to be built, price of homes out of line with what neighbors want, and the reputation of the developer or builder. These are to be dealt with through the zoning ordinance and other development approvals that may be described either in the zoning law or through stand-alone laws about planned developments.

Many contemporary wrinkles on housing development, such as new urbanist projects and conservation-minded subdivisions that cluster housing, are not well addressed by traditional subdivision regulation. This means that planning staff members, city councils, planning commissions, and professionals involved in real estate, development, engineering, and development financing need to be reviewing their ordinances to make sure these forward-thinking developments are not discouraged by the subdivision review process established long ago.

Of course it sometimes becomes much more complex than this. Common ground, easements granted to utilities, entry monuments, conservation areas, no-build hazard protection areas, and many other features often are shown on the plat.

Details such as turning radii (the sharpness of a curve at a corner), lot dimensions, lot arrangement and numbering, proposed grading of the topography, stormwater runoff detention and retention facilities, street width, street type, street profiles (showing the grade or slope involved and a cross-section of the depth of each material from which the street is constructed), sidewalk locations and width, and so forth also are stipulated on different pages of the plat and subject to approval. Driveway slopes or steepness of the grades on a finished lot might be restricted.

In the very near future, we can expect to see subdivision regulations require a delineation of predetermined aerial drone routes for package delivery. This will add a layer of complication to the utility easement review to which we are accustomed, but we will need to adapt if we are to intercept concerns that these delivery drones raise about privacy and safety in back yards and on sidewalks. These may take the form of fly and no-fly zone designation, or they may simply delineate urban or suburban flight corridors more narrowly.

Scenic vistas, wellfields, existing lakes, wetlands, or hillsides might be mapped for protection. The location of any required groundwater monitoring wells will be specified.

Subdivision regulation also might prohibit the subdivision of floodplains or other environmentally sensitive lands into separate ownerships at all.

Sometimes 5% or 10% of the land in the subdivision is required to be "dedicated" to the local jurisdiction for open space or park land. If you do this, make sure that your state still supports the legality of such a policy. These required dedications have been decreasing in popularity, since many cities and towns realized that the small park parcels they were gaining did not present very good prospects for useful parks.

So please assure that the jurisdiction can approve which land is dedicated; otherwise, you will join the ranks of the many municipalities that have learned over the years that a ravine off the beaten path is not of much use as a park.

Many municipalities provide that the developer can choose to contribute money instead of donating land for a park. The amount of money to be contributed usually is usually a percentage of the pre-subdivision value of the land.

One particularly tricky area is what types of dead-end streets are allowed. Often suburban subdivision regulations now require cul-de-sacs, or rounded turnaround areas, to be constructed at any permitted dead ends.

A more contemporary movement is to prohibit cul-de-sacs and old-fashioned dead-end streets entirely, by requiring that adjoining subdivisions build connections between them. A rectangular grid street system provides drivers with more options.

This is certainly a more earth-friendly and traffic-friendly solution, since all of us who live in suburbia are familiar with the "can't get there from here" dilemma. Subdivisions consisting of many cul-de-sacs really force all of the traffic out to the main road, which then quickly becomes clogged with traffic and also deteriorates faster.

The state of Virginia now is taking the lead in prohibiting cul-de-sac development, on the grounds of the increased maintenance cost for arterial roads if virtually all subdivision traffic must use that road. For more on designing the system of streets, see our page about street hierarchy.

A subdivision regulation also provides that the plat indicate the name of the subdivision and name the streets. Occasionally I've seen a planning commission rebel about some particularly unwise choice of street name, but in general the criteria for approval are simply that these names do not duplicate what is otherwise present in the community.

More about the Subdivision Approval Process

Common practice has been that the municipality requires submission of as many copies of the preliminary plat as necessary to allow review by all relevant utilities, fire departments, drainage districts, parks entities, adjoining jurisdictions, and other potential commenting agencies or authorities.

Some jurisdictions want the plat to be submitted electronically, allowing a wide range of potential stakeholder agencies to view it and comment digitally for other reviewers to see.  Digital plats have now become the norm.  This is a welcome relief from rooms full of yellowed paper, or outmoded formats such as microfiche.

In many states there is no formal public hearing, so any political objections that citizens would have would involve a general gripe much like any public issue that didn't appear on a formal agenda.

In my experience, though, opposing a subdivision through political means is pretty tough. If you have the urge to do so, you missed the boat--you should have voiced your re-zoning opposition earlier in the game. Local design guidelines can be helpful if citizens frequently object to subdivisions because they don't like the aesthetic qualities of the proposed housing.

State laws govern subdivision regulation, so it is a good first step to visit your state's website and read the subdivision requirements. Keep in mind that  individual locations can make stricter laws on this topic than the minimums that may be spelled out in state law.

Your local experts on this topic will be first and foremost the city staff members. You also may find knowledgeable civil engineers and attorneys who often work with  subdivision developers, even though they may have a vested interest in steering you toward a particular point of view. Planning commissions should listen to these professionals, as well as staff planners, as subdivisions and the policy relating to them are debated.