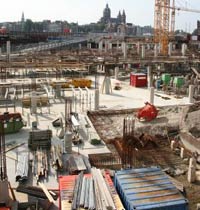 Tax increment financing, usually called TIF for short, is a means of financing public infrastructure connected with real estate development or redevelopment, and sometimes subsidizing the development in general. Although frequently controversial, TIF still is a favorite among the tools and incentives available to governments to promote economic growth and housing construction.

Almost every state in the U.S. allows municipalities to grant some form of TIF, and this technique has been used in other nations as well. Internationally, the term may be value capture or other phrases.

Recently I attended a vacant land conference, and when the speaker mentioned TIF as by far the most common form of economic development subsidy, I saw almost every head nodding yes. So if you are involved in local government, or just a concerned taxpayer, you should know about this development incentive tool.


How This Economic Development Technique Works

The idea is to use future increases in property values, and therefore in property taxes that will be due the municipality, to finance an improvement in the here and now. The increased tax that the local government is expected to collect in the TIF district over a designated period of years, often 20 or more, is the "tax increment."

The municipality then typically takes the promise of the tax increment to the bond market to obtain the money it needs to construct street, traffic signal, sewer, or other public infrastructure improvements to support a development.

In some instances, the support may actually take the form of contributing cash to the developer's cost to give the developer an incentive to do the project or allow the developer to make a reasonable profit in a risky situation. Usually this is where a proposal becomes sticky politically.

Most frequently the development is a commercial or industrial land use, although a couple of states do allow residential tax increment financing as well. A TIF may apply to only one parcel of land, sometimes as small as a city lot, or to quite a large area. Development plans tend to be fairly firm in the case of one parcel, but often there may no development proposals on the horizon at all if a large district is created by the local government to give an incentive for one or several developers to work in an area.

It's also possible that the local government takes a "pay as you go" approach, avoids indebtedness, and simply uses the increment as it is paid into the city to finance capital improvements in the immediate vicinity of the development on a very gradual basis.

Note also that a few states allow the tax increment from sales or other kinds of taxes, not just real estate property tax, to be incorporated into the TIF deal.

In some states and regions, local governments have become quite loose in their interpretation of the state laws, and they allow developers to basically subsidize actual normal construction. This quickly gets out of hand, as developers point to what was given to some previous developer and demand equal treatment.

The theory behind tax increment financing is quite pro-social. It should help dilapidated areas become more attractive to investors because the public sector will spruce up the adjoining public realm, or in some instances, the public sector will enter those murky waters of actually subsidizing the development itself.

Some states require that the land in question be declared "blighted," which might involve anything from being under-utilized from an economic standpoint to being a neighborhood full of sub-standard housing. In practice, blight designations often are fudged a bit, especially if state law is vague about what constitutes blight.

In spite of some negative-sounding comments further in the page, we would encourage your looking closely at this economic development tool if your business attraction program requires that you satisfy the need or desire for larger, more extensive, or more modern infrastructure.

The ability to target a specific geographic area for new investment strengthens the argument for the use of tax increment financing. However, the precise boundaries of that district then become very important.

Part of the appeal of the use of tax increment financing is that no public vote is required. Many states require votes on various types of bond issuance for other public purposes. Another advantage for decision-makers is that they can be seen as adhering to their "no new taxes" pledges and still provide additional infrastructure for the community.

TIF seems to be becoming more and more popular, and more and more abused. So like any other economic development technique, it can be a gift or a burden to the citizens of any given municipality.

The benefit is that the municipality does not have to go begging to the state or federal government to request a grant to allow it to afford the public improvements that a private investment will need to be viable.

The problem then becomes that tax increment financing districts are subject to local politics and maybe political favoritism. Sometimes, like with any redevelopment financed by any method, the redevelopment itself drives out lower-income people and results in what is called gentrification (displacement of lower-income residents by higher-income ones).

Even more dramatically, as we mentioned above, most states require a legislative finding by the city council that the TIF district is "blighted." Sometimes it requires quite a stretch of the imagination to see a well-maintained and fully-occupied 25 year old office building in a posh suburb as blighted.

It's hard to understand why a big box store (such as a large discount store) would need public financing for road improvements when they propose to construct a new store on a four-lane road. The reality, however, is that your huge discount store might decide to go to another suburb if you don't use public dollars to make sure that entrances to the store's parking area are wide and easy to navigate.

And occasionally I've heard of rural or undeveloped areas becoming TIF districts where it seems that the governments in question should be requiring the developer to build the infrastructure instead.

As time goes on, we're seeing more and more permissive definitions of areas that qualify for TIF. Now, in addition to blighted areas, you might hear that your state allows TIF in what they might call a conservation area, essentially an area in danger of becoming blighted, or in an economic development target area designated by the local government. The latter could be almost anywhere.

Another big problem is that taxing districts other than the city government are foregoing tax revenues, but usually they don't have much input into the TIF decision. Lately some local governments have been allowing the TIF deal to make it possible for schools to receive some additional revenues, since usually the school district relies on the property tax base extensively.

The municipality makes the decision to forego future revenue growth, but the school district, library, community college, and other such districts suffer if the municipality is wrong. These districts only receive the promise of a higher future tax base. That prediction of a higher future tax base may vanish in 20 or 30 years as the new development itself becomes obsolete.

By the expiration of the TIF district, the developer may have decided that they've made their profit and they're not going to reinvest in the maintenance, management, and refreshing that all developments need by that time.

One other substantial disadvantage should be mentioned. The entire premise of tax increment financing is that the assessed valuation of the property will rise after development or redevelopment.

The government, however, is left "holding the bag" if there is no increased assessed valuation, or if it falls back down to its previous level toward the end of the TIF period. Since we've just lived through a couple of bubbles, local governments should consider this possibility.

It may require the TIF-granting municipality to dig a little deeper into development finance than may be customary, but the fact that the entire scheme depends on this increased assessment during the entire period of tax abatement  merits that extra look.

This latter factor is an argument for keeping the tax increment financing term as short as possible also. Seven years may seem less risky than thirty from this perspective.

The best website we've found for tracking what is happening with TIFs and other development subsidies is called Good Jobs First, and it's well worth the read. It shows state-specific facts on development incentives.

In instances where the development truly would not have happened "but for" the TIF funding being available to remedy some lack of public infrastructure, many citizens think their governments are striking a good bargain.

In one of our states, a special business district provision allows for an extra layer of taxation to provide security patrols, flower boxes, promotional events, and other cooperative ventures, as well as financing of public improvements, within a business district.

Most states allow for ordinary special assessments, in which property owners agree to pay for sidewalks over a period of years. Investigate whether such a technique could allow the development you hope to attract to finance public improvements for you.

Don't be too quick to decide that tax increment financing is the only vehicle available to you for providing infrastructure and amenities you need to incentivize investment.

More Pages That May Be Relevant to TIF Debates