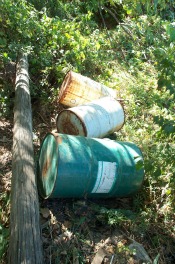 The terminology distinctions among toxic waste, hazardous waste, and brownfields are tricky. The key point for a community leader is that you don't want any of them to remain in your town if it's practical to remove the bad stuff and restore the land to allow redevelopment.

We called this section toxic waste simply because that seems to be the most commonly used term among neighborhood folk. Toxic simply means something is poisonous.

In the U.S., there are four different federal lists of hazardous wastes. Those are the F, K, P, and U lists, if you're keeping track. We don't make this up this nonsense. And then your state government might have a separate classification system.

So search for Environmental Protection Agency (EPA) list of hazardous wastes if for some unfortunate reason you need to know.


Hazardous seems to frighten people more than toxic, although maybe not always. In practice, just keep using these words semi-interchangeably, and an expert will correct you if it's important.

In the U.S. the federal government began to be concerned about responsibility for actually cleaning up the environment during the 1970s. The two key pieces of federal legislation described below grew from that earlier environmental movement.

1. The Resource Conservation and Recovery Act (universally called RCRA) of 1976 regulates waste that industry generates right now. The waste may be stored on site according to regulations, or it may be transported elsewhere.

Shipping it doesn't relieve industry of responsibility, however. If something goes wrong during transport or at the disposal site, industry can still be held responsible under the "cradle-to-grave" doctrine.

2. The Comprehensive Environmental Response, Compensation, and Liability Act (CERCLA) of 1980 regulates cleanup of toxic and hazardous wastes that were generated previously.

Let's concentrate on CERCLA, because EPA is supposed to be enforcing RCRA. But when your community follows the CERCLA process, you can actually generate new sites for development.

CERCLA created the Superfund law, as some people will know it, in response to the Love Canal situation where an old toxic waste dump was contaminating a New York town. The Superfund is supposed to apply to an "imminent" and "substantial" threat to the environment or public health.

There are about 1,300 sites on the Superfund's National Priority List as of February, 2019, with another 50 proposed sites. The responsible party is supposed to pay for the clean-up, and the federal government has broad authority to supervise and regulate this process.

The responsible party might be the owner of the property, a past owner who allowed the contamination to occur, or even someone who transported or arranged for the transport of hazardous material to the site.

Popularly this is as known as the "polluter pays principle." The EPA is responsible for overseeing the process.

However, in maybe a quarter of the cases, the responsible party either can't be identified or can't afford the clean-up, so this is what the "Superfund," more properly called the CERCLA trust fund, is supposed to cover.

You may be interested to know that when a responsible party is located and does have capacity and willingness to pay for the cleanup, the company is not required to reports its costs. So no one really knows the entire cost of cleanup.

New appropriations for cleaning up Superfund sites are lagging behind the need, so there is no shortage of work to be done to urge Congress to move more swiftly on this issue.

Since courts have said that current landowners can be held responsible for contamination on their site, even though some think that was not the original intent of the legislation, prospective property owners always want to perform at least a Phase I Environmental Site Assessment when buying what may be a brownfield or even worse, a dangerous toxic site.

The "Phase I" assessment,  as you will hear it called, usually is required by lenders for commercial real estate purchases and by local governments for proposed changes in zoning (for instance, from industrial to residential).

A Phase I assessment involves a site visit, interviews, and mostly searching records to understand the history of uses that have occurred on that parcel of land.

If deemed likely that there is some source of contamination, hazard, or pollution present, the owner, or developers or local governments pushing on the owner, may require a Phase II assessment, in which actual soil samples are taken, and other types of physical evidence is examined.

Just so we complete that thought, Phase III is the actual cleanup. You will hear it called remediation also.

A developer may be able to remediate as he or she does normal site preparation; for example, some excavation might be required both for construction and remediation.

Also a developer may be able to leave some pollutants and contaminants on the site if they are consolidated on site and "capped" or contained in some way, often by being paved over with concrete. The jargon phrase for that is a risk-based closure.

The owner might have to place a deed restriction on the property to notify future purchasers of those conditions. If you don't understand what that is, see the navigation menu for a whole article explaining the concept.

After all of this, it's still possible to purchase insurance against any future liability.

So in the end, it's very possible to deal with toxic waste, which is a sub-category of hazardous waste. It's just a business expense, and a deterrent to development.

In much the same way that new construction development is easier than redevelopment, it's just easier for a developer not to have to think through all the toxic waste, hazardous waste, or brownfield issues.

For more information on brownfields, head over to that page. Having something described as a brownfield is less ominous than hearing about toxic waste.

The brownfield concept is interesting because the EPA has positioned it to include both real and perceived barriers to redevelopment because of contamination of some type.