Traffic calming is the art of slowing, reducing, or diverting auto traffic to improve safety for pedestrians, cyclists, and motorists. Often cities or neighborhoods accomplish this through a barrier or oddly shaped roadway. Narrowing streets, through what people are calling a road diet or a skinny street program, is another technique that actually reduces speeding.

We also think that traffic calming can be important in increasing motorist awareness of businesses and amenities located in your community. If drivers can set aside their frustration at having to drive slower, they also will find that their slightly longer trip times are much more pleasant. 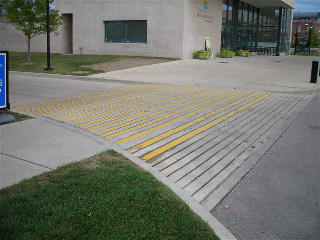 If you can frame the issue properly in the popular imagination, our experience is that you can increase the willingness of residents to put up with and even embrace traffic calming. As one person put it in a recent focus group we led, if it means that pedestrians and bicycle riders are safe, we would be okay with a 20 minute travel time instead of 15. Another said that although her octogenarian grandmother is empowered with hearing aids and a walker, it still seemed dangerous to walk across a fast-moving four-lane street to her library. A little less selfishness about traveling fast would yield plenty of social benefits.

When discussing this topic, some experts look at 3 E's as key: education, enforcement, and engineering. So while many commentaries focus in tightly on built solutions, the engineering E, the other two are very important also. Your community group can undertake education directly, and also influence your local municipality to step up enforcement.


In many areas, enforcement of speed limits has grown too lax. But if that is true in your community, you'll have to protest more frequently than other neighborhoods to change the situation. But enforcing existing laws is an efficient traffic calming measure.

Below we will describe the four major types of built or temporarily installed traffic calming devices in common use.

In plain English, speed bumps would be the best example. In some places a speed bump is lengthened out to what is known as a speed table, so that a vehicle will have to go slower longer, because the driver knows that the second bump is coming.

It's also possible to raise an entire intersection, or to insert more of a speed table (as opposed to a bump) like the one shown at the top of the page. Instead of a bump as such, a different texture might also be used. Although horizontal rather than vertical, the ridged rumble strips you find beside some highways are examples of a texture change that seems to cause a reflexive slowing or at least heightened driver attention to what is happening on the roadway.

We are not big fans of the speed bump or speed table, except in situations when something needs to be installed promptly and with minimum fuss from an engineer. We also have seen these interventions used successfully when blocks are longer than typical, which tends to result in more speeding.

Under this category, we would include traffic circles (now usually called roundabouts), chicanes (in which turns or curves that are a little difficult are built into the roadway deliberately), and realignment of the road so that it is not as straight. Sometimes center landscape islands or unpredictable medians, either landscaped or not, are installed where there formerly were none, which forces cars to slow down and swerve around them.

One of the editors of this website personally hates roundabouts, claiming they make her dizzy, but in spite of that experience, we have to include it as a real option being used in many situations.

Our experience is that simple landscaped medians, perhaps of uneven shapes, are more aesthetically pleasing and can serve to slow down stormwater runoff and provide a measure of shade and cooling as well. The disadvantage of the median or island, of course, is that they do not replace stop signs, as roundabouts should do.

When a road is narrowed for a short stretch, this also requires that drivers slow down for a moment to understand what is happening and thread themselves through a reduced width. These may be called neckdowns or chokers.

More important is the long-term trend toward more narrow streets, which force greater attention. Somehow the neighborhoods with narrow streets and on-street parking on both sides of the street don't really have more collisions than the wider streets where everyone has a four-car driveway. That's because of the greater attention required to navigate through the narrow street with the unpredictable parking pattern.

This is the skinny street or road diet trend. In addition to obvious benefits of reducing pavement and therefore stormwater runoff, the narrow street makes it easier to be neighborly across the street, slows traffic, perhaps separates bicycles, trucks, and buses from other traffic, and discourages what people may call "through" or "cut through" traffic in a neighborhood.

If you can't tell already, we really like the trend toward giving narrower streets more consideration. They promote walking by lessening the curb to curb distance, and they promote patronizing of local shops and restaurants. One caution is that in one instance, we saw the road diet squeezing out bike lanes altogether, and in another example, the bicycle lane also was much narrower, increasing the hazard for cyclists rather than decreasing it.

Anything from an attractive center or side planter to those really pretty ugly sawhorses with orange and white stripes that you see in some subdivisions can force traffic to slow down, move, or both. If you feel this will be the best solution for your neighborhood, we advise you to think through the aesthetic impacts as well as the traffic effects. We have seen some beautiful entry features and landscaped islands, so with some thought, they can become assets to your beautification program as well as traffic taming.

Cul-de-sacs and dead ends may have the effect of slowing traffic, particularly if they are installed at the culmination of a long straight segment of road or street. However, both have negative impacts on walkability, forcing residents to go out to a main road before being able to walk down the adjacent cul-de-sac. They are emblematic of urban sprawl and tend to slow emergency response times and easy selection of alternative routes in case of construction delays or accidents. Altogether we hope that creating more cul-de-sacs is not on your planning commission's list of things to do.

If you feel you have to research this subject, the best reference book is probably one you should try to borrow from your library or local office of the state transportation department. It's too expensive for citizen leaders. Look for U.S. Traffic Calming Manual, by Reid Ewing and Steven J. Brown.

The Problem with Engineered Traffic Calming

All of these traffic calming devices are subject to some deterioration of effectiveness over time, as drivers who frequent a certain road or street become accustomed to them. So if you are considering asking for one of these measures in your neighborhood, choose something that it's difficult to adapt to.

For example, I can easily learn where the median planter is and simply adjust my driving, but if I can't see the other side of the roundabout, I may be apt to go through that intersection rather slowly each time.

The second problem with engineered solutions is that they present new dangers, even as speed may be slowed and attention may be refocused on driving. A driver unfamiliar with the area may hit the curb instead of following your fancy chicane! Roundabouts really are confusing if there are more than two streets coming together. We believe that these are particularly difficult for older drivers to navigate confidently.

The argument is that people will slow down, but not spend extra time in the intersection. From an urban design perspective, however, the roundabout definitely lowers intelligibility (ease of reading and understanding the urban situation) for people who are unfamiliar with the area.

A Different Solution for Speeding

If you want traffic to slow down, why not try the softer approaches first? Why not educate people about the much more severe consequences of striking a child at a very slow rate of speed versus at 30 miles per hour? Why not talk to people about a more leisurely lifestyle? Why not create popular destinations closer to home, so that less time is needed on the road in the first place? Why not emphasize commercial district revitalization so that it is more fun and more functional to walk to shopping?

Think about making a walkable community, making it easier for developers to propose mixed-use development, and requiring new large developments in your region to follow a new urbanist format.

Incidentally the examples in the paragraph above are instances of the second major approach to traffic calming, which is reducing traffic volume.

Work on helping every household lead a more balanced life, and every individual having less excess aggression that they need to express through their automobile. While your public works department employees weren't trained in anger management, it's really worthwhile to re-think how you're approaching particular problems so that you work on the real root cause.

If all of this fails, take a look at your street hierarchy at the municipal level.  Check to see if you are improperly classifying streets and their function.  Perhaps you can rethink how you are encouraging people to drive in the direction of a major, higher-speed road.  Perhaps instead of channeling everyone toward the same larger road, you want to work on greater connectivity of minor streets so that the traffic is dispersed rather than concentrated.

Install traffic calming measures if you must, but think carefully about the unintended consequences for a neighborhood.