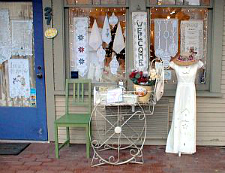 We encourage developing and experimenting with a vibrant downtown ordinance as a way to allow start-ups or outright experiments to take advantage of vacant commercial space .

The essence of such an ordinance, which has no prototype that we know of, is requiring owners of first-floor commercial space downtown to fill that space within a short designated period of time, regardless of whether or not they can obtain fair market rents.

We advocate allowing month-to-month rental and permitting building owners to change tenants as often as they like to set up an actual market for the space among existing business owners, non-profit organizations, neighborhood associations, and entrepreneurs.


Since this is a purely conceptual page, we are giving you some ideas that will have to be tailored both to your individual city's situation and to political and legal realities. Together we invented the vibrant downtown ordinance idea as a solution to the very common problem of too much vacant first floor space.

Obviously we are not advocating anything that your city attorney has not considered carefully and fully approved as legal in your state or within the limits of your city charter. Some states and local governments will decide that property rights give the landlords the right to do anything, including keeping their properties empty. Even in this situation, you might try for pledges of voluntary compliance among the downtown landlords.

You'll need some good existing conditions research before starting your campaign for a vibrant downtown ordinance, but you can do this yourselves. If no staff or staff time is available for the task, ask your planning commission, city council, chamber of commerce, or local students to take on the job of simply inventorying what first-floor spaces are vacant and who owns them.

Although not required, we think you would want to put owners on notice beforehand that the vibrant downtown ordinance is under consideration. Yes, it will tend to mobilize the opposition, but on the other hand, you show you are serious and you mean business. Perhaps even the threat of having to lease space at far below market rent will get landlords to kick into action to upgrade their properties or to lower their rents to a point where there is sufficient demand for space.

There's no need to give a long notice unless you think that's all that will be needed to get owners to lease up their space.

A New Way to Think about Commercial Real Estate

Commercial real estate has its own customs, sometimes supported by state law or at least case law.  But a city that wants to energize a tired downtown or prevent one from deteriorating has to take aggressive action. Because of the custom of building owners constructing leasehold improvements for lessees, commercial building owners are seeking fairly long-term tenants, five to ten years.

Instead, why not follow the example of pop-up businesses and pop-up restaurants happening across the country? Even art galleries are samples of space that change "tenants," if you will, frequently.

So we're asking that you activate your community of talented young people, working especially through any colleges and universities in your town. Try to interest them in setting up micro-businesses in the vacant spaces. They can pool their resources and find some vintage clothing or their childhood memorabilia to sell.

Maybe they can bake cookies or cupcakes. I know, there are many health department rules, and all of them have a good rationale. However, there must be a former restaurant or two that you're trying to fill. Instead of a sit-down situation, we're simply talking about a carryout place.

There's no need that the vibrant downtown ordinance require that the space be used for retail purposes, but retail does generate foot traffic. Yes, this will be hard work, just like all other forms of retail attraction. Non-profit theaters, arts lessons, and field offices of professional services located in the suburbs also are good prospects for tenants.

What cannot be filled otherwise should be given over to artists to decorate, ornament, and animate with something wacky or seriously artistic to attract attention.  While we do not think an arts and economic development strategy is right for every downtown, for some it will be the right formula.

Concert and theatre space obviously would be valuable for evening hour traffic, as well as pop-up night clubs.

Former restaurants can be converted into pop-up restaurants that plan only to be open for a few months, testing out a concept or providing a needed creativity spree for a chef or kitchen crew that has grown tired of the routine and needs a new challenge. Immigrants also can add to the restaurant scene.

One space can be rented out to your city planning department or other governmental units such as the health department that need to do community engagement. Set up a little police sub-station with unique fun activities with young people to attempt to increase trust in police. Numerous non-profits in your community probably would enjoy the downtown location if they could afford it, and the could provide valuable services in the new location.

The library might want a little enclave downtown, or even in a different area of downtown if they already have one space. The library might want to take advantage of the recent trend toward setting up lending equipment, such as 3-D printers, that are space-eating within a traditional library facility but that further and expand the mission and role of a public library.

This could be a good opportunity to try a maker space in your community also, just to see what would come of it.

Elected officials would want to make sure they sweeten the pot in any way possible for the downtown landlords. This could take the form of being extra attentive to needs for sidewalk or street maintenance, different traffic light timing, more frequent street sweeping or garbage collection, or new collaboration with providers to see that downtown has excellent broadband and cell phone service.

All of these are ways that you can demonstrate that a vibrant downtown ordinance can be practical.

List of Key Provisions of a Vibrant Downtown Ordinance

The key provision of what we envision in the first draft of the vibrant downtown ordinance is a requirement that owners of vacant first-floor commercial property rent up the space for as little as a dollar per month on a month-to-month basis within a short period of time. We favor 90 days, which will get the owners' attention and cause a huge outcry of unfairness, but it also will energize the community and cause building owners and potential entrepreneurs to become proactive. Of course the law would have to specify the geographic boundaries and define what counts as first-floor space.

In addition, you would want to:﻿

Why a Lively Downtown Ordinance Is Critical Now

You can't afford to wait for the economy to get better or for market demand to return to some time in the past when people were lining up to pay X dollars per square foot for a long-term lease.

You need to give people hope and inspiration, you need to provide serious entrepreneurship support right now because we don’t know where your country's next big idea is coming from, and you just need to get landlords moving in the direction of doing something with their property instead of letting it sit there deteriorating.

Young people want to live downtown where population density is favorable to dating, chance encounters, and night life. The fascinating community attachment research is telling you that social life is one of the three most important determinant of people’s loyalty to their community.

You need young blood to dream dreams and try the impossible, while they are at a time in their lives when they can afford to do this.

If you could team your vibrant downtown ordinance with a student entrepreneurship program at your local college or university or with a major arts commission, it would be far easier to demonstrate to your fellow decision-makers that this is a viable option.

So city councils of America and the world, we challenge you to enact a vibrant downtown ordinance if you have lots of empty storefronts and then to let us all know what happens.

Even if the results are only temporary in terms of having filled space, you probably will launch at least one good business, have some fun, raise community morale, and get building owners into thinking more creatively about how to rent out space.

We advise finding a team of at least two university interns or two retirees who will volunteer to run this program. It's great for the resume in the case of the interns, and a great opportunity for socializing or polishing up part-time job skills for the retirees. You need someone dedicated full-time, not an already overworked chamber or city employee taking this on as a side project.

We realize this kind of proposal will just raise the roof with protest from most building owners, legitimate long-term businesses who see all competition as bad, and with the commercial real estate industry broadly defined.

We suggest private meetings with the commercial real estate industry prior to launching the attempt to pass a vibrant downtown ordinance, because to them a lively downtown won’t be nearly as important as their commissions and ordinary ways of doing business. Emphasize this is a program only forcing rental for a month at a time, so that if the dream tenant comes along, their deal will turn out just fine.

Your selling points will be it's good for the community, it’s good to get building owners thinking more flexibly about what is and isn’t acceptable, and it may regenerate a market in which they can open vibrant permanent businesses.

Besides, aren't they getting a little bored waiting for magic to happen? Why not enlist their creative juices too in a temporary intervention that may generate real business later on. It sure beats some of the tired marketing methods they’ve been using.

Point out the value of youthful energy and natural affinity for social media. Word-of-mouth buzz is good for everyone, including the real estate community.

True, they might lose some revenue, but if you’ve made the month-to-month deal, most businesses wanting to sign a ten-year lease will wait for a month before moving in, now won’t they? So the real estate brokers will only lose any commission they might have earned for a month, now won’t they?

It’s time for boldness in community economic development in America. We all know that part of the urban sprawl solution is making downtown a magnet again, so investment can be attracted nearby and not on the outer fringes of the urban area.

City elected officials, take some risks and do something to move people toward creativity and innovation. Loosen the rules a bit if you have to.   Don't forget to remove those parking meters, while laying down the law to business owners that their employees can't use the prime parking.

If you want to read a broader article about best practices in downtown redevelopment, please see our page on that topic and also branch out throughout the website using the Search box as needed.