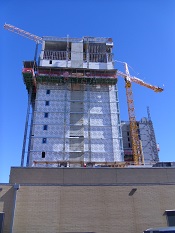 The yimby acronym stands for "Yes, In My Backyard." Usually it's written in all capital letters. Obviously this makes no sense at all unless you have been following its opposite, the NIMBY trend (Not In My Back Yard) that has become so marked in conversations about LULUs (locally undesirable land uses) around the U.S.  OK, we promise not to introduce any more of the silly but descriptive acronyms now in use in the community development field.

We would be the first to say that some neighbor outcries against landfills, problematic nightclubs, poorly designed housing developments, big box stores, fast food drive-through lanes, or asphalt plants are well justified, even though the developers and proponents of these projects would call their opposition NIMBYs (what the people involved are called).

Unfortunately in many places, a NIMBY reaction has extended to anything that would increase housing density, which means number of housing units per acre, and housing affordability.  Single-family homeowners routinely oppose construction of apartments and condominiums, or even two-family dwellings, nearby.

Occasionally this sentiment is quite justified, such as instances in which a particular neighborhood becomes one of the few that a city considers appropriate for higher-density development. (As an example, see both our answer to a site visitor question about too many apartments and group homes and the question itself. Another interesting question asked if townhomes are spot zoning.)


Sometimes the opposition is more subtle, such as when neighbors come out in force to oppose a housing development for vague reasons that all translate to opposition to a lower income group occupying the same neighborhood.

The budding YIMBY movement, if we could call it that, may embrace a wide array of land uses that the YIMBYs would like to support in their neighborhoods. But most people who identify with this label right now zero in on the need for more housing for people of middle and modest incomes. Therefore YIMBYism typically comes into the political conversation where the housing market is brisk and pricey, or where a neighborhood, suburb, or even most of a city faces a threat of gentrification.

Make no mistake about the fact that to the extent that YIMBY is a movement, it is a political movement out to alleviate upward pressure on housing prices, whether that is homeowner or renter housing. You are unlikely to encounter much of a YIMBY presence in the political dialogue of shrinking cities where naturally affordable housing is all too abundant. But where housing has become unaffordable for typical households, the wisdom of abandoning knee-jerk opposition to multi-family housing has become a political issue inspiring new elected officials and aspiring activists to say, "Yes, in my backyard, literally, or down at the end of the block, literally."

In California and elsewhere, accessory dwelling units (ADUS) have been legalized in many or most housing districts, causing beneficial design experimentation in how to add such units either within existing dwellings or often in the back yards of single-family homes. Contrary to the rhetoric of property owners who have been railing against people who live in "apartments," nothing catastrophic has happened to the social fabric as a result of this loosening of zoning restrictions.

Certainly there is no cohesive definition as yet as to what YIMBY really means. We will zero in one topic discussed among the groups in vanguard cities for progressivism that self-style as YIMBY groups.  Our purpose here is not to track the entire trend, but rather to use the concept as a lever for talking about something that really needs to happen quickly in the U.S. if we are to do our part toward alleviating the impacts of centuries of racial inequality and years of ignoring climate change.

That something is an increase in housing density in strategic urban core or transit-adjacent locations, or in neighborhoods with generously sized back yards.

The photo we chose shows judicious use of densification (a jargon term you will encounter) in the form of building higher-rise housing on a major street where low-rise buildings have predominated up until now. Given proximity to a fixed transit station, many shopping and entertainment options, and a reasonable street grid for driving, the addition of this building to the housing stock might result in lower rents in the immediate area in the long run, depending on where demand and supply meet.

But there are other advantages, as we will see.

Advantages and Disadvantages of Urban Densification

On the advantages side, we see several:

That list may be short, but it is mighty.

Looking at the Future of the Yimby Trend

If you want to keep track of who is championing the "yes in my back yard" notion, please take a look at the yimbytown website.  On that site you will also grasp many other aspects of this trend that we have not described on this page. Watch for their next YIMBYtown conference.  These conferences have attracted activists from growing U.S., Canadian, and British cities. Indeed if you want to understand more about the YIMBY perspective, read the astute account of the 2022 YIMBYtown gathering, in which the author compares and contracts the tone and participants in the annual gathering with the new urbanism movement.

Earlier we were concerned that the wide range of issues covered under this loose idea could be its doom. Now we agree with the author of the above linked article that many perspectives, such as urbanism and the importance of climate change for instance, now are taken as articles of faith by most YIMBY proponents, while housing cost and equity are the issues at the forefront.

Natural allies for the housing densification we have discussed include people and organizations in the smart growth movement, some urban planners, sprawl activists, and low-income housing and other social equity proponents. However, the concept is attractive to thoughtful conservatives also, who correctly understand that more compact development and living patterns will result in lower public infrastructure costs for both construction and maintenance.

The headwinds are strong also.  They include unspoken but very real prejudices against people who are "other," and in the U.S. at least, the fierce determination to own a large private lot.  The coalition of progressives and conservatives that we have hinted at obviously would not occur without some serious conversations about working together to increase housing density, agreeing to put aside other policy disagreements and style differences. But with persistence, people of good will could create such a coalition.