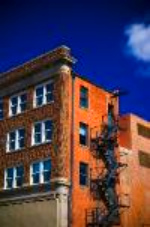 Zoning regulations sit comfortably in the background until it becomes personally relevant to your life. But when a conflict comes up in your neighborhood that makes you take notice, you're trying to learn everything about the rationale, language, and customs of zoning in a crash course.

Our purpose is to help you know what you're going to see when you start to read the zoning code, law, or ordinance (all mean the same thing in this context) for your town or city.

• A map is incorporated, in which each land parcel in town is assigned to a zoning district usually described in letters and numbers (such as R2), with a word description accompanying that shorthand way of talking about the district.

The words might be "Residential-Two Family," for example. In this case, there could be many R2 districts scattered all over town, so don't let the word "district" confuse you into thinking the R2 districts have to be contiguous. Of course the map may be changed, but the change is as complex as modifying any other law. When this happens, it's called a rezoning.

Districts may be of any size and shape, unless limited by your local law. The International Zoning Code, one of those standardized model codes that towns can adopt by ordinance if they choose, allows cities to plug in a minimum district size.

It's also possible that a single parcel, especially a large one, may be part of two zoning districts. For example, sometimes that happens when road frontage is zoned differently from parts of a large tract that may be further from the road.


• We discuss the zoning regulations on the remainder of this page. They describe what uses are permitted in each zoning district and then a set of requirements for the physical layout of buildings, parking, sign regulation, or other physical structures and elements on the land.

By the way, to understand the jargon, you should associate the word "permitted" in the previous and following paragraphs with the word "allowed." Permitted in this context does not mean that you automatically will receive a building permit or any other required permit not covered in the zoning ordinance. In other words, the zoning ordinance typically allows certain land uses, but does not relieve the property owner of the responsibility for complying with other types of codes.

So as we were saying, land uses (really often uses of the building more than the land) may be permitted "as of right," meaning automatically, or as "conditional" or "special" uses.

Being strict about definitions (many municipalities are not), zoning regulations should say that a conditional use requires its recipient to conform to a list of conditions that must be met at all times for the use to be permitted.

A special use in many states and systems merely means that the use may or may not be granted, at the discretion of the governing body. You may encounter various mixtures of the two zoning terms also.

Often district rules include a list of prohibited uses as well. Typically the requirements are rigid and numerical, although in the last 30 years, flexible regulations based on what is known as performance standards have been written into some zoning codes.

Other places are adopting for all or part of their territory a form-based code, which govern things such as building mass, setbacks from the street, and so forth, while largely ignoring traditional land use.

How Zoning Regulations Came to Be

Zoning is a concept that originated in the United States in the 1920s. The practice grew rapidly after the U.S. Department of Commerce distributed a model zoning ordinance. This history is why even today, you often can find similar language in the zoning laws of different cities. Counties and townships also sometimes have the power to zone.

Municipal zoning law has been upheld by the Supreme Court since a few years after the first zoning ordinance was enacted, as part of the general "police power" that state governments may transfer to lower levels of government.

The Supreme Court case upholding zoning and its traditional segregation of land uses was Village of Euclid v. Ambler Realty Company. As a piece of trivia, this is why you sometimes hear the phrase Euclidean zoning. It's nothing about geometry.

Someone asked the obvious question in our community development questions section: why is zoning important?

Typically these laws are justified on the grounds that they protect the health, safety, and welfare of the public, which is the wording that the judiciary first applied to zoning, by the way. Keep in mind that the original zoning regulations were aimed at bringing some sunlight and air circulation to crowded tenements in New York, and you begin to see the logic of the health and safety argument.

Organization of a Typical Zoning Ordinance

If there is a typical organization of a zoning ordinance, it would begin with a preamble about the purposes of the ordinance that would situate it squarely within the parameters set up by state law. Also in a well-run government structure, the introduction will incorporate general or specific language about how the zoning ordinance is in accordance with a comprehensive plan.  Often this overview is followed by a long zoning code definitions section and then a list of zoning districts.

The procedures for changing either the zoning district assigned to a particular parcel of land (a rezoning or zoning amendment) or the general regulations applying to one or more zoning districts are grouped together, often toward the beginning or end of the ordinance.

Next come the zoning regulations applying to each district. Typically these would begin with a rationale or descriptive overview of the district, and then proceed to a detailed list of permitted and prohibited uses, a list of required minimum setbacks from property lines for each side of the yard (if any), a maximum height and percentage of the lot that can be covered with buildings, and perhaps required or prohibited lawns, signs, parking spaces, and accessory buildings (such as your detached garage or storage shed).

Each item in the list of permitted or prohibited uses may be subject to quite a lengthy set of qualifiers also. This may be particularly true of industrial land uses, where specific processes, noise levels, and other criteria may be spelled out.

The ordinance also will include a description of what, if anything, happens to "nonconforming uses" (land uses or buildings that existed before the ordinance was adopted and now do not conform to the zoning regulations).

Also described will be a procedure for obtaining a variance if the literal interpretation of the ordinance would impose a unique hardship on a particular parcel of land.

In recent years many locations have been experimenting with this typical organization of the code, either simplifying it greatly through adopting a so-called form-based code or expanding it with a plethora of flexible districts such as Planned Unit Developments. Sometimes a variety of environmental regulations have found their way into the zoning ordinance, but on the other hand, sometimes the zoning ordinance is collapsed into what might be called a unified development code.

Parking is a good example of recent attempts to make zoning regulations more responsive to broader planning concerns.  For instance, parking requirements were stated in terms of minimums until recently.  Now environmental and other concerns about large and mostly empty vacant parking lots have led to more flexible standards, permitting of "shared parking" arrangements between adjoining neighbors when their hours are different, and allowing proposals based on actual business conditions.

Other more recent innovations in zoning such as overlay districts, transfer of development rights, and even impact fees sometimes find their way into zoning regulations.

By now you may be curious about your particular town's ordinance. Many municipalities have posted their zoning regulations on their website, hoping to reduce the number of telephone conversations. You might be surprised how long and convoluted your code is, but probably you can scan through it online.  If not, you would have to make the trek to city hall or county or township building. Some of you might find that your municipality doesn't use zoning, and a small sub-set of those folks might learn that their county or township exercises zoning authority over their property.

In a word, yes, zoning is legal. If you do not like a zoning outcome, you need an attorney. Beyond the city council, town hall meeting, town board, or whatever it may be called where you live, there is really no recourse except to a court.

If you want to argue that the whole idea of zoning is illegal and un-American, forget it. Your side lost about 90 years ago.

Your best bet if you want to reverse a zoning map amendment or zoning regulation amendment, and you're willing to fight it in court, is to look for a procedural mistake that the government made. It's pretty easy to make an error in the complex process, so you might be lucky.

Of course, if you win on a procedural mistake, the government will only enact the same thing again, this time doing it right. But you might finish your project in the meantime.

If you think a bad zoning decision was made, you can also argue that the city council involved didn't pay enough to the relationship between land use and zoning.

Another way to win in court is to show that the government did a spot zoning, isolating one parcel of land instead of considering a bigger picture.

With a very good attorney, you might try the contract zoning argument, which is in brief that there was some sort of favor or tit-for-tat arrangement for an individual involved.

Another way to win against a government is when you have a very important constitutional guarantee, such as freedom of religion, on your side. See church zoning for relevant discussion.

If the government shows that a regulation is "reasonably related" to a public purpose, they're going to win.

Conservative courts seem to be more and more sympathetic with a property owner when a government's regulations are so complete in their impact as to constitute a "taking" of the property.

The takings clause of the Fifth Amendment to the U.S. Constitution prohibits taking of private property without compensation. So when the impact of a zoning regulation on your property effectively prohibits you from doing anything profitable with your land, you might have a case.

Local governments, be careful about your actions.

How to Oppose a Rezoning