Court Monitoring Can Expand Neighborhood Influence and Sense of Control 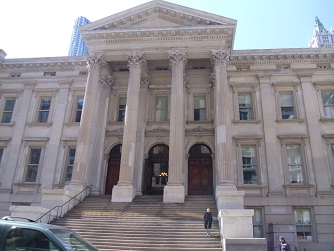 Some neighborhoods have turned to court monitoring in an effort to hold judges and the justice system in general accountable for their actions, to better understand crime in their neighborhoods, to inform sentencing decisions, and to support victims and witnesses as they testify.

We want to say at the outset that we think it is important for neighborhoods to avoid excess emphasis on crime and criminality, to the exclusion of other important physical and social trends in their neighborhoods, some of which even contribute to crime when ignored.  But on the other hand, in many distressed neighborhoods and just urban neighborhoods in general, it is folly to ignore crime, its impact on visitors and potential homebuyers and investors, and the long-term stress factor of dealing with the reality of crime.

So we don't want to encourage you to be a vigilante, but also we need to support techniques that show promise of reducing repeat offenses against your neighborhood. Usually it takes only a few bad actors who return to the neighborhood over and over again to give your community a bad reputation and cause you yourselves to become overly constrained by your fear.

How Court Monitoring Is Being Utilized in Some Example Cities

To oversimplify a bit for the sake of an article of reasonable length, we see three basic court monitoring approaches that courts and communities have devised together:

A program in Hennepin County, where Minneapolis and St. Paul are located, definitely identifies chronic defenders by name and monitors them all the time, including their housing situation.  Each area determines its own criteria for what types of offenders to monitor. The program is volunteer driven, and meetings of program participants are open to the public.  This program features community impact statements that are presented to a court at key times such as sentencing.

Milwaukee’s court monitoring program is used primarily for drugs and weapons cases. It is a notification program, aimed at enabling neighborhood residents to attend hearings. This program also allows residents to prepare a community impact statement.

We especially like this one for people caught selling drugs who are most likely low-level dealers. It's heartbreaking to have to answer questions such as the one on this site, which asked what to do about people selling drugs in the neighborhood. These people richly deserve to have to face how much harm and pain they are causing.

In St. Louis the court monitoring program is a tool as part of what they call a neighborhood ownership model.  A key component is training neighborhood volunteers to submit neighborhood impact statements that are taken into consideration both in bond hearings and at sentencing. Neighborhood folks are specifically instructed not to tell the judge what to do, but rather to stick to describing the impact of the crime. Impacts reported range from vandalism, depressed business activity, and excessive pedestrian or vehicular traffic from drug dealing. In St. Louis as elsewhere, volunteers attend entire hearings and other court proceedings, wearing their neighborhood T-shirts to make a visual impression on the judge.

Again, our fear about this approach is that it would easy to become too punitive in that chronic offenders might find it unduly difficult to overcome their reputations and prior convictions. However, much neighborhood skepticism about whether a repeat offender has really changed appears quite warranted.

As noted above, sometimes the court monitoring programs are more neutral in tone and take the stance that their program does not necessarily give neighborhoods a greater say in sentencing or disposition of cases.

For example, the Cleveland court watch raises awareness among citizens about how the courts are operating so that they can be effective in advocating about criminal justice system issues where warranted. While this is a valuable civic service in a democracy, it is not the same thrust as presenting neighborhood impact statements.

Also falling loosely into this more neutral category is the citizens court watch program in Atlanta, with the city of Atlanta and Fulton County running parallel programs. We cannot find current information on the status of this initiative, so it may have been discontinued or on hiatus during the pandemic. In the recent past citizens received training on court procedures, and then were able to monitor and attend hearings involving repeat offenders and offenses of particular interest to neighborhoods.

We view the Yolo County, California, District Attorney's neighborhood court system as very much a swift restorative justice approach for low-level crimes, as well as an attempt to divert low-level crimes from the regular court system. Yolo County is part of the Sacramento metropolitan area. The County features a facilitated face to face meeting (conference) among the offender, victim if any, and neighborhood folks. There is an attempt to discuss with the offender how to make things whole again, including a community emphasis. Community harm done is discussed in addition to the individual harm done. Desired outcomes are to restore victim including providing money damages where appropriate, restore the community, spare the offender a criminal conviction, and educate the offender about why he or she may have committed these actions. For instance, the impacts of alcohol or drug use on judgment might be discussed.

The San Francisco District Attorney’s neighborhood courts program expanded and revised their community courts program to have a case heard within a couple of weeks—much faster than under the old system. Here the District Attorney's office may assign a misdemeanor case to the neighborhood court (although an alleged offender can choose to go through criminal court system), and volunteer resident adjudicators form a panel to hear the case. These volunteers have been trained in restorative justice and problem solving. They have 10 different locations across the city.

In another wrinkle on court monitoring, another goal is to have the community that was affected drive the solution or punishment so that the community is made whole as nearly as possible.   It aims to reduce recidivism by keeping low-level offenders out of the traditional court system, thereby preventing them from having a record that further damages their life chances. As in other court monitoring programs, the idea is to help perpetrators understand the impact that their actions have on the community.   Community service and restitution are among the remedies that may be ordered.

Note that if you are interested in seeing a court monitoring program in your city, your first step probably should be talking with your district attorney, or whatever the comparable official may be called in your state or nation. If that office is supportive, it can be incredibly helpful. The public prosecutor might even make such a program an initiative of his or her office, but if not, you want the greatest cooperation and access possible.

If that person is not impressed with your idea, seek judges, prominent attorneys, or other respected leaders within the legal system as potential advocates for your ideas. In most communities, the judiciary operates quite independently of the elected city government, so in this instance, talking to the mayor may not be effective at all. Find a champion closer to the courts.