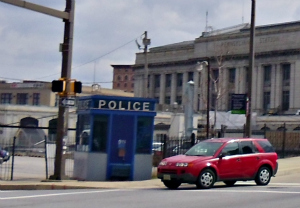 We need to approach crime prevention in smart, effective ways. Fear of crime grips Americans and many other cultures. Fear is anti-social and anti-neighborhood because it makes us distrustful of one another.

Many municipalities seem to spend money on reacting to sensational events rather than on basic crime prevention. While all good measures in themselves, to a community development person, surveillance cameras, neighborhood watch, better street lighting, private security, and hiring ever more police fall short of addressing the root causes of illegal behavior.

An effective program combines not only expedient measures that shift crime from one location to the next, but also sophisticated strategies to address social, economic, justice system, and mental health issues that provide fertile ground for life patterns of unlawful actions.

The grid below shows the pages within this section of the website.  The article resumes after the grid. If you are uncertain what to choose, use the site search box at the top or bottom of the page.

Topics in This Section:

While our entire website is devoted to educating and empowering residents who typically work on a local scale, we should not ignore completely the fact that education may have a higher impact on lower crime rates than any other public policy. We will not dig into this, but we do recommend this academic thesis summarizing the literature and discussing research on education as the key to crime reduction. This paper also discusses briefly the impact of youth unemployment on crime in countries with both developed and developing economies. If you are active in schools, universities, economic development, or youth programs in your community, concentrate on these extremely important relationships.

But for most of you, we want to call attention to nine basic approaches to neighborhood-level crime prevention, all of which your community, and probably your local government on your behalf, should be using. We will detail those critical ideas next. We start with a couple of concepts often considered part of what is called CPTED (an acronym for Crime Prevention Through Environmental Design).

• Increasing the likely number of "eyes on the street" means both there is human activity on the street and humans are alertly watching the street. This is implemented in particular by instituting a neighborhood watch program. Also take to heart all the useful-community-development.org recommendations in general for building a vibrant community, because when people want to be out and about in your neighborhood, it’s tougher to get by with mischief.

• "Hardening the target" means making it harder to break into a door, basement window, or sliding glass door, for instance.

Your group might be able to partner with local businesses for installation of bars over windows or some other crime prevention feature.

• Making it harder to escape notice and surveillance is also effective. Street lighting,  neighborhood video camera deployment, and "smart city" sensors including gunshot detection  are remedies that community associations often support. Such measures simply solidify the "eyes on the street" notion. One caution is that especially the cameras often encounter considerable resistance from otherwise positive people in the neighborhood due to privacy concerns.

• Providing assertive community mental health would also be very helpful. This term refers to providing help for those who suffer from schizophrenia and bipolar disorders, paying attention to domestic violence that may spill over into the street, and caring and intervening when someone exhibits unbalance or long-standing malice against someone or something.

In a similar vein, the proven effectiveness of community anti-drug coalitions deserves your serious attention if you want to prevent crimes of desperation that sometimes ensue in the throes of addiction. Law enforcement officials often become major players in these coalitions.

• Encourage police to become less rigidly focused on law enforcement and to help resolve community issues by using the community policing approach that is practiced at least to some degree by most municipal police departments in the U.S.

• We also think that improving police-community relationships in general will pay dividends in most communities, and especially where the population skews toward young people and minorities. We've included a page of discussion on improving trust in police for your consideration. This topic is especially timely in light of discussion in the U.S. of defunding the police, which seems to mean everything from literally doing away with the police department to reducing police funding to enhance other social programs.

• Promote what we call community pro-social values. It is astounding to me that people could care more about making an anti-authority statement than they care about putting criminals behind bars by serving as witnesses.

I know, people think it can be dangerous to be a snitch, and many older adults and others are afraid of retaliation, but it just doesn't seem worthwhile to build a society that does not value human life. Evidence shows that community policing at least increases the likelihood that crimes will be reported, which is important in getting criminals off the streets.

Maybe your neighborhood leadership could work with local prosecutors on training residents to feel more comfortable with the court system, and therefore possibly more willing to testify if the occasion arises. In fact, check out how some such court monitoring partnerships around the U.S. are helping with crime prevention through making judges aware of the neighborhood impacts, not simply victim impacts, of crime. Their approaches range from a "tough on crime" stance to a restorative justice approach in which the offender is encouraged to make the victim and the community whole again. Some are purely informational. Take a look.

Incidentally, investigate whether your courts are part of the problem.  Certain judges may be more lenient with repeat offenders than the community thinks is warranted.   In many places, it is tough to get rid of a bad judge, but social and political pressure might help and could not hurt.

• Substance abuse programs, ideally emphasizing prevention and treatment, are critical. If you have a big problem in this area, you might need to imitate the federal Weed and Seed program, which has now been killed.

You can still copy the approach, and for that reason we have left the page intact, modifying it slightly to fit the new circumstances.

Neighborhoods frequently must deal with the "drug house" problem or with dealers loitering on street corners. Mind-altering substances of every type, certainly including alcohol, have to be addressed in a meaningful crime prevention program.

Knowing and being known, and feeling part of the community, are drug prevention techniques that also benefit everything else you're trying to accomplish.

• Clean-up programs help produce an orderly environment that people tend to respect. Let's start with parks, because petty crime often occurs the public realm, particularly on streets and in parks. Safe parks are a subject unto themselves. Making your local neighborhood scrap of green space feel and be safe is key to its becoming a major amenity for you.

Depending on the situation the clean-up of private or public property may help, because of better "eyes on the street," fewer vacant properties where crime can occur, or because a clean-up rekindles neighborhood pride. As a side note, if you have a considerable number of vacant properties you may want to look into vacant property registration used as an incentive to landowners to clean up, develop, or sell their land holding.

On this site we're giving you a place to send your photos and brief descriptions of successful clean-ups for others to see. Please share your success!  Let's see your post-maintenance party at derelict property, a park, or an alley.

• Do what you can to reduce the number of guns in the community, especially when they belong to people who are unstable or immature. De-escalate conflicts when you can, and train police to do this as well. If you resonate with this idea, you may be interested in our answer when a site visitor asked if gun buy-backs are a good program for crime prevention.

While there are many resources for neighborhoods or cities seeking crime reduction, we especially like the LISC Community Safety Initiative resources online.  If you need more depth, we recommend this site.

In some situations an easy disincentive for crime is lowering the speed limit. This is true only on your local streets, unfortunately, as traffic engineers seem to think that they made those major roads to handle a lot of traffic fast, and they are going to defend that idea fiercely.

Some neighborhoods have embraced what is now called traffic calming. Our opinion is that this is more relevant to the possibility of reducing burglaries by making the get-away tougher.

This term just means slowing the traffic, through measures such as speed bumps, narrowing streets, making it necessary to bob and weave to get through the street, and closing off through streets to make frequent stops necessary.

You either love it or you hate it, but some of you became involved in a community organization just because of traffic calming proposals.

While traffic controls and speed reduction have a minor influence only on crime in most situations, there are other benefits that make it worthwhile to try such measures.

Certainly the practice of making streets more narrow contributes to neighborliness and pro-social behavior. So there are many good reasons for complete streets, "road diets," "skinny streets," or "green streets."

Note that when you call it a road diet, the women who haven't heard of it will giggle!

We've transitioned flood prevention over to the sustainability section, where it's obviously very appropriate.

But there's a tie-in to crime prevention, you know. Flood-prone areas create just enough disorder that only chaotic people or the desperately poor usually want to live there.

And when the flooding has come and gone, looting begins. The same thing applies to areas beset by wildfires, tornadoes, or hurricanes.  Sometimes the looters are simply desperate people seizing an opportunity, but shortly people of less than pro-social motivation come in and help themselves to whatever they find.

To the victims, though, it adds insult to injury, don't you think?