CPTED, an acronym for Crime Prevention Through Environmental Design, approaches crime reduction in urbanized areas through emphasizing that design can decrease both the fear of and incidence of crime.

The thought is that if you deny criminals physical access to opportunities to commit offenses , you will have by definition reduced crime. Those who believe in CPTED want to see crime-discouraging factors as a dominant feature of the design of the external environment.

On this page we'll talk about which aspects of this theory we see as useful take-aways for your neighborhood, based on our experience in the community development and city planning fields. We'll also tell you what we find wrong-headed in this approach. 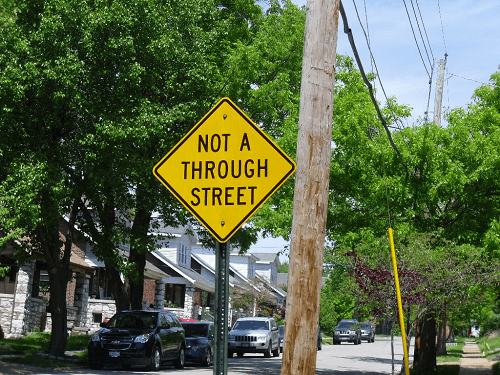 
Note that you also might encounter a different list of strategy areas, one of which will be discussed below.  Several authors and researchers have added their particular slants to the topic, so don't spend too much time fretting about the distinctions..

This theory is quite popular in the United Kingdom and Canada. Urban neighborhoods in the U.S. and Canada also have adopted this approach, including those in several Florida cities (Jacksonville and Fort Lauderdale, for example); Knoxville, Tennessee; Calgary; and Toronto. Several entities offer certification programs, and police departments are frequent customers. So you may encounter these concepts right in your community.

CPTED or environmental crime prevention is an updated and broader version of the concept of defensible space, an idea first used in large public housing projects. It also is related to natural crime prevention and the Safer Cities movement. Sometimes proponents will say that CPTED includes the "broken windows" theory, which posits that any small broken window or piece of graffiti, for instance, must be promptly addressed to let criminals know the space is being tended.

Advocates sometimes claim that environmental crime prevention also encompasses the "eyes on the street" approach, meaning that crime prevention should emphasize more activity in streets, parks, or other problem areas so that there will be more observers of any potential illegal deeds.  We who write for this website clearly believe in increasing the number of "eyes on the street" without reservation, although we do recognize that sometimes this isn't enough.

CPTED emphasizes two elements of space assessment, including designation, which means the clear and unambiguous identification of the purpose of a space, and definition, which pertains to the ability to perceive clearly who owns property and how it is intended to be used. As an example, a grassy lot between two buildings will have good definition if the passerby can accurately predict whether it belongs to the public space, to the business to its right or to its left, or to someone else entirely. In our opinion, it's that "someone else entirely" category that may increase vulnerability to crime.

We might be in the minority of community development practitioners here, but we actually think that public space can attract crime if its purpose is unclear, if neighbors don't take an interest in it, or if the public space belongs to a government where police are too overwhelmed to worry about antisocial activity in a park or vacant lot.

Those who follow this theory believe that humans can be just as territorial as other animals. This philosophy divides spaces into public, semi-private, and private. Semi-private spaces are those that are physically accessible from a public space, but somehow psychologically separated. An example is a courtyard. Proponents favor as much semi-protected, semi-private space as possible, as long as this semi-private space does not offer a place to hide.

Thus those who advocate for environmental crime prevention are quite fond of cul-de-sacs and controlled access in any form, and conversely they are critical of the grid street system that allows "through" traffic.  We notice a tendency to think residential areas are "private," even though most residential streets are public streets. Reading through articles written in the Crime Prevention Through Environmental Design vein, we have seen references to blocking off "public" commercial area parking from presumably private residential areas, for instance.

Proponents also tend to believe in surveillance in any form possible. So neighborhood watch and lots of windows overlooking public and semi-private spaces are favorites. In an office building, they believe that work stations should face the windows. They also like the use of human security personnel where feasible.

If a space cannot be watched otherwise, CPTED folks we have met will favor security cameras and other such approaches.

Where We Agree and Disagree With Crime Prevention Through Environmental Design

We agree with CPTED in the contention that creating a "no man's land" with huge convention centers, hotel blocks, massive bank buildings, or even city center department stores can create space that feels as if no one owns it and no one considers it his or her territory. This may well lead  criminals to think that no one will take the responsibility for reporting what they observe. This is especially true if the number of entrances to large buildings is limited, and if the number and placement of entrances is not calculated to enhance the sense that the space is "owned" by particular human beings likely to appear at any moment.

(If interested in this, you can check out more commentary on the impact of large buildings on our page about office tower buildings.)

We believe that large surface parking lots using meters or various payment machines similarly do not seem to belong to anyone. If your neighborhood has one or several of these, do what you can to make each lot seem "owned" and cared for.

CPTED favors careful design of landscapes so that they do not afford hiding places. They want shrubbery trimmed to a maximum height of three feet, low thorny bushes below windows,  and  tree branches trimmed to come no closer than about six feet to the ground. This movement also sometimes advocates for shopping centers, theaters, and businesses to close off unneeded parking areas at off-peak times of day so that criminals have less access.

While CPTED oriented programs and practitioners claim to support anything that develops pride of ownership in a neighborhood, some of the practices seem to us less likely, rather than more likely, to promote neighborly behavior. For instance, as we said, cul-de-sacs are supported, and grids are criticized. Proponents of the approach will point out that corner homes have a higher instance of burglary than mid-block homes, for instance.

Here is where we part ways briefly with CPTED.  We think that street grids provide multiple routes through a neighborhood to increase walking, bicycling, and random appearance of vehicles greatly. People in transit provide an unpredictable pattern of "eyes on the street."  At the same time we think that cul-de-sacs lead to dead space, and that once a criminal has verified that no one is at home or that landscaping obscures the view of anyone present, committing a crime there is certainly as easy as a residential burglary on a street within a grid.

We mentioned that there are other lists of Crime Prevention Through Environmental Design strategies. We'll use one in this section to give you a few more pointers about helpful techniques. We organize this by strategy names sometimes used:

We heartily agree with thee last two points and recommend that your neighborhood take a serious look at quality code enforcement, frequent vibrant events to bring in visitors and help neighbors get acquainted, and lively commercial areas if you are serious about fighting crime.

We already mentioned one of our biggest objections, which is the short-sighted  insistence that cul-de-sacs are better than street grids. We wouldn't deny crime statistics on this matter, but we think that with the rapid increase in walking and bicycling recently, any cul-de-sac and large lot subdivision advantage will disappear, at least for daytime crime.  From a community development perspective,  cul-de-sac communities are not nearly as adaptable and durable over the long term as street grid communities, which can reinvent themselves over and over again. Cul-de-sacs may promote knowing one's immediate neighbors, but certainly the opportunity to meet people who live on adjacent cul-de-sacs is quite limited. So if you believe in the neighborhood watch approach, involving an entire neighborhood,  cul-de-sacs aren't a good environmental design.

We also have heard it said that short blocks are more permeable for criminals and therefore more likely to support illegal behavior. But short blocks also are much more friendly for safe and convenient walking. We think that increased pedestrian activity is beginning to reverse the research finding that small blocks are more vulnerable to break-ins.

Another example of a good theory gone awry, in our opinion, is the opposition to mixed-use developments. Sometimes we have heard CPTED folks say that mixed-use causes increased vehicular and pedestrian traffic, thus adding to opportunities for crime to occur.  Well, yes, but presumably spreading out the same businesses and residences over a wider area also increases crime opportunities, so we think mixed-use has a considerable advantage over single-use in increasing the likelihood that crimes will be observed.

Similarly, the "designing out crime" people say that density is bad because it creates more crime targets. Well, yes, but those same people are going to live somewhere. Again, density also increases the likelihood that someone saw something useful to law enforcement. It's a nonsense argument, we think.

Another objection we sometimes hear is that environmental design can't address crimes of passion or crimes where the perpetrator is truly driven. We agree with that. CPTED did flirt briefly with the internal psychological environment at one point in its history, but that thread soon disappeared.

We would broaden this latter objection by pointing out that psychosocial and economic issues that lead people into criminal behavior in the first place aren't addressed at all through CPTED.  Yes, we think it's important to reduce opportunity for committing a crime, since we are pretty sure that criminals are just like the rest of us in our habit of procrastination if a behavior is inconvenient.  But on the other hand, environmental crime prevention doesn't do anything to address root causes of bad behavior.

Our final word on the subject is yes, of course pay attention to CPTED, because when it comes to crime prevention, every little bit helps.  Just don't expect it to provide a comprehensive list of what your city needs to do about crime.

It's fine for your community to sensitize police officers to design issues and professional planners to environmental crime prevention, but it's certainly not an exhaustive solution.