Infrastructure Issues Are Backlogged in Many Communities 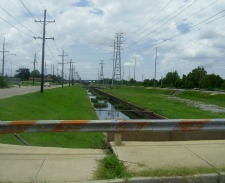 Photo: Highlighting the importance of infrastructure issues, a New Orleans photo shows a drainage canal, levee, transmission line corridor, sidewalk, guard rail, and street within a tight geography.  In time, our dependence on the reliability of infrastructure could be called into question.

Infrastructure issues should be at the center of our public dialogue, but since few people other than engineers are much interested in or aware of all the different components of our infrastructure, that's unlikely to happen.

In case you don't know, infrastructure means roads, bridges, utilities, tunnels, canals, and the other manmade, usually publicly funded, things we use to get around or to share electricity, natural gas, and other utilities. Other people use the term more metaphorically for things like natural elements (so-called green infrastructure), or you may have about social infrastructure as well.

People in the so-called developing nations just really need road and telecommunications infrastructure, such as cell phone towers or telephone lines,  for the first time.  There is no possibility of earning outside money for the community unless one can get word of a new product to the neighboring village and unless there is a way to transport raw materials, agricultural commodities, or products to a seaport or airport.

A few visitors to our site, though, are concerned about aspects of infrastructure in the developed nations. In the U.S. the maintenance and repair of infrastructure has been neglected to our peril.  Somehow it just seems more interesting to build new roads and bridges than to maintain and upgrade the ones we have, and our budget priorities show it.

Only a few of you worry about everything, including how to finance and handle the logistics of replacing all of the aging infrastructure that is in place in the developed nations.  Building new facilities is so much more exciting to the political class.

Sometimes there is a perceived deficiency because particular facilities were not considered important during the era when a suburb was built.  Sidewalks tend not to be present in subdivisions developed in the 1970s and 1980s, for instance.

We tend to place blind faith in our levees and bridges, however. Since the specialized knowledge that goes into their design and construction eludes us, we prefer to see them as invincible.  Of course the highway bridge collapse in Minnesota, as well as other incidents worldwide, means that we cannot remain forever in denial about these important links in the system.

Sidewalks and bicycle lanes, tracks, and boulevards are moving up the priority list as the emphasis on livable places gains more momentum.  A corresponding decrease in faith in highways and large capacity roads is occurring in some city halls and highway departments.

Broadband has become a mainstream technology available to communities or neighborhoods in cities, and it is among the first utilities to be distributed through the air and not on the basis of a linear wire or pipe. You should have questions about the community repercussions of this technology, but we haven't seen any yet.

That brings us to why we're here.  Don't you have a question about infrastructure issues that you have been dying to ask?   In private, if need be?  You can do that by taking advantage of the invitation form below.

Over time we hope there will be an interesting body of questions and answers in this category.  We hope it will blend the concerns of those who never have enjoyed the luxury of a particular type of infrastructure with replacement concerns on the part of those who need to rebuild due to age or to natural disasters.

Have A Question about Sidewalks, Utilities, Roads, Bridges, More?

Would you like to ask the other visitors and/or the editors a question? Here's your place to ask and then watch for answers and comments.

Other Questions and Answers

Click below to see contributions from other visitors, and answers.

Dissolved Village District; What's next? Not rated yet
Our Village District, located in Campton,NH, was recently dissolved by the county. There was no-longer any interest by enough residents to legally operate …

Infrastructure and Subdivisions Not rated yet
Does the infrastructure have to be installed before lots can be sold in a subdivision? Editor's Reply: The answer depends on your state law, but …