Try a Maker Space As a New Economic Development Idea 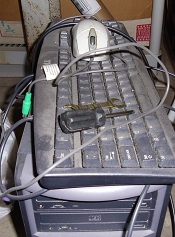 A maker space is best described as a drop-in location and social club whose members are interested in making, fabricating, and manufacturing one-of-a-kind items.   The idea is emerging most strongly in schools, public libraries, and youth services.  Ever community-minded on this site, we write about them because of the potential to engage young people in something productive and fascinating, while building their skill set for digital and technological innovation so they can generate jobs in your community.

A maker space has a physical location, is open during specified hours to its members or constituency, and usually runs on the basis of membership or a similar way of vetting who can use the equipment and who will support the space financially.


A workshop we visited recently was well stocked with equipment, tools, computers, and resource books and designs for making things.   Especially trendy technologies that have not reached the mainstream for home use, such as 3D printing (explained below) and computer-aided digital design, are typical of a maker space.

The overall concept is rather simple. It seems to be a cross between a recreational and possibly educational way to engage youth in productive pastimes and the shared facilities idea, such as a business incubator.  However, we think the importance of the makerspace, sometimes written as one word also, ultimately lies in its potential for local economic development.

The Three-Dimensional Printing Example of the Makerspace Advantage

Examples will help, since most of you lack experience with this kind of physical space or program concept.

Three-dimensional or 3D printing, the term refers to relatively low-cost printers are now being made that will allow a variety of materials to be "printed" in three dimensions.

This means if you have a digital file in the .stl format that someone has supplied to you, or that you learn to write yourself in CAD or SketchUp, you can just push the print button and through repeated passes over the area to be built up in the third dimension, the printer will extrude a prototype, a missing part, or a rare item. The "toner" for these 3D printers may be wood, plastic, textile, or other materials.  Costs of these machines vary right now from around $700 to $50,000 U.S. dollars.

Being able to "print" objects from a digital file has obvious advantages to computer hardware and software folks, designers, architects, and people who just like to tinker.  Conceivably you could print a missing part for your appliance, or with the low-cost end of 3D printers, make your own plastic piece that would fill a gap in your lattice work or your drafty windows.

Inventors who can master the digital design software would be able to try out variations on their design in the real world quite quickly, as opposed to paying a machine shop or other prototype manufacturer thousands of dollars and waiting days or weeks for the item to be produced so it could be tested and improved.

In emphasizing the potential for local economic development, we don't want to overlook the potential for training neighborhood youth and adult who like to invent stuff for larger roles in the world economy. For example, in the not too distant future, 3D printing is likely to find applications such as allowing the printing of food in space, or the printing of limbs or organs for high-end medical applications, especially in remote parts of the world. Learning these skills near home could start a highly productive career in one of these emerging exponential technologies.

Who Are the Likely Participants in the Lab?

Thinking about possible activities in the maker space, it's clear that one audience is young geeky guys who like to fool with their motorcycles or cars.  Computer and video game hobbyists are another obvious audience.

But also, let’s think about people who like to cook, bake, do art, make video, engage in science and mechanical experiments not appreciated by the household, push the limits of photography, and design and create textiles and clothing.

It is a space for people who fiddle with physical objects to trigger one another's creativity and also to cooperate on the acquisition cost of hardware and software that may be beyond the means of an individual.

Usually projects can be stored in the organization's physical headquarters, a significant part of its advantage.  Social activities often are part of the agenda too, and certainly hanging out with others who are "makers" explains some of the appeal of such spaces.

Hospitable hosting organizations include (some) schools, libraries, community centers, adult education providers, and other "third places."   Often quite an impressive array of tools, spare parts, and spare computer hardware and software, as well as chairs, tables, coffeepots, and ping-pong tables, can be assembled by simply appealing to the community for donations.  Members may lend some of their own personal equipment to the cause, considering that they will still have access. Then membership fees and possibly rental fees to others can generate income to allow purchase of more expensive and specialized equipment needed to fill in the gaps.

We’d like to see some coffee shops lease the space next door and start running a desktop manufacturing program.

Sometimes the maker space is able to move to a freestanding environment, which probably is best in terms of encouraging new ways of thinking.  The maker space is another potential adaptive reuse of abandoned factories or other large facilities, right?

Probably the maker space idea is an extension of hackerspace or hacker labs that emerged in the 1990’s on the heels of the personal computer revolution.   Our theory here is that as the hackerspace idea began to demonstrate some validity, adults wanted a more socially acceptable name!  (But note that many of the maker space programs evolving throughout Europe, Asia, and the U.S. have names that seem a little edgy to those of us who are more "settled" and "mature.")

For more about youth-oriented maker space, see the makerspace website.  This site also includes a directory of such facilities, which could serve as a starting place for you if you get serious about this strategy.

Leaving aside educational benefits, we are interested in the economic development merit of bringing creative people together.   The potential exists for not only fostering youth entrepreneurship and a young adult business incubator, but also for business opportunities for adults who are oriented toward things, as opposed to being oriented toward ideas or people.

Keeping adults interested in what is already called the Maker culture (complete with Maker Faires) probably will require both high end equipment and building a sense of play among adults who may be desperate for understanding or gainful employment.

On this website it's no secret that we believe the way forward for U.S. and European economic development lies in innovation, triggering everyone’s inherent creativity, and then having the smarts as a community to figure out how to channel the imagination and knowledge of your local car enthusiast, jam maker, or artisan into something that earns an income for that individual.

Although mechanical and technological interests are sometimes considered to be on the other side of the spectrum from artistic interests, actually we find that if you can position both activities correctly, they can be highly compatible.  Many artists are interested in taking advantage of the possibilities that new technologies offer, and certainly many go through phases of experimenting with many types of construction tools. If you talk with everyone who will listen about how creativity is one human impulse, regardless of the mode of expression at t

A percentage of these individuals will be successful enough in their ventures to move beyond the hobby level into self-employment, and some of these sole proprietors will be able to employ others eventually.

As is typical in the field of community economic development, imitating other communities, at least mentally, is a great way to think through what will work in your own situation.   Maybe your economic development organization should sponsor the maker space. What do you think?