How Important Is Community Policing for Your Neighborhood? 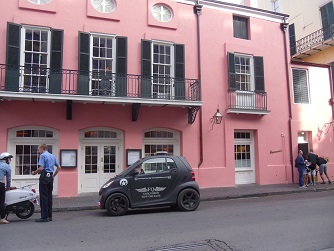 Almost every city in the U.S. is practicing or giving lip service to some form of community policing. The concept encompasses regular geography-based beats and getting police out into the community more so they know residents and understand the culture. In addition, police are expected to be generalists who can help resolve long-standing problems and repeat conflicts to enhance crime prevention.

This stands in opposition to the idea that police are there to enforce the law, but not to deal with prevention. The man who popularized the community policing notion, Robert Trojanowicz, reportedly characterized the approach as expecting police to be social workers with a gun.

We are writing about this because we see that elected officials and police department often try to pacify neighborhoods who are upset about crime by saying that they will institute more community policing. That just sounds good, and we think it actually is good overall, but still, keeping elected officials accountable for actually getting their police to interact in positive and problem-solving ways with the neighborhood is a chore that often requires considerable vigilance.


Note that community policing is in some ways the opposite of the "broken windows" theory of enforcement, in which each tiny infraction is enforced vigorously. We've written about "broken windows" and crime prevention through environmental design (CPTED) elsewhere, if you would like to delve into that more. Taken to extremes, broken windows oriented police departments would arrest first and ask the "why" questions later.

Suffice it to say that experts who lean toward community policing would want officers to be less concerned about small maintenance and cleanliness matters and more inclined to invest effort in developing partnerships with community groups and leaders, team up with others as necessary to address community problems, and adopt discretionary policing based on understanding and appreciating the cultural and socioeconomic environment of the community.

A community policing approach also has often resulted in greater emphasis on school resource officers, participation in and leadership of community anti-drug coalitions and initiatives, and sensitivity to mental health issues. Note that many of these roles for police are now under suspicion as the Black Lives Matter movement has focused our attention on how far police have been stretched. The "defund the police" proponents certainly want to move some of these roles entirely out of a police department.

Under President Clinton, community policing actually became a federal grant program in the U.S. called COPS (Community Oriented Policing Services). You can keep tabs on COPS grant opportunities through their website.  As often happens, the availability of grant funds meant that some communities applied the principles strictly and successfully, while others just took the money while still resisting change. So not everything you see done in the name of community policing actually increases public safety.

Historically at least, U.S. Department of Justice emphasizes these aspects of COPS:

While we're describing COPS, we need to point out that as far as we are concerned, neighborhood policing means exactly the same thing except under a different name. Neighborhood policing most notably is found in New York City but also in some other American cities. A critic of the COPS program, David Couper, started the use of this term to differentiate his recommendations from where he saw the Department of Justice leading, but in reality on the ground, we see no difference.

Another closely related idea that you might hear about is POP, Problem-Oriented Policing. Again the emphasis is on police being able to participate in problem-solving before a conflict situation becomes violent. Referral to resources is often a key strategy for departments or officers who embrace this idea.

We think it's completely obvious that getting police officers out of their cars and into the neighborhood on foot, on a bicycle, or on horseback in large parks will result in a more intimate knowledge of the neighborhood and its characters than staying in the car or writing reports all of the time.

Of course this too can go too far, especially when it becomes combined with the typical paramilitary kind of mindset that you find in many police departments or individual officers. For example, the infamous New York "stop and frisk" policy certainly falls into the mode of trying to solve problems before they lead to crime. It also falls under the community policing model in that officers are on the street and out of their cars and offices.  But it's obvious to us that this policy quickly aggravated the tendency of a number of police to be suspicious of almost everyone almost all of the time, but especially young minorities. And in turn, the young minorities and others who were targeted certainly didn't feel any more inclined to trust in police.

But we think the major problem with community policing actually lies in the inability of most departments to implement it well. This occurs for two reasons: (1) The department is under-funded or under-staffed so that officers are forced to spend time responding to their radios or investigating serious crimes instead of getting to know neighbors and resolving problems, and (2) Many police departments or individual officers have a militaristic and legalistic bent, and may remain overly enthusiastic about being tough on crime. Some are unable to adjust to the understandable public outrage against the excesses exemplified by the killing of George Floyd in Minneapolis, and simply lose their cool and lash out at protesters.

Repeated exposure to bad guys and gals might make any of us jaundiced, but still, quality community policing requires officers to set aside some of their predisposition to think in a linear and rigid fashion. Many times police officers self-select from the most conservative elements of society, and sometimes their experience makes them too eager to detain or arrest, too mistrustful of people, and too unwilling to set aside the police culture they may have learned at the academy or from more experienced officers on the streets.

The rhetoric that community policing experts and enthusiasts repeat often states that this approach requires creative problem solving. However, creativity isn't usually the strongest suit of police officers, we think you would agree. So sometimes police aren't resisting and being obstinate when they don't seem to "get" community policing; it's just that we are expecting them to add behaviors and habits that rely on the right side of the brain.

Another potential problem is that too often, community policing is practiced only within a special unit in a large police department, or that certain commanders and officers participate in community policing while others figure that making arrests and writing tickets is the real police work and that anything else is for sissies.  This makes for a disorienting experience for our neighborhood folks, though, if suddenly their new cop on the beat doesn't want to participate in community events and get to know the neighbors. We think consistency throughout a department makes for a much better community experience.

We think that the community policing model has been a notable failure in helping to work through basic racial equity issues in police practice. Implicit bias still seems to inform many of the decisions about who to question, who to stop, who to doubt, and who needs to be over-subdued or even punished. In the past COPS really has not been oriented toward those discussions, so we will wait and see what happens next.

You've probably seen evidence of a community policing mentality in your neighborhood. You may have seen foot patrols, police men and women attending events at schools to try to make friends with the kids, police sub-stations in little huts at strategic locations or within businesses, police organizing neighborhood watch groups and citizen academies, and police officers reporting on the latest successes and problems as part of the agenda for your neighborhood association. They might bring hot dogs and balloons to your National Night Out party.

So probably you have some exposure to this concept, but what does a successful program look like?

Sarah Lawrence and Bobby McCarthy of the Warren Institute on Law and Social Policy at Berkeley have summarizing the elements that make for a successful program. In our own words, these include commitment on the part of the chief and highest ranking officers in the department,  a very wide variety of community partnerships including relationships with voices not usually heard, making police more visible and available to residents, training all police employees in the principles while improving officer enthusiasm for and understanding of the program, and putting in place some standardized principles for dealing with typical problem situations.

We would like to emphasize that unless the leadership makes time for these activities, many police officers, especially those with the toughest beats, will not find time for getting to know the youth or organizing alley clean-ups. Beat cops need time when they are not responsible for responding to the radio, which means in turn that there are higher staffing needs when a department adopts community policing.

Some departments prefer to add to their staff by having designated community policing officers, who do nothing but deal with recurring and long-term issues and get out and mingle with the community. But there's a problem: this makes the rest of the officers do all law enforcement and none of the stuff that helps them understand the neighborhood better, or for that matter, none of the stuff that would help make the neighbors more likely to view them as helpful human beings that they would be glad to talk to.

But we do think that the results of this approach are worth it for neighborhoods if officers show a real dedication to its tenets. So folks, urge your local government to create a police sub-culture that collaborates broadly with the neighborhood. In many cities and towns, the police department is its own little island in city government and not especially receptive to mild suggestions from the city's elected leaders. Push on your city council to deliberate about and determine general policing policies, including use of force policies, community interaction policies, and power granted to police unions. Then the council will need to be firm in holding the department accountable.