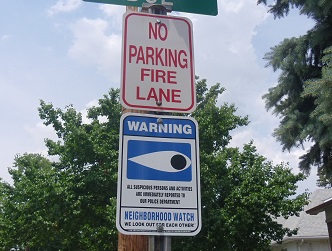 The neighborhood watch anti-crime program has become quite popular, as citizens try to work closely with law enforcement to provide extra "eyes on the street," reporting unusual activity to the police. On this page we will tell you how to cooperate with your local police to form this worthwhile project.

"Eyes on the street" in this instance simply means that people are consciously watching for unusual events on the block.

I'd much rather see these programs, also called crime watch sometimes, than the widespread use of surveillance cameras, which are a substitute, but one without any additional social benefits.

In more socially connected times, we knew our neighbors, their habits, and many of their visitors, so we could have spotted when something unusual was happening.


Now people are less likely to be acquainted with their neighbors. As society is less cohesive, many people don’t want to get involved with neighbors of unknown character.

Moms and dads are usually working now, and there are fewer and fewer front porch gatherings or over the back fence chats.

However, crime is on the radar screen in cities, suburbs, small cities and towns, and rural areas. Law enforcement officials don't have the resources to be everywhere, and if they did, we would probably complain.

So these citizen groups came into being as a way of educating citizens about looking out for the atypical and gathering information when a crime does occur. Often a few burglaries spur the formation of these initiatives. If this fits your situation, you might be interested in our answer to a site visitor question about neighborhood break-ins.

If you want to organize a neighborhood watch program on your block or in your entire neighborhood, your local law enforcement officials probably will be very happy to assist you and provide you with resources.

Deciding on a Neighborhood Watch Program

As a neighborhood leader and participant, there are pluses and minuses to a crime-oriented program on your block. The negatives are that you telegraph to the world that probably you've had a burglary, and that some people may object to the overly aggressive enthusiasm of a police department for this sort of activity. A few people will feel that rather than being crime watchers, you're becoming vigilantes.

A second point to keep in mind is that you may want to structure the neighborhood watch program and modify it a bit from the way your police department or sheriff's office presents it.

In fact, I worked with one community where the neighborhood watch steadily evolved into a more robust neighborhood association; by the time I entered the picture, there were dances for the teens, garden tours, a lilac festival, and an outstanding trunk or treat event for Halloween, none of which had any direct bearing on crime at all.

I shouldn't have been surprised though. Social science researchers have been demonstrating since the late 1990s that interpersonal connections and ability to work together to solve problems are crime prevention strategies in and of themselves, regardless of whether you organize a neighborhood watch group. (Read about the research of Robert Sampson and others are Harvard here, if interested.)

Along these lines, check out our pages on block units that involve only one block, or on how to start a neighborhood association.

How a Neighborhood Watch Works

Neighborhood watch is best conceived of as a cooperative effort between law enforcement and citizens. The data show that this cooperative approach works, especially in reducing crimes such as burglaries or home invasions.

The program itself usually consists of the following elements:

We also find that communities that appreciate the neighborhood watch approach also will thrive on court monitoring for neighborhoods, so check out that page if you want some examples of how to hold judges accountable for sentencing, or work with offenders to help them truly understand and confront the damage done to victims or to the neighborhood.

How to Start a Crime Watch Group

First, check to make sure that you haven't overlooked an existing block club, or what we called a block unit. If there is none, usually you'll want to form a planning committee. If someone on the block recently has been the victim of a burglary, it won't be hard to recruit him/her/them. After you have three or four of you, approach your local law enforcement to see what assistance they offer.

Even if law enforcement is extremely helpful and organized, try not to let your hand off the steering wheel entirely. You should make the first contact with the neighbors yourselves.

Determine what geographic area is to be covered, and invite everyone to a first meeting. Especially in a smaller town give law enforcement plenty of notice. Deliver flyers or letters to each residence advertising the first meeting.

If people don't participate at first, keep trying to get them involved. After all, the success of your group may depend on what that particular uninvolved person sees.

From this point on, running a watch meeting is pretty much like any other meeting, except that the law enforcement personnel attending are likely to be somewhat dominant. Let that happen; they have a lot of expertise and will train you on the do's and don'ts of preventing burglaries.

They will provide lists of what to observe and record when you see a crime or a suspicious activity, and the security of having those lists will help you become a better witness if that day happens.

Usually there will be a watch coordinator, and block captains will be recruited for each block, if you have a neighborhood-wide group. But keep in mind that your particular block by itself can be a watch community as well.

For more detail about starting a neighborhood watch, see this excellent article from StaySafe. Also you may want to visit the community organization section of this website.

You can download a very good free ebook on neighborhood watch.  The link in the previous sentence gives you a download widget in the upper right corner.

Crime watch groups are becoming more sophisticated all the time.  Make sure you are taking full advantage of any programs in your state that allow you to track the whereabouts of convicted sex offenders, the names of people recently released from prison who might be returning to your neighborhood, and the records of judges.   Maintain your humanity though--don't lose compassion while trying to prevent crime.  For instance, it's good to be aware of people who may be returning to your neighborhood after a stay in prison, but be as ready to lend a helping hand as a suspicious eye.

The Long-Term Approach to Fighting Crime: Place Making and Lifting Families Out of Poverty

Also, remember that you need to make your neighborhood wonderful in general, and that the activity level in a terrific place to be is often enough to deter crime. We recommend a well-rounded book on neighborhoods in general that sheds light on deterring crime: The Great Neighborhood Book: A Do-It-Yourself Guide to Placemaking.

In fact, some research suggests that a focus on improving police response may be better than neighborhood watch. Other effective evidence-backed techniques include community policing and landlords sharing information about trouble-making tenants.

Check out the rest of the site for many additional thoughts on how you can build a low-crime neighborhood.   Addressing economic development and community mental health are key pieces of the puzzle.

Learn More in Our Related Articles