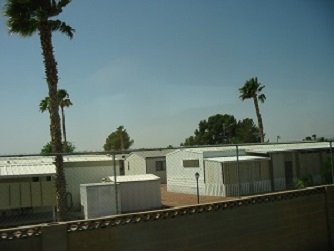 Manufactured housing is simply a housing unit that is built entirely in a factory. Formerly known as mobile homes, the newer term officially replaced this older one in June, 1976, when the so-called HUD Code went into effect in the U.S. Yes, many of our relatives still talk about trailers and trailer parks, and lament their rundown appearance on rural roads.

HUD stands for the U.S. Department of Housing and Urban Development. The HUD Code is tailored specifically to manufactured homes and considers wind and other hazards and conditions in various parts of the nation. Since 1976, this national code that raised quality standards considerably. A manufactured home built after 1976 often bears little resemblance to the pre-1976 product.

Theoretically, the HUD Code supersedes all state and local codes, so that manufactured homes are legal anywhere that conventionally constructed stick-built single-family homes are allowed. However, zoning boards and administrators have become exceedingly clever at inserting requirements that the factory-built unit cannot meet.

For example, if the minimum width of a home is 25 feet, that will exclude the double-wide and certainly the older single-wide mobile home. Sometimes basements are required, and other requirements difficult to meet through factory-supplied homes may be imposed.

Typically both developers and citizens simply give in to local zoning authority because all of the savings that could be realized through purchasing a factory-built unit would be given up in the legal battle against local zoning.

By the way, a modular home is simply a sub-category of the factory-built unit. Large pieces of the home are shipped separately and assembled on site.

According to the Harvard Joint Center for Housing Studies, 5.6 percent of all U.S. occupied homes in 2017 were manufactured.  Outside of metropolitan areas, that percentage rises of 14.3.  There is considerable variation between metro areas in the prevalence of manufactured homes.

Overall the American South showed a higher percentage of housing in the form of manufactured units than did other regions.

However, despite more and more families paying more than 30 percent of their income for housing, only 93,000 manufactured units were shipped in 2017, compared to an average of 291,000 annually in the 1990s, according to the same Harvard study.  The significance of the 30 percent figure is that the U.S. has long considered that anything more than 30 percent for housing is when a household has a housing affordability problem.

All of this leads us to conclude that manufactured homes are losing some of their consumer appeal, since more and more households seem willing to pinch pennies on other budget categories in order to spend more on housing.

The major advantage of manufactured housing is its affordability.  The cost of a manufactured unit may be only a fourth as much as a comparable unit of conventionally built housing.

Affordability does not necessarily mean that the building materials are inferior, although they may be. Major factors in keeping costs relatively low are controlled conditions within a factory so that the weather, theft, and vandalism issues that are commonplace on conventional stick-built housing sites are all negated within a factory setting.

In addition, the economies of standardization of materials apply, as well as the specialized expertise in constructing a particular rather limited set of designs.

Until we have a substitute system that produces more durable and architecturally appealing affordable housing, those of us who care about low-income or even moderate-income housing should be judicious in our criticism of the industry and its product.

However, we should note that manufacturing housing is not as effective at building wealth as housing built on-site. While research shows that manufactured housing is holding its value in a way not thought possible a couple of generations ago, its appreciation over time is pretty limited. So from the standpoint of reducing racial and ethnic disparities in generational wealth, other solutions for providing housing affordability will be better.

Recently the most rapid innovations in manufactured housing have been in the area of architectural detail. Notably, ceiling heights also can now be as much as 9 feet, and hip roofs are easily accomplished. A collapsible roof technology that allows the manufactured home to pass under highway overpasses has allowed almost any pitch to be practical.

In the twenty-first century, the two-story unit also has become feasible through changes in the plants. This new feature could change manufactured homes dramatically.   Industry associations have sponsored experiments in urban and suburban settings to learn more about how their product can fit into existing neighborhoods more satisfactorily.

Then we all know there are still a few true mobile homes, built before 1976, sitting around in the countryside and perhaps even on older arterial roads in what now are thoroughly urban neighborhoods. The rusting ones with the dilapidated porches falling off are in our consciousness when we cringe at the notion of mobile homes.

You may be able to address some problems with older mobile homes through the existing property maintenance code. Also other code violations often occur at mobile home sites that are truly an eyesore, so you might begin with insisting on the abatement (correction) of those violations.

Some Alternatives to Factory-Built Housing

If you are in a small town and you really want to clean up your image problem and enhance small town character, you will have to sponsor alternative affordable housing, and then offer incentives for people to move. In rural neighborhoods, the situation is the same really.

One alternative may be to try to round up all the old mobile homes into one park, fence it, and then landscape the perimeter thoroughly and attractively. People who have been living on acreage are going to resist fiercely though. This approach usually does not succeed.

Our recommended alternative is encouraging, planning for, and incentivizing local builders to find land suitable for quality lower-cost housing. Help them locate appropriate properties, and provide some assistance with finding alternative conventionally built house plans that will meet the goal. While this program does not provide instant relief, and often stretches over several years, eventually you will improve your housing stock.

Another possible town or village program would involve financing help for people who want to upgrade to a newer manufactured home. If you can find ways to scatter these throughout your town without creating a problem for nearby property owners, that is an approach that may have merit in particular situations. At least avoid large concentrations of new manufactured units; maybe five on one parcel of land will be acceptable. You don't want all of these units to start looking rundown at about the same time.

Even the best-looking of the older mobile homes create a negative impression in most people's minds if they are on the main road entering a small town, or even in a resort community.

So for the sake of economic development, you may want to inventory the existing stock of individual units and parks, and do a feasibility study of what would be required to replace or even relocate any units that are causing a negative impression of your community.  A manufactured home set-up company can move any units that are still in good condition.

The main industry trade association's website gives additional information, although of course it will be slanted in the direction of supporting their product. States also have industry associations and may be more immediately available to answer your questions.

You'll have to wrestle with the affordability issue and also the legal questions if you decide you want to exclude all manufactured housing. So make sure that your sense of community values tells you that there's no manufactured housing that will blend satisfactorily with your neighborhoods before you allow your out-of-date stereotypes to control your approach to regulating factory-built housing units.