A Property Maintenance Code Is Good for Your Town

A property maintenance code deals with the condition of existing housing and non-residential property, including commercial or industrial land uses. Local communities adopt these codes as municipal or county ordinances.

Any type of code adoption and enforcement can be controversial in communities, but usually blanket opposition comes only among people who lean libertarian or who definitely don't want to comply for some reason. Many other residents will be silent supporters, and some of them will publicly side with one of our site visitors who wrote a question about fewer homeowners and tenants keeping up their homes. See our answer at that link.

I've been responsible for code enforcement, which means that the actual inspectors reported to me. It also means dealing with angry people who think I'm just making up the rules as I go along, which is definitely not true.  Perhaps in about 5% or fewer of the cases, the code official must make a judgment call because of some highly unusual situation, and occasionally these situations blow up into a controversy. Most of the time, people just don't want to comply. 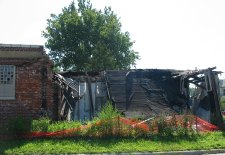 In spite of the hassles and the need for wise administration, I strongly encourage any well-run municipality or county to think about adopting a property maintenance code and a compatible set of other model codes as well. Your community does not have to invent this code; model codes are available, as discussed below.

The property maintenance code moves maintenance of an existing commercial building and the surrounding property from an option to a legal requirement for a responsible property owner.

When it comes to maintaining your housing stock, we think the standard property maintenance code from the International Code Council may be less effective and less specific than a housing code tailored specifically to your state or area. However, it's far better to adopt this standard code than to have no local laws addressing the condition of existing housing.


The leading standard code comes from the International Code Council (ICC), which publishes alternative codes too. Their process of using expert administrators to compile the code is explained on their website.

In the last few years the communities we have worked with seem to be gravitating away from the property maintenance code and toward the more all-purpose residential code from the ICC, which might be more appropriate for your own local housing conditions.

If your community wants to use this property maintenance code, your city council or other governing body simply passes an ordinance referring to the name, authoring organization, and year of the code.

They also set up a local enforcement mechanism, whether through writing that process into the local adopting ordinance or simply through administrative decision-making.

Ideally even before the code is considered for formal adoption, someone in your city government that is going to enforce that new code sits down and reads it thoroughly, picking up on any requirement that won't work because of a particular locally common building material, cultural custom, soil condition, or other peculiarity of your town.

Also your local expert and enforcement officer may notice that you need tougher regulations in some areas. For example, you might want to add seismic requirements if you're in an earthquake zone.

In that event, your city council just adds a list of exceptions to the ordinance adopting the property maintenance code. These could include a mix of both stiffer and more lenient provisions.

Often cities and towns won't update their requirements every time a new code comes out, which is approximately every three years for the most common codes right now.

So don't be shocked and outraged to find out that your city council is living by the 2006 version of the existing property maintenance code, just for example. That can be a good decision on the city's part.

However, the easy updating is a major advantage of using a model property maintenance code as compared to developing your own code locally. While the latter is possible, it's a herculean task. You might do it once, but then doing it every three years (the current ICC interval) would get to be a real pain.

A property upkeep law also may address what are commonly called nuisances to some minor extent. It does prohibit accumulation of trash and debris both on the exterior and interior of a building.

A nuisance is those old barrels just sitting in the industrial yard, the junky loading dock behind a swanky retail stores, and all kinds of other messes on the rear of the property.

When towns and cities speak of their "nuisance code," it may be a collection of provisions from various adopted codes and local additions.

Lastly we want to mention that the property maintenance code is often the mechanism by which a town or city moves to condemn a property. See our answer when a site visitor asked about how to get the city to condemn an empty building.

Other Building Condition or Construction Codes

We devoted a page elsewhere to why you should adopt a building code. A building code applies to new construction, specifically during the construction process. It is critically important to safety, even more than to appearance.

There are several other codes you can consider adopting, including the following. Note that the first three collectively are sometimes lumped in with the building code in conversation.

Possible Conflicts Between the Property Maintenance Code and Other Codes

You may adopt several codes from different sources. However, when you start adopting multiple codes because you become so excited after reading this page that you wanted one of everything, you need to be aware that you could be creating conflicting sets of rules if you adapt and adopt code from different groups. Even if you stick with the International Code Council family of codes, if you write local amendments, the property maintenance and existing building codes might be in conflict or at least send different signals to contractors and homeowners.

So seek advice, make sure a local expert actually reads the codes, and think hard if you want to adopt more than three or four compatible codes. For example, a performance code could well be in conflict with a building code, and you may need to think about how your existing building code would interact with an energy conservation code, should you decide to add the latter.

One final note is that you are likely to hear so much about LEED® certification, a program of the U.S. Green Building Council, that you may begin to think LEED® is a code too. It isn't a code, in the sense of being a law. It is similar to a code in that it sets a standard, but it's an entirely voluntary standard.

A key feature is that the certifications have different levels, as in Silver, Gold, and Platinum. In addition, the requirements for meeting a certain level of certification are somewhat flexible; there's a point system. Things that the writers of this certification think are extremely important earn more points.

Of course a few places are experimenting with making a law that says that all new buildings of a particular description must meet the standards for LEED® certification, but these would be the exception to the rule.

This program emphasizes energy conservation, the lowest possible carbon footprint for the building, using recycled materials, and generally being green.

LEED also is just one brand of "green" certification; there are others, most of which charge lower fees to the applicant. Similar types of certification are available in European nations.

Be aware that the code companies do charge for paper copies of the property maintenance code and any other codes you want to purchase. However, the popular codes cost about what you would expect for a comparable soft-cover technical book. Your code inspectors and any administrators can become members of a code organization, but membership usually is not mandatory for governments that adopt the code.

However, the ICC rapidly is developing and offering for sale various digital formats of the code, and it has deployed a much needed online feature allowing the general public to read a code from their website. Of course this will not include any local modifications you make, but a copy of your usually relatively short local ordinance plus the online standard code will give the public a way to figure out exactly what your code requires. These digital formats reduce the cost of administration slightly.

LEED® certification is fairly pricey, but it's the property owner who bears the cost. We figure they are paying to add to a marketing tool primarily.

But we're saving for last the cost considerations you're going to hear about when you adopt codes. That would be the cost to the builder and ultimately the building's owner. Some people will complain loudly that adopting a code will cause the construction of their building to cost thousands of dollars more.

My advice is to listen politely to all of that. Ask your inspection staff or whatever contractor you plan to hire for enforcement for advice about the legitimacy of such complaints in the case of specific requirements of the code. It is certainly possible that quirks in your own local building practices, whether based on geography, available materials, or custom, make it expensive to comply with certain provisions.

Ask other experts you trust, such as your own favorite carpenter, plumber, electrician, and so forth. These folks probably won't be lacking in opinions. Our educated opinion is that most code provisions add value to a property at least equal to their cost; it is those glaring exceptions that cause grumbling.

If it seems to you that a particular code provision is more about appearance than safety and function, certainly your city can consider deleting that provision by reference when you adopt your code.

Concentrate on the examples that your local experts and activists bring up, think about what would be lost if you remove that provision, and if the costs of the code provision outweigh the benefits, there is nothing wrong with making that particular provision and exception that is called out in your ordinance of adoption. But don't let a few obnoxious examples of code wording railroad you into thinking that the code in general adds too much to property maintenance costs.

The property maintenance code shouldn't impose much in the way of costs that sensible property owners are unwilling to pay. Basic upkeep helps property values remain stable or appreciate. When the costs of a certain provision outweigh any potential benefits, your community can exclude that aspect of the prepared standard code.

Of course, your town also has to be able to afford the cost of a competent inspector and an enforcement mechanism, meaning a municipal or other court. If you're a small town, there may be opportunities to share an inspector with other nearby small towns.

But seriously, for safety's sake, provide for your town to receive the benefit of the countless hours of deliberation among national and international experts about what the building codes, and all other codes, should be.

To keep your city or town competitive in the marketplace of property values and rents, you need to force owners to pay attention through a property maintenance code.

Read About Some Related Topics