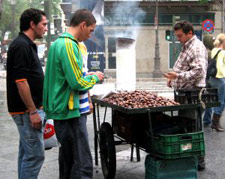 The story of microloans or microfinance begins at the Grameen Bank in Bangladesh. There Muhammad Yunus thought that if he gave very small loans to poor women formed into support groups, eventually several small businesses could result.

Eventually his efforts were rewarded with a Nobel Prize, and the concept has spread around the world. The United Nations declared 2005 the International Year of Microcredit.

Although the model hasn't led to success in every single instance, we think that this tool still should be considered if you have talented people with small business ideas. In line with our thought that every community has talented people, who do have good business ideas or could have them with a little coaching, this idea deserves consideration as part of a community economic development strategy.

In Bangladesh, the groups decided which woman's project idea should be funded first. When the loan had been repaid, the group was able to make a second loan to the next most likely to succeed woman.

This idea for supporting very small business start-ups has now spread rapidly, although India and Bangladesh are still the leaders in the microcredit or microfinance industry, which aims to assist very poor households.

In the United States, the microloan idea has yet to gain the popularity it enjoys in emerging markets, and it is certainly not practiced in the same manner just described. Frankly the research does not show that microloans have the same transformational impact in America as can be seen in smaller economies.  However, the federal Small Business Administration (SBA) does sponsor a microloan program. Only small businesses and non-profit day care centers are eligible applicants.

The SBA does not fund potential entrepreneurs directly. Inste works through nonprofit organizations that they call intermediaries. The maximum loan they may make available to any individual borrower is $50,000, with the average at about $13,000. The maximum repayment period is 6 years. Interest rates typically are higher than those found at a mainstream financial institution. Unlike some other SBA programs, such as the 7(a) program, the microloan program is not a loan guarantee but rather an outright loan.

The intermediaries for the microloan program are required to provide technical assistance (business advice) to loan recipients.

In the federal U.S. program, the generalization we made above about no collateral being required doesn't hold true for the most part. However, the intermediaries each make their own policies about how they determine who is creditworthy under the microloan program. See the up-to-date list of intermediaries here.

While critics have been saying for a while now that the SBA 7(a) loan guarantee program adequately meets the needs of the same size of small business at a much lower administrative cost, so far the advocates of the microloan program's extra emphasis on minority and women entrepreneurs have prevailed. The McCain National Defense Reauthorization Act for fiscal year 2019 even increased the amount that each new intermediary can lend from 5 million to 6 million U.S. dollars annually after one year of serving as an intermediary.

Microloans from Your Peers

The microloan idea also has been adapted to the Internet. A leader is Kiva, in our estimation. There you as a private individual can connect with folks who need microloans world-wide and now in the U.S. as well.  Note that this differs from Kickstarter, GoFundMe, and other crowdfunding sites in that Kiva loans are supposed to be repaid, and a very high percentage are.

This is called Peer to Peer lending (sometimes P2P).

Although subject to a number of criticisms about unintended side effects of these programs, overall the idea is successful and worth exploration in any community where there are people in poverty, interested in starting a small money-making business, and unable to obtain credit elsewhere.

All of these crowdsourcing apps work best with a slick presentation and with a considerable amount of publicity, social media support, and direct contact to potential funders.

Microloans from the Community Perspective

On this site we encourage every type of community to identify, train, and nurture its entrepreneurs.

In areas of concentrated poverty, the general hopelessness seems to make a microcredit program seem like a pipe dream. But it's very real and very viable.

In the U.S., banks are often reluctant to service very small business loans. So if you're in an American neighborhood with lots of needy people, see who has the smarts and drive to do a business. Connect those people with an SBA microloan intermediary.

If you're in the U.S. and don't find a nonprofit organization serving as a microloan intermediary in your area, you could encourage a strong local group to pursue funding to administer such a program.

Most larger cities have women-owned business associations. Since many beneficiaries tend to be women entrepreneurs, this could be a natural fit.

If you don't find a strong organization, think about the possible need to start a community development corporation.

Despite the well-deserved hype about microloans--and I'm an enthusiast or I wouldn't write a page about them--they usually don't provide many employment opportunities for others. They typically are a way for sole proprietors to get started.

At least in the U.S. where fewer than 15 percent of workers are self-employed, microloans aren't an economic development engine as much as they are a social program that takes someone off unemployment or moves a retiree completely dependent on Social Security into a more viable economic situation.

Those are still excellent policy outcomes, deserving much more attention in areas with a community poverty problem.

Communities that have established an active entrepreneurship support program should consider how they can channel those with smaller credit needs into a microloan program.

Microcredit is a great concept, and a decent SBA program in the U.S., but don't expect microloans to solve everything. Their success in fulfilling unmet needs in the U.S. depends on the number of very poor people who take advantage of it, and the skill with which the intermediary organization manages the technical assistance, continuing education, and networking opportunity aspects of the program.

As an economic development program, it should be emphasized only in areas of concentrated poverty, which includes both extreme poverty within a global context and relative poverty within a more advanced economy. In middle-class communities, more routine entrepreneurship recruitment and training will produce larger community results in terms of jobs and wages generated.

Microloans are a great approach for those neighborhoods and communities where lifting just one individual out of poverty, and therefore out of hopelessness and dysfunction, is a victory.

We continue to be optimistic about tiny loans in parts of the world where capital is difficult to access, especially for people with entrepreneurial talent but lack of access to economic centers.

Topics That May Be Related to Your Microloan Project