Wildfire Prevention Is a Community Responsibility 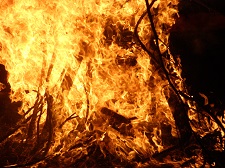 Wildfire prevention has become an important public policy issue in most parts of the U.S.  People want to live in picturesque and scenic areas.  However, the combination of residents who do not understand the implications of their location choices and communities that eagerly embrace development patterns posing wildfire risks leads to a very expensive problem for homeowners and communities.

Speaking of expensive, the U.S. Forest Service now spends over half of its annual budget on fighting wildfires.

Many scientists now believe that global warming contributes to the frequency and severity of these fires, as the "fire season" now becomes longer and longer.  Areas that have no previous history of wildfires now are finding that they feel less and less secure.


For these reasons, we believe fire-resilient community design should feature prominently in new plans being prepared by planning commissions and consultants in areas prone to large fires. Make this a feature of your resiliency planning. (For more on this, see our commentary when a visitor asked what resiliency planning means.)

Wildfires are yet another cost of sprawl.  If you are involved at all in regional-scale planning, please urge others to be mindful of yet another negative effect of urban sprawl.  Sprawling areas tend to leave larger areas of woods nearby, when compared with suburban and urban development.

Historically, heavily forested areas, found in the West in the U.S., responded to the fires set by lightning as natural phenomena that helped to support wildlife and the regeneration of the forest.  Now it seems we are out of balance.

Wildfire Prevention Through Land Use Planning

How would wildfire prevention through land use planning principles work?  Let's list the steps your city, county, or town should take:

When reviewing and approving individual developments, make sure that the perimeter of the subdivision consists of a "fuel break" that a wildfire is unlikely to cross.  Consult with experts to determine this distance, as it is dependent on the particular vegetation that predominates in your area.  Then group the lots into areas that have less fuel for fires.  This has the added benefit of decreasing development costs of course.  Even consider requiring that this perimeter area be kept completely bare, except perhaps for some xeriscape (drought-tolerant) ground cover.

Also when approving developments near forests, emphasize redundant points of road access into and out of the subdivision.  You should have more than one way to drive into the development anyway (called a point of ingress and egress), but be especially conscious of this rule of thumb when planning a fire-resilient community.

How Local Government Can Implement Firewise

Wildfire prevention has become such a critical issue that the National Fire Protection Association has created a program called Firewise to help educate residents and communities interested in what professionals would call hazard planning and mitigation.

This is a voluntary program, but about 1,000 communities have become certified in the Firewise system.

However, we don't intend that this web page serve as an uncritical summary of Firewise.  One of our criticisms of their approach is that there is insufficient attention given to the fact that local municipalities or counties have the power to control land uses, if only they use that power wisely.

Next let's discuss the six of the seven Firewise recommended home features that can be regulated by a local government.

1. Fire-resistant wall construction likely would mean brick, concrete, or stucco exterior walls.  We are not aware of much history of outright prevention of wood frame structures, but a little research should be able to turn up legally defensible ways to prohibit frame buildings for the sake of wildfire prevention.

2. Fire-resistant roofing is another feature that deals mainly with choice of materials.  Metal, tile, and slate roofs obviously offer superior fire resistance, as do what are known as Class A asphalt shingles.   Once again, careful consideration of the legal defense of such regulations will be important.

3. Structures that are attached to the primary residence in some way need to be fire-resistant.  We're speaking of garages, decks, porches, utility sheds, trellises, shutters and fences.  This is yet another instance where material specification as part of local building code is important.

4. Consideration of the Home Ignition Zone should be required.  This idea means that at least 30 feet, and ideally more like 100 to 200 feet, around the home are kept clear of combustible materials.

What the planning profession calls accessory buildings, such as storage sheds, barns, and outbuildings, need to stay quite far away from the home or else be constructed from fire-resistant materials.

Local government has limited success in trying to fix bad housekeeping.  You can try requiring prompt removal of dead trees, but you're never going to have enough legislative leash to get by with requiring removal of dry leaves, for instance. Regular code enforcement addressing issues such as clunker cars or piles of debris would be helpful.

5. Firewise landscaping  probably will be much more difficult for most municipalities or counties to regulate. Most cities do not regulate the placement, extent, and density of landscaping.  If your codes are extremely detailed now, with no public outcry, you might discuss these measures for wildfire prevention.

Obviously trying to fix stupidity through regulation has its limitations. But with whatever powers of persuasion that community organizations have, they should try to educate their constituents about highly flammable plants and less flammable plants that are popular in your area.

One thing that local governments should check is to make sure that beautification or environmental measures that they require, such as tree planting, don't inadvertently make the task of wildfire prevention much more difficult.  When tree preservation ordinances make it difficult to cut down unhealthy trees, these also could be contributors to the problem.

6. Local governments can and should think in advance about emergency evacuation routes and signage, whether or not they feel they have the legal and political backing necessary for taking the preventive steps outlined above.

You may want to understand much more about the Firewise program. By giving so much space to it, we aren't necessarily saying that we think this program is sufficient, but it's certainly a worthwhile starting point for communities.

Lastly, another important matter for local government officials to consider is the extent of its vegetation removal prohibitions.  If regulation becomes so strict that every invasive species of understory shrub or tree has to be preserved, you are asking for trouble in the form of fires.   Consider allowing a regular regime for clearing out the forest floor, or at least minimize the difficulty and expense of obtaining permits.

Read More Pages Related to the the Urban-Wilderness Interface