How to Organize Re-Zoning Opposition 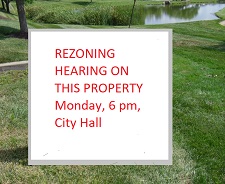 This crash course in re-zoning opposition will educate you about the knowledge and attitudes that will increase your odds of success if an unwanted zoning change is proposed in your neighborhood. Incidentally, professionals would write that as rezoning, but we noticed that many readers don't do the same.

Neighbors have to consider the worst possible case, in terms of the land uses permitted under the proposed change. Someone in the neighborhood needs to get on-line to read the zoning ordinance.

Many zoning code regulations are not models of clarity. If you need help understanding what you have read, you will need to ask the city employee in charge of administering the ordinance. Zoning ordinances almost always have a definitions section, though, so if you have questions about a term, check there before you pester the employee.

If the ordinance is not on-line, someone needs to go to city hall or at the very least, talk to a trusted city employee by phone and ask for the entire text pertaining to the proposed zoning classification to be e-mailed out or read aloud. We describe this step first because occasionally when you find out the facts, you will see that you are not opposed to the change at all.

Understand the Process To Be More Effective

You and your neighbors will need to understand the process by which zoning is changed if you are going to mount an effective re-zoning opposition. State law sets minimum requirements for public hearings, who must be notified in advance of these hearings, and how the notification process is to be carried out. Usually a city, town, or county holds two public hearings, one each before the plan commission and the city or county council. A tape recording or transcription usually will be made.

In many places, the property owner can initiate the rezoning proposal, which also might be called a zoning amendment, change, or petition, just because he or she wants to.

The owners may not be required to tell the local government or the public what the plans for the property are, even though that is the first thing that you as a neighbor want to know. Further, if they tell you, usually there is no penalty for lying or changing their mind.

Public hearings are becoming a little more formal all the time, partly because lawsuits are more common than in the past. This means that your re-zoning opposition group should not lie, make outrageous statements, threaten public officials, or speak so angrily that they will be embarrassed later if the recording ever comes to light.

As we said, that first public meeting about the request for a different zoning classification typically happens at a body of appointed, unpaid citizens that may be called a planning commission, zoning commission, zoning board, or plan commission. You and your neighbors need to plan to show up in person to express your re-zoning opposition.

Sometimes a staff member may say that not everyone has to come to the meeting. They might do this just to make the commission members feel less uncomfortable.  But don’t trust his particular advice for a minute.  Numbers of bodies in the seats do count..

Almost everywhere in the U.S., the zoning board does not make the final decision on a proposed rezoning.  Ask city or county staff if this is the case in your location. While you are asking questions, find out if the city or county council listens to the planning commission almost all of the time. If so, devote considerable effort to preparing for this first hearing, and make sure you have as many people from your neighborhood attending as possible. Be aware that the plan commissions is not as political as the City Council but re-zoning opposition still counts.

The zoning board can take more than one meeting if they like before they pass their recommendation on to the county commission, board of selectmen, or whatever your elected body is called.  When you get to the City Council level, it is extremely important to impress that group with your unity in opposing this rezoning.

Again, the City Council is not required by any law to vote on the same day or evening as the public hearing is held. In fact in some states that cannot occur because several “readings” of the ordinance that would provide for the rezoning have to spread over more than one meeting. But eventually there will be a vote. You need to get ready.

Prepare for the Zoning Public Hearing

If your neighborhood is small enough that you can canvass everyone and tell them about your re-zoning opposition and discuss the negative effects of the proposal with them, that will be great. Of course if you live in an area where one or more neighborhood associations or block units are active, they will be your best allies in organizing resistance to the proposal.

If you have time and energy for a meeting among yourselves, that is ideal. Getting together beforehand makes people more interested in and excited about the issue at hand than simply talking with them one-on-one. You need your group feeling highly motivated.

Only a motivated group will stay together long enough to overcome any feelings of discouragement if the professional advice is against your position and if the planning commission recommendation is contrary to your wishes.

Watch for Changes as the Process Moves Along

Sometimes after the planning commission meeting, or even before it, the developer or other person seeking a re-zoning will contact your group to try to discuss the matter and reach agreement, or to "buy you off" by giving you something you want.

The proposal to change zoning may be altered substantially as it moves through the public hearing process, and this is perfectly legal in most cities. This is especially likely if the proposal is complex or if the planning commission recommends favorably only if modifications are made.

Watch for this possibility. Do not allow the core members of your re-zoning opposition group to appear uninformed about the current nature of the proposal or the schedule for the process; this makes it easier for decision makers to discount their input.

Organize to Oppose a Land Use Decision

Prepare for the fastest possible timetable. Even though a proposal may appear quite controversial to you, it may seem routine to the decision makers, and they may not want to hold back on making a decision while you do your organizing work. In most jurisdictions, it is theoretically possible to complete a re-zoning in six to eight weeks.

That does not give you a lot of time, so concentrate on understanding the facts about your re-zoning opposition and the process you face as rapidly as possible.

Quickly identify one or two leaders from among your group, preferably people who are well respected in the community and/or well versed in real estate development matters. Designate these people as the chief spokespeople. Using popular people in the community as spokespersons will assure that your cause is taken seriously and can really carry some weight with planning commissions and city councils.

Prepare everyone who will attend from your neighborhood to be smart about what is possible if the re-zoning is granted. Educate them about the re-zoning opposition process, and prepare them emotionally for the likely amount of time it will require of them. And the length of the whole process.

You do not want to "peak too soon," so that your group is tired of going to meetings just as you approach the final meeting, which is the most important one for decision making.

If you know or can learn any zoning principles, by all means take every opportunity to show off your sophistication. Some commissions and councils are a little intimidated when citizens actually know what they are talking about.

So dig into the zoning principles taught on this site. Look for the potential to call the re-zoning a spot zoning, one of the worst things a city can do in terms of legal defense.

Spot zoning is when comparable properties nearby are zoned differently, but the applicants are receiving a favorable zoning classification because they asked, or because they are being favored.

For example, look around to see if every other lot on a residential street is zoned residential, but for no good reason, someone is asking to have one of the lots zoned commercial. This would be a stereotype version of spot zoning.

On any commission or board, someone will have heard of spot zoning and know it's bad, so be sure to point it out early and often if this argument will bolster your re-zoning opposition.

Even if you attend City Council, show up in good numbers, and go away feeling as though you surely will win, be sure to turn out an equal number of people at the next meeting if no final vote occurred.

Sometimes a cowardly City Council will decide to postpone their vote, hoping that the people will forget to come to the next meeting and they can vote then with less public scrutiny. Keep going to meetings until the decision is final. At other times the motivation for postponing the vote is better, but if your neighborhood does not attend the second meeting, the council may sense that folks really do not care.

Even if the proposal is voted down, watch for the developer or other proponent of the re-zoning to resurface. Be sure you keep names, addresses, phone numbers, or e-mail addresses you may have accumulated during the re-zoning opposition campaign. Often developers are not deterred by the first loss.

Sometimes a re-zoning proposal will recur with only slightly different facts, and you want your second round of community organizing to be easier than the first.

Learn More That May Be Relevant to Your Campaign

How to Fight City Hall