Shopping Center Redevelopment Should Focus on Mixed Use 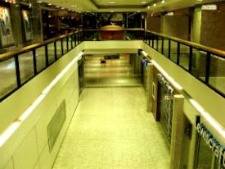 If you have a dead mall, you need to learn about shopping center redevelopment right away. It's nearly universal to go into denial first, but try to jump right on it when you notice an increasing percentage of empty stores. If you ignore the situation, it won't improve; it will in fact deteriorate. Here we are speaking to both city governments and concerned neighbors and neighborhood associations. Mall owners tend to "keep a stiff upper lip" and act like they are not concerned, but community support will be welcomed once they admit there is a problem.

This problem surfaces in almost every metropolitan area and in smaller cities as well. In fact, the term "dead mall" has become enough a part of the vocabulary of the U.S.  Dead mall is the term for a shopping mall that feel lifeless, has many vacant storefronts, and lacks the traffic to generate excitement and a positive sales environment. There's even a fun dead malls website devoted to the topic.

It will get worse. Online shopping has taken hold so firmly that we do not believe people will revert to their previous levels of in-person shopping once the pandemic has calmed down. And of course the sharp upward trend for online retailers began several years before the pandemic. Also a lower rate of labor market participation and continued sub-par performance for restaurants, entertainment, and travel businesses do not promote shopping.

In municipalities or counties that rely heavily on sales tax, dead malls are not comedy. They signal a rapid and painful deterioration of municipal services if another ready source of revenue is not available.


In a mall, all stores are interdependent to some extent. Due to decline in retail shopping in stores, mixed use development is often your only real solution, but your dependence on sales tax may make it hard to acknowledge that.

You can spot a dead mall by looking at the parking lot. If there are very few cars near the doors, start learning about shopping center redevelopment.

Nearly every shopping mall is doomed to failure sometime. Shopping centers lack the diversity of a true city or town shopping experience.

The theme park atmosphere can exude only one basic mood, so just as theme parks would grow old to most of you if you visited them every couple of weeks or every month, people have become quite bored with malls, especially since they are remarkably similar regardless of what city you are visiting.

From this perspective shopping center redevelopment is inevitable and should be as creative as possible.

Note that in just a few cases, less traffic simply means that the mall needs to be refreshed visually and perhaps the retail mix needs tinkering. In those instances where income and a style-conscious population support a mall, a city might contemplate shopping center renovation instead of redevelopment, which would change the land use.

If you're lucky enough to live in a central city that encompasses most of the urbanized metropolitan area, complain tirelessly to the city government about the condition of the dead mall.

Demand action, not platitudes about the free market system and other property owners having a right to erect a mall.

This city government has jeopardized your immediate neighborhood by allowing too much competing space to be built. This is an abdication of its responsibility for comprehensive planning, and you should call it what it is.

Often, however, the problem is compounded by the fact that the "new" mall, lifestyle center, or strip center that makes the center near you obsolete is in a different municipality, or even a different county.

In this case you may have very little recourse except writing a few ineffective letters to regional councils of governments or other organizations that have very little power to influence local land use decisions.

A regional planning commission should take charge and declare that there are too many malls now. It should set up a review process for shopping centers over a specified square footage, review the need for additional shopping, and deny all applications for new malls.

Exceptions are when population increases or tourism and economic development increases that support the need for significant new square footage of retail.

However, solid regional governance or a unified city-county government is mostly an apparition of a few scholars in the U.S., so usually nothing of the sort will happen. Therefore you may be left seeking some other ideas about how to deal with shopping center redevelopment.

Mixed Use as the Best Shopping Center Redevelopment Aim

Now we are going to tell you the plain truth. What works in shopping center redevelopment is usually "mixed use." The term refers to a mix of land uses, such as commercial (retail), office, residential, and perhaps other uses.

Many empty nesters would like to live in a beautiful condo with the ability to go to restaurants and shops without going outside, or at least very far outside.

Ideally your shopping center redevelopment can focus on and be built around some residential use; think of the wonderful high ceiling units you could offer, interspersed perhaps with some 8 foot ceiling units built two on a level.

In truth, residential development is now easier to finance than retail space in many communities, where overbuilt retail is common.

The advantages of mixed-use development include:

If you are near a college or university, you could do loft-style apartments offering panache for a moderate price. If you can divide up your mall a bit to lend a feeling of security, privacy, and quiet, perhaps through gradual transition from retail to office to residential, you might have an effective recipe.

Adapt Some Ideas from These Pages