Inclusionary zoning is a term meaning that the zoning regulations encourage, rather than discourage, the construction or adaptation of affordable housing, whatever that relative term might mean in your locale.

We'll just think of it as housing that is somewhat or far below the average cost in your locale. Its use has become critical in a few hot markets where skyrocketing housing costs have become a major public issue.

Inclusionary zoning, also called inclusionary housing, is a possible solution to the jobs-housing mismatch, which is a fancy term for the discrepancy between incomes and housing costs. It's equally important to say you should do away with the exclusionary zoning in your community. Let's explain. 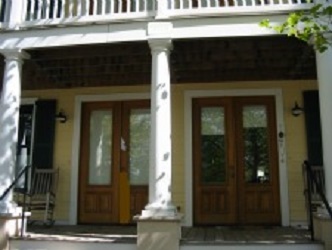 Exclusionary zoning is the opposite, and consists of requirements for large lots, large setbacks, and various amenities such as two or three paved off-street parking places, trees of a certain size and quantity, landscaping requirements, and even large home sizes. These measures serve to increase the income levels that will be required to live in a neighborhood, and may also serve to exclude minorities either purposefully or through thoughtlessness.

We have come to believe that inclusionary zoning is an important tool for addressing racial equity in community development. It can help bust up the pattern of perpetuating residential segregation in which African-Americans, or other racial minorities around the world, live far from neighborhoods of opportunity with good schools and good access to jobs.

Occasionally inclusionary zoning measures are enacted as standalone laws or chapters of the zoning ordinance, but probably more often, a local government simply combs through the zoning ordinance to identify requirements that work against lowering the cost of housing and tries to modify those requirements in a way that will help broaden the range of income levels that can afford to live in a particular location.


For an inclusionary zoning approach to improve housing affordability, consider whether the lot sizes for each of your residential zoning classifications can be reduced without great harm. Many people enjoy not having much of an expanse of lawn to care for.

Maybe you can zone for more villas, townhomes, patio homes, and condominiums, as well as write a zoning district classification and assign a zoning district, or maybe two or three districts, that accommodate mixed-use development.

We know that neighbors often resist greater housing density, but you can use visual preference surveys, tours of nearby developments, and conversations with the developer to help defuse that.

You can actually provide some desired amenities while pushing your zoning and/or subdivision regulation to be inclusive. For example, consider whether your minimum required street width can't be lowered. You may not have thought about it, but the cost of building those wide streets is a developer cost and pushes up the price of housing.

The complete streets movement is popular, because it slows down traffic, puts neighbors closer to each other, reduces future public costs of repaving, and explicitly allows for pedestrian and bicycle traffic. But it also has the potential to reduce the initial cost of development if the overall paved area is reduced.

Review development-related fees to see if the government actually requires that much revenue to process an application. My experience is that usually application processing is a money-loser, but if your government has been tempted into raising money through higher fees, you're increasing the cost of housing a bit. If your city is charging impact fees for new development, of course you are increasing housing prices considerably.

Also see if you can reduce administrative delay in approval times, because delay means a builder paying more carrying charges on the land.

But also you should reduce large lot sizes, unnecessary setbacks (especially in the front yard of residential streets), excessive parking requirements, and even height limitations if and where appropriate.

Adding an Extra Housing Unit on a Lot

Another really useful approach to providing some discreet affordable housing and even low-income housing is the alley house, carriage house, granny flat, mother-in-law quarters, accessory housing, garage apartment, or whatever term for accessory dwelling units you may be familiar with.

If you have a community full of elegant two-story homes widely spaced, with large rear yards and alleys, can't you provide that people can build carriage houses along the alleys? Provide strict standards for them, and require architectural review so that the carriage house is in some sympathy with the main house, but you can do that. I know you can.

If you zoned to allow new carriage houses in some zoning districts, that would be an example of inclusionary zoning.

The Lincoln Institute of Land Policy has issued a great report on inclusionary housing.  This report is thorough (but not in an exhausting way).  It gives examples of inclusionary housing programs, discusses policy matters to consider when designing a program, acknowledges problems with regulatory approaches to inclusionary housing, and deals honestly with staffing and other resources required for successful long-term implementation.

It's worth noting that in a few instances, states have actually enacted legislation to preempt local governments from enacting measures that would contain housing cost.  Examples are the U.S. states of Kansas and Indiana.  Mostly though it is local political dynamics that stall zoning requirements that would promote equality.

For more detailed ideas, you could check out this sample inclusionary housing ordinance from the Institute for Local Self-Government in California. As the authors themselves seem aware, this is overkill for most of you and should not be followed to the letter, but it is a useful starting point for those of you who want to think about how this concept would work in your own community.

This reminds us to say that it's a good idea to include a description of your purposes if your inclusionary provisions are part of the overall zoning ordinance. Whenever anything slightly atypical appears in a zoning ordinance, it's the best legal posture for a city council to make findings of fact that are incorporated into the ordinance ratifying the amendment. In this case your town or city should be presenting its reasoning as to why the supply of affordable housing in your community is inadequate, or why certain groups are excluded. Also include a summation of the inclusionary argument right in the zoning ordinance amendment itself.

Lastly, some of you will need really aggressive policies well beyond the scope of inclusionary housing to help control housing prices. Consider forming a community land trust where rising land costs are a major contributor to pricing people out of home ownership.

These Pages Are Also Related to Inclusionary Housing