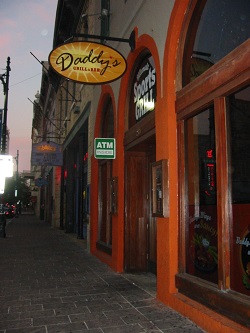 Employing a night mayor means that a city is adding an ombudsman or ambassador to look at everything from issues facing employees who work at night to promoting the economic boost of nightlife, and keeping it safe and nuisance-free for both visitors and residents. Conceivably a private downtown organization houses this position.

Such a position is increasingly being incorporated into a city government's structure. Despite our use of the term night mayor, sometimes these positions are called something else relevant to night-time and to either economic development through more nightlife and tourism or to resolving problems or potential problems for people who must work at night. We actually think the title night mayor is misleading because it creates the impression of an elective position rather than status as a regular city employee, and also because it may carry the connotation of more actual power than may be warranted.

But whatever you might choose to call this position, it serves a valuable purpose in many situations. Like a disabilities coordinator for a city, the office of the  night mayor simply applies a particular lens to all city services, infrastructure, and citizen issues.

Benefits of Having a Night Mayor

From the economic development perspective, one of the chief duties of the night mayor is to assure that a city is able to attract and retain any portion of the workforce that companies need during the night time hours. It isn't easy for workers to manage the challenges of working at night, so the job of the night worker ombudsman is to help assure their comfort, safety, and reliability as employees.

Here are some examples of issues that third shift employees might face:

You could be forgiven if you are reading this in the U.S. and you thought before reading this far in the article that the primary function of the night mayor would be to assist in crime-fighting. Of course there is a benefit to adding a city employee who coincidentally will hear about hidden crime and maybe even see something that would be helpful to law enforcement. But you will need to think beyond potential crime prevention issues if your night mayor is to be an effective ambassador for the city.

Any information that the night mayor obtains that might be useful for preventing or solving crimes should go directly to the police department. In addition, he or she might notice something about the arrangement of buildings, gates, landscaping, and more that would provide an attractive harbor for the criminal element. An awareness of CPTED (Crime Prevention Through Environmental Design) should be required of the night mayor, with any issues noticed during the night hours reported to the police and possibly to neighborhood associations as appropriate.

The second major benefit of initiating a night mayor office for your city is to intensify the city's efforts to attract and retain night life. This might be of interest simply as part of a young talent retention program; in fact, nightlife is cited as a reason to develop loyalty to a city. (See our community attachment article for a full explanation.)

Second, night life in the form of a live music scene, or even a shows-and-gambling scene, may become enough of a specialty for your city that this activity becomes part of your tourism and economic development strategy to build your  economic base.

Consider American cities such as Nashville, Austin, and Las Vegas for examples. If you develop an economic concentration in after-dark entertainment, you will want to assure that parking lot lighting, directional signs to parking, street lighting in general, and safety from crime greet your visitors. The night mayor will be in an excellent position to respond to complaints, personally notice conditions that become inhospitable to visitors after dark, and help resolve problems that arise from pedestrian or traffic congestion, loss of on-street parking for nearby residents, and nuisances such as public drunkenness, public urination, noise, vandalism, littering beyond what occurs typically in the daytime, pile-up of trash because night-oriented businesses don't put out their trash at the same times as daytime-oriented businesses, and spillover of lighting into upstairs bedrooms of nearby residences.

Car break-ins can become a significant problem. Since sometimes owners don't report these incidents to police if nothing of value was taken, police reporting may not adequately reflect the scope of this fast-moving problem. The night mayor can notice this, and work with appropriate city agencies to deter this behavior. Cameras, extra lighting, attendants at parking lots, and police foot patrols can all help.

It is inevitable that the "24 hour a day" activity we all say that we want for our cities will create some conflicts between interests, whether that be between business and residents, between types of businesses, or between law enforcement and economic development organizations that want to promote more nightlife. The night mayor can help mediate among competing priorities and competing policy goals. After listening to all parties and making first-hand observations, the night mayor can help develop novel solutions that will allow overnight vibrancy without compromising the peace and quiet that others crave.

Land use arrangements formerly thought to be compatible, such as shared parking arrangements, suddenly may become a problem if businesses are not following the expected pattern of times of use. Resolving these difficulties within existing codes, or calling the attention of the planning or code enforcement offices to these new code issues will help facilitate the development of new legislation in line with the city's stated goals.

When new housing is proposed adjacent to an existing or planned music venue, for instance, the night mayor could play a major role in helping a planning commission determine conditions that would mitigate the potential sound and other issues for future residents. Thus it is important that regardless of where the night mayor is housing in the city government, which might be in the elected mayor's office or in the economic development office, the night mayor must cultivate a close working relationship with the planning department.

This relationship could provide new qualitative information for the planning department, and in turn the planning department can conduct economic impact or other studies that will be useful to the night mayor, particularly one who is charged with increasing the amount of nightlife in a city. The night mayor might become a valuable member of the review team when new permits, new construction, or even rezonings are proposed.

The night mayor should be the first responder to problems that develop because of changing lifestyles and technologies. For instance, ride hailing services are suddenly causing massive traffic jams outside of some concert venues as concert goers try to find their Uber after a night event.

In addition, the night mayor is in a unique position to notice and document any issues with venues themselves. Knowing which ones routinely flout alcohol laws, allow an over-capacity crowd to gather, or cover up illegal behaviors of many types on the part of their patrons can be helpful to law enforcement, neighborhood associations, elected officials, and economic development and planning professionals.

On the other hand, cities that are trying to grow and improve their social districts may want to use the night mayor as a liaison to try to resolve these issues without issuing formal citations for violations, instead of as an informant to the rest of city government.

The night mayor should be able to shed light on whether more liquor licenses can be absorbed in a particular area, or whether existing bars, restaurants, and night clubs already are starved for customers.

But in addition to problem solving, we would hope that a night mayor office would imagine new opportunities for friendly evenings and nights in a community. It would be especially helpful to invent new ways to keep teens and young adults engaged in healthy recreation or productive activity during the evenings. Safely lit basketball courts, skateboarding parks, break dancing venues, pickup soccer fields, and platforms for musical jam sessions may provide additional eyes on the street to keep everyone safer. An additional benefit is less time spent drinking, leading to fewer beer cans for city crews to pick up in the morning.

In fact, the night mayor could coordinate with the parks department to explore safe parks from the perspective of the after dark user. Outdoor concerts in parks also can provide positive alternatives for the community and attract visitors as well. Clearly, if the night mayor's job is to bolster tourism, some special event planning and programming savvy should be part of the job description.

If your city is thinking about a night mayor, we can recommend a skilled consultant in this niche, the Responsible Hospitality Institute. Alternatively, you can network with cities who have night mayors already. The group is as diverse as Paris, New York, Pittsburgh, Fort Lauderdale, and London. With the rapid expansion of a night mayor role, regardless of the exact title, every place from major cities to college towns can find a peer. Tailor the examples to your own unique needs and policy goals.