Making Safe Parks for Everyone 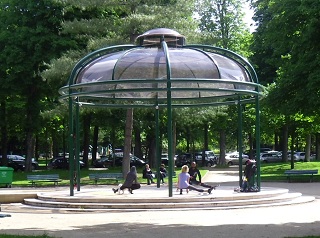 The most important way to create safe parks is to assure a steady and abundant supply of visitors, whether the space is considered "active," meaning set up for sports and such, or "passive," which is space for strolling, picnics, sitting, and the like. Having plenty of people around to observe what happens helps to prevent crime and undesirable behaviors of all types.

Erving Goffman, in his classic book, Behavior in Public Places, says that parks allow a "looseness" in behavior standards that is not acceptable in more tightly structured public settings.

We don't think he was saying we should tolerate anything and everything in a park, but rather that all of us humans bear some responsibility for reining in out of control behavior within a loose space such as a park.

Parks get reputations, just like neighborhoods and people. When the reputation is bad, it's difficult to reverse. So address rumors, graffiti, and potential problems as soon as they arise.

"Potential problems" include large groups of kids traveling in packs, boom box issues, evidence of any sort of weapons or drug deals, and petty vandalism.

If there is an actual crime, be sure the neighborhood has accurate information. Word will get around, so if you're a neighborhood leader, be proactive and tell an accurate but unsensational version right away.

As parks are reconfigured or as new features and buildings are added, think carefully about how environmental design might help create a safer park. Check out our page on CPTED (crime prevention through environmental design) for more on this subject.

Park rangers and police presence certainly increase the likelihood of safe parks, and should be used in a concerted campaign whenever possible. Park maintenance employees also can be trained in watching for and reporting signs of negative activity. In some communities where trust in police is poor, a low key employee presence not implying any sort of law enforcement will be much more valuable than actual deputized park rangers.

Volunteer ranger programs serve many communities well. Could there be a more pleasant volunteer activity for an active retiree than walking or biking through a favorite park on a scheduled basis? Volunteers also aren't enforcers, but they can be reporters. Their mere presence can discourage negative happenings. Volunteer rangers also can assist with wayfinding or interpreting nature, by the way.


Educational programs in the schools are worth a try. When the history of a park becomes interesting, when its ecological benefits are considered important, and when it's generally cool to respect a park, you can hope that those youngsters grow up to be teenagers and young adults who will respect the park.

Anonymous telephone tiplines may be helpful in bolstering safe parks as well, particularly now that many people carry cell phones and may provide nearly instantaneous information. In fact your park department or district might develop an app to make it very easy to report an unsafe condition, whether that is because of bad human behavior, broken equipment, a fallen tree limb, stray animals, or a bully on the loose.

Low thorny bushes can be planted to discourage human activity where none is appropriate. Certainly plantings are more in keeping with park character than fencing off park areas.

Increasingly, parks are installing lighting and surveillance cameras in key areas. Sometimes a blue emergency phone system, similar to that on a college campus, is installed.

Attractive landscape lighting and spotlighting in areas where undesirable activity is concentrated may be helpful. While these may be helpful in apprehending a real bad guy or an immature teenager, the actual goal is positive activity, and plenty of it.

Functionality as a Key to Safe Parks

And to have positive activity, your park must be beautiful, comfortable, and functional. There are many types of parks, including neighborhood parks (sometimes the small ones are referred to as pocket parks), linear parks that might also hug a stream or a trail, and parks serving a larger audience.

Parks that accommodate nothing but playing fields are common in some areas, especially where there are many school-age children. Some parks contain multi-purpose recreational center buildings, swimming pools, golf courses, tennis courts, and so forth.

Dog parks, fenced to contain dogs and their humans, are increasingly common. The largest urban parks may house museums and cultural institutions.

Other are more passive nature parks and may serve not only humans but also birds, bunnies, or wild turkeys as open space.

Ideally within a park system there is some specialization, so that each park has a specific audience, reason for being, unique facility or attraction, and therefore a built-in user base. These repeat users form the basis of safe parks.

When a park no longer has a function, community leaders should be willing to allow it to become something else. There are two common occasions for this: (a) the small pocket parks are no longer functional because the neighborhood has changed and there are no children around to use the playground, and (b) the park was a poor choice for park land originally.

Sometimes the latter happens because a municipality required the dedication of park land when land was subdivided, so the developer contributed the most unbuildable gully or ravine on their property.

These no-longer-functional parks are indefensible. We haven't forgotten about the safe parks theme, but please understand that the purpose and function behind each park must be clear. This is critical to whether or not the parks will attract enough visitors to be safe parks now and in the future.

Design every facility to be durable, easy to clean, and easy to maintain. Include restrooms, drinking fountains, and fountains in your thinking.

Keeping those systems functioning and sanitary is important to the user experience, and remember that our goal is to keep users coming back.

Figure out the most vandal-resistant restrooms you can have. I'm not the only former municipal employee who has replaced the same restrooms two or three times during a relatively short tenure. Maybe you install composting toilets instead of porcelain or even stainless steel fixtures.

And while we're talking about waste products, remember an ample number of trash cans, the frequent emptying of the trash cans, the litter patrol (whether paid or volunteer), and the mutt mitts or pooper scoopers so that pet waste isn't left in the park.

After a summer weekend evening, empty the trash cans in the picnic shelters, whether or not it's a scheduled pick-up day. It's another plus in making the park feel well-maintained.

Why are we talking about these subjects in an article on safe parks? We believe good maintenance practices keep users coming back, and users make safe parks.

Over and over I have seen that the most purposefully planted, maintained, and ornamented parks command the most respect, thus are being used, and therefore are safe parks.

Let me emphasize again that vandalism and graffiti need to be addressed promptly. Art graffiti is another subject altogether; I actually like it. But you need to take a stand that makes sense about which graffiti is bad and which graffiti can add to neighborhood character or small town character. In many neighborhoods, there's no good graffiti, but that's a local discussion. Obviously Europeans are much more tolerant of graffiti than Americans.

Your park doesn't need to be 100% turf grass, which is expensive to maintain and not so environmentally friendly, by the time you fertilize it and run a gasoline powered machine to groom it. Ornamental native plantings could add terrific punch to the sea of green. If you embrace an alternative planting policy, explain to the public that the native grasses won't always look like puny little sprouts, or risk the impression that no one cares about this public space. Show photos of the mature plantings and then make a game of some sort about marking the milestones in the maturation process.

While we talk about sustainability for a minute, think about adopting a regenerative design approach if there will be any new construction in a park. Our interview at the above linked page gives a great example.

Show someone cares by thinking carefully about the amenities in the park. If you can afford it, add some public art. Art by school kids can be surprisingly colorful and effective. Try individually made ceramic tiles or a group painting of some sort. Environmental sculptures incorporating some of the waste materials from the park also can be pretty interesting, but you'll need a true artist to make this into something other than a scrap heap.

The more evidence of purposeful human activity that you can show, whether it is maintenance, creative plantings, or art, the easier it will be to make safe parks.

If you suspect that your community's parks are under-performing, read our answer to a site visitor who asked a question about how community members can evaluate their parks.

We're leaving the issue of child safety in the form of selecting safe playground equipment to your parks professionals. Nothing in life is 100% safe, so we think that parents who demand an absolute guarantee that a child never be hurt in a park are being unrealistic. Active play and actually encountering nature, instead of looking at television or a video game, involve some inherent risks.

However, as a neighborhood or community leader, if you observe what is obviously an unsafe piece of playground equipment, meaning it is broken or not functioning as its manufacturer intended, by all means speak up early and often until it is removed or repaired. And soft landing areas are important too. Recycled rubbery materials placed beneath playground equipment can provide color and enhance child safety as well.

The need for physical activity in our society among every age group is fairly obvious. The need for children to be out in nature might be less so, but commentators actually are discussing "nature deficit disorder" as a condition in which children are afraid of and uncomfortable in nature, due to lack of knowledge. So get those kids out to explore safe parks!

Read About Other Ideas Helpful for Safe and Engaging Parks

Cleaning Up Your Neighborhood Park