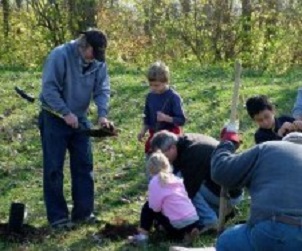 Many cities and towns internationally want to be known as green communities. The benefits of sustainable transportation, renewable energy, recycling, clean water, urban tree cover, and the like certainly help to make a more livable community and help to hold global climate change at bay.

Our experience is that communities can't become green over the course of a year, or maybe even five years, but that slow, steady measures taken toward that goal both make residents feel they are making a positive contribution to the world and give the community a slight edge in the important quest to be a city that can compete well for social and economic progress.

For instance,  my little suburb established a sustainability commission. They have led incremental steps toward lowering energy use within the city government and helped keep rooftop solar panels on the public buildings on the agenda. They advocate for EV charging stations, wrestle with getting the county government to stop spraying for mosquitoes indiscriminately, advocate against the garage forward design of homes to the architectural review board, and help residents connect to a rainscaping program for replacing lawn turf with native plantings where appropriate.

Then the restaurant community stepped up with a green dining program. The school district started teaching gardening in the elementary school. Backyard chickens became a bit of a status symbol for households with children in the school system, despite our backyards not being large.

No, one EV charging station in a public parking lot, more gardens than we had 20 years ago, and the elimination of plastic straws won't save the world. As a planner, I would like to see much more aggressive measures to make it safer to walk across our two major streets, decrease our energy usage, and assure that the whole of city government pay attention to sustainability topics, not just one commission. However, these limited measures that we have taken make our younger residents proud to live here and increase their loyalty to the community as a whole.

In short, the process of going green, communities also grow new industries for the local economy, improve public health, create hope for their citizens, and polish their image, which in turns helps to attract new investment.


There is no shortage of quality resources to help your community get started and to gain insight about how to put your own local twist on sustainability.

What stops most cities and towns from joining the trend is that they may perceive that being green or sustainable represents a huge effort, an uphill battle, and a fight not important to the general public. Actually that's a reasonable guess, but it's proving to be incorrect.

In a Western city where we were doing some consulting, there was a loud and sustained public outcry when the city decided to stop its curbside recycling pickup during the early days of the pandemic.

In another case, the local chapter of a national environmental group ran quite a negative campaign when a city government announced it would adopt one new "green" environmental principle per year to emphasize. The environmentalists wanted a much brisker pace. Yet, when we started consulting in that community ten years later, that same environmental group applauded the city's several major accomplishments, including solar installations at every city facility, replacement of the entire stock of street lighting with energy-efficient street lights that are activated only by motion on all but the most important streets, and the planting of well over 1,000 new trees on public and private land.

If your community seems reluctant, point out that some measures taken by green communities can be simple in concept, relatively inexpensive as municipal projects go, and extremely cost effective. For example, in Philadelphia, where the horticultural society had a strong planting program before being green was so stylish, Professor Susan Wachter's research showed that planting trees on vacant lots led to significant appreciation (more than 30 percent) in the value of adjacent lots. Philadelphia Greening has taken the art of planting trees and installing a uniform fence around vacant lots to a new level of neighborhood stabilization.

We find the STAR Communities division of topics, rating guide, certification program, and technical materials to be fairly practical, and we suggest that your city staff or sustainability commission (described below) look over those resources as you start your local work.  Their website includes reports from their certified communities. (Approach this and all certification programs with healthy skepticism, but often they motivate local action.) This non-profit organizations represents collaboration among large non-profits, the National League of Cities, and foundations.

Large cities will want to read the research and think about the methodology behind the Green City Index. The index project seems to have fallen dormant, but some useful studies of cities in Asia, Europe, and Latin America were completed based on the still-valid methdology..

Each of these organizations, certifications, and indexing projects can provide valuable insights, examples, and information.

Besides planting appropriate trees as outlined in our tree canopy page, municipalities can lead as green communities through cleaning up their own house. This often includes:

Pausing here for a moment, we see that these first four legislative measures for green communities fall within the traditional boundaries for municipal land use regulation. The connections among these measures are explained in a recommended book, Green Metropolis: Why Living Smaller, Living Closer, and Driving Less Are the Keys to Sustainability. As this book points out, many popular and trendy sustainability measures are fairly pointless unless you address root causes and impacts of a scattered development pattern and therefore more driving of personal automobiles.

Other community legislative initiatives could include:

Role of the Sustainability Committee in Green Communities

Often municipal governments are slow to implement these green communities measures simply because staff members don't have time to research the solutions.

Let's face it. In some areas, such as renewable energy, the technology is changing quickly and many unproven techniques are out there. So a busy municipal official may put that brochure about natural gas powered vehicles on the stack to be read someday if there's ever time.

As a first positive step, many municipalities are appointing a green citizens' commission or sustainability committee. As we said earlier in this article, the commission might lead the way in stimulating action by the city government itself, residents, school boards, and businesses.

The municipal sustainability committee, whatever it may be called, can help to research some of these things. They can talk with salespeople, contact other municipalities, and even go on field trips to see what others have done. They can set up peer-to-peer conversations so their government officials don't have to feel as though they are taking the recommendations of citizens without any professional input.

Internet research is key to making the job of the sustainability committee bearable. Making lists of what other similar cities or towns have accomplished can be very helpful.

If your city or town decides it wants to be a green community, the investment in an ICLEI or other membership can be worthwhile. It provides a tool for measuring the community's carbon footprint, and with college intern power it can be implemented over a summer. Then of course a few summers later, you can see your progress and get everyone excited again about participating in the green communities movement.

LEED-Neighborhood Development: A Tool to Evaluate How Green an Area Is

Note that LEED, a program of the U.S. Green Building Council and an acronym for Leadership in Energy and Environmental Design, now has developed a certification for neighborhoods or whole developments, rather than the single buildings for which LEED certification of meeting "green" requirements is most noted.

A very helpful source of information for you as a community leader or activist can be found in the downloadable publication A Citizens Guide to LEED for Neighborhood Development.

This publication will stir up ideas for you even if you know in advance that pursuing the LEED-ND certification is too expensive or cumbersome for the project or existing neighborhood you have in mind.

For communities in the U.S., area-wide projects to help residents and organizations become greener is a pleasant challenge, because on this topic municipalities often have been ahead of state governments and definitely ahead of the federal government in grasping a concept and running with it.

In all parts of the world, many activities of community organizations and non-profits could help your city become known as a leader among green communities. Doing so will position your community to retain your talented young people who care deeply about our planet, to respond quickly to grant opportunities, and to be recognized as a thought leader in your region.