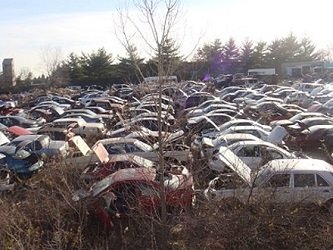 Environmental justice is a term that means that both great environmental amenities (parks, scenic views, clean water, and clean air) and potential environmental hazards are evenly distributed throughout both upper-income and low-income communities.

Most often the phrase refers to clustering of undesirable environmental land uses in a particular neighborhood, usually implying undesirable land uses where low-income people  or people of color live.

Some people also may use the term in a more theoretical way, considering crime, drug dealing, poor quality development, or homelessness as part of the environment.

Environmental justice in the positive sense is pretty abstract. No one strays into a neighborhood and says, "Oh, look at their environmental justice. Isn't that good-looking?" But well-meaning people do smile a little when we see government, business, or households adding an improvement to a struggling neighborhood.

The injustices, on the other hand, really should be called to the attention of the elected officials, corporate leaders, faith community, and neighborhood groups repeatedly until actions are taken to assure that future developments do not add to environmental injustice, and that in fact over time, environmental justice is improved dramatically.

We may ask why poor communities still are usually the communities of choice when something not so desirable is located.  From the perspective of the affected communities, lack of political power in general and knowledge of environmental issues in particular often inhibit the effectiveness of their advocacy.  But both activists and elected officials and planning commissioners can do much more to address this despicable situation.

The unfair distribution of undesirable environmental features and toxic waste sites begs the question of why society allows these hazards to exist anywhere near human activity in the first place.

Because that's a broader discussion, we'll just concentrate on a few ideas about how to address existing and potential future environmental pollution.

Mostly we think environmental injustices result from unconscious racism and classism on the part of business leaders and their elected and appointed officials, who fear the reaction of more educated and powerful neighborhoods. It's a vicious cycle, with minority groups tending to have lower incomes and therefore only being able to afford neighborhoods that have some negatives.

But the point is to make the siting of new facilities equitable, and to raise the profile of existing and proposed environmental nuisances and hazards so that the racial disparities in exposure to environmental pollution become apparent. Over time, the polluters can and should be phased out or more evenly distributed across neighborhoods.

Learning About Environmental Justice in Your Community

Most of us are pretty fuzzy about whether our metropolitan area or community has an environmental justice problem. The classic example is to think about where is the landfill, still called the dump in many circles. Chances are pretty good that it's close to a minority population center rather than the center of affluence in your community.

But many pollutants aren't so visible. One place to begin is at the pollution scorecard website, where data from the U.S. Environmental Protection Agency (EPA) are digested into a searchable format. You can find the largest individual polluters, most polluted communities, and so forth on this site.

Making an inventory of the environmental justice picture in your community would be a useful neighborhood association idea, nonprofit group initiative, or class project for that matter.

Collect and map the information available on power generation sites, incinerators, known polluters, common eyesores such as unsophisticated auto salvage businesses, sanitary landfills, plants where health dangers already have been reported or suspected, places where firefighters and police practice shooting or fire abatement, and especially noisy places such as racetracks near residential areas.

You may even want to include major highways and airports, which points out that land uses and community facilities that are usually considered assets may be liabilities from an environmental perspective.

When you find an organization with a GIS (geographic information system) computerized mapping setup, you can overlay information about the location of minority populations very easily. Usually that's a local utility, government, or a business that is built on delivery services. If you can't make a deal for GIS usage, a tracing paper overlay still works.

How Neighborhoods Can Work to Enhance Environmental Justice

If you want more safe parks and clean water, get your neighborhood association well-organized and ask for trails, clean-up of abandoned facilities and excess pavement, and proper controls on emissions of any factories or utilities nearby.

The techniques to address any negative conditions are similar to any other action your neighborhood must take to preserve or enhance your quality of life.

In large cities, often you will find an environmental law center of some type to help you.

A local university also will have experts who may be able to assist in evaluating environmental hazards. Begin with a medical school or chemistry department.

In some cases if you find out what pollutants a proposed new use would produce, your own physician can give you some perspective on the health effects.

You don't have to demonstrate detailed knowledge of the subject, because your elected representatives probably won't understand any more of the science than you do.

However, making the effort to master a one-sentence summary of the health or psychological effects of an environmental injustice will be very important to you.

Finally, use whatever techniques have worked for your community in the past in fighting for civil rights and equitable treatment in other respects. You deserve a clean environment as much as the next person.

For a rallying cry that has been used by others, download the National Resource Defense Center's Principles of Environmental Justice. This statement is comprehensive, but each bullet point is brief and suitably sharp.

Specifically we want to challenge planning commissioners and planning staffs to do more about equitable distribution of polluting land uses. City and county councils need to join neighborhood leaders in pushing them in this direction.

As we reported first in our newsletter, the Tishman Environment and Design Center at The New School, in cooperation with the Natural Resources Defense Council, prepared a report on 40 U.S. efforts to improve environmental justice.  Central to their work is the idea that planning and zoning plays a vital role in addressing this problem.

We want to highlight two promising techniques from the report. First, we like the idea of requiring environmental impact reports for newly proposed businesses seen as potentially hazardous. These submissions should be reviewed by staff and experts to make sure that the information provided is both accurate and understandable for the community and for the planning commission and city council.  You might consider making this requirement seem less tedious by using another term.  For example, in Newark's 2016 cumulative impact ordinance, applicants for certain new land uses must prepare and submit an environmental checklist.

Requirements for reports to accompany land use applications don't guarantee that decision makers will have the backbone to act in a way that relieves past environmental injustices, of course. But having reliable information will help community activists and spokespersons to make informed and reasonable requests.

The second technique we want to highlight is the green zone idea. The Los Angeles area has really pioneered this approach, and those who are interested in this concept should study their initiatives and the results achieved.  In Los Angeles this took the form of a Clean Up Green Up zoning overlay district, with specific regulatory changes outlined for three neighborhoods. For instance, one green zone established a 500 foot minimum required setback of hazardous automobile-related land uses from residential development.   In another neighborhood, notification requirements were beefed up, and in yet another instance, higher air filter efficiency was required adjacent to a freeway.  The wide variety of regulatory measures underscores the premise that each green zone should be tailored to the needs of that specific area and its residents.

One other green zone ordinance provision we really like is the addition of an ombudsman to work with the businesses. After all, in most situations, the goal is improvement of environmental conditions rather than obliterating the business.

We thought the National City, California, approach of using an amortization ordinance is shakier legally in most parts of the country. In the zoning context, amortization means requiring phase-out of a nonconforming land use within a certain period of time. In fact, the 2006 National City ordinance resulted in a list of 137 prospects for business phase-out, but by 2013, only two auto body shops were actually targeted. So we don't consider this a hopeful approach right now.

For more details, you simply have to read and digest the Tishman Center report.

We urge communities to consider environmental justice as an important component of their comprehensive plan contents, or as a part of a racial equity lens that would play a central role in comprehensive planning.  Where the injustices already exist, planning for a transition away from those uses is critical, unless you intend to have abandoned factories and waste sites as a prominent feature of many neighborhoods of color.

On the level of month-to-month current planning decisions, you can tighten up your zoning requirements, reducing the amount of land allocated to heavy industry.  Think strategically about how to meet demand for dirtier industrial land uses as far away from housing and schools as possible. Many cities are over-zoned for industrial land simply because they haven't updated their zoning to reflect the current economy of the nation and current ways that industrial land uses operate.

If you have successfully address an environmental injustice in your community, please think about sharing your story here on this website. You could just use the form on the derelict property clean up page, and we will get it to an appropriate spot when we publish it.

Other Pages Helpful in thinking About Environmental Injustice Remedies