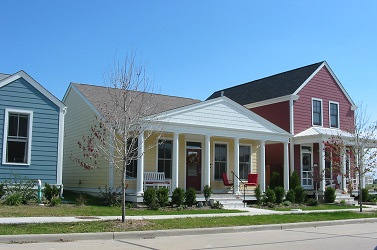 New urbanism is a design theory, practice, and movement that aims to restore what it calls principles of traditional neighborhood development (TND).

Although new urbanist thought has influenced urban design in established communities, its application lies in either building infill developments of a significant size and scale, or in building new planned communities on greenfields. Greenfields is a term for land that hasn't been developed previously.

Our point of view is very supportive of traditional neighborhood development, when executed in full. On the other hand, it's not especially good as a Chinese menu approach, where we decide we want a little of this and a little of that. Maybe we like front porches, but we keep wide streets and do not account for any transit, sidewalks, or bicycle paths.  Worse yet, developers have invoked the term new urbanism for developments in unsustainable locations due to natural hazards including flooding, and others have used the term almost as a marketing approach for an otherwise mostly typical suburban development.


Ideally new urbanist principles should be applied to large infill housing  sites well inside the edge of the urbanized area, or alternatively where proposed developments are immediately adjacent to the built-out area in a city that is growing rapidly in population.

Sometimes though developments on greenfields follow new urbanism principles but are located in regions where population is not growing much. Obviously this latter situation contributes to sprawl, which is a fairly severe criticism on this website. Throughout this article you will find that we generally are fans of new urbanism, but not in the situations where it generates or contributes to suburban sprawl.

The temptation to build sprawl thinly cloaked in the garb of new urbanism will continue to be present. Just as in typical development, somehow even new urbanist-minded developers may find it easier to start with a blank slate and not worry about any lingering utilities, contamination, and building fragments from the previous iteration of the built environment.

But let us put those concerns aside and suppose that new development is needed in a region.

As an architectural and urban planning reform movement that began to crystallize in the early 1990s in the U.S., new urbanism advocates mixed use development, walkable communities, diversity in housing and jobs, and traditional neighborhood design principles including a grid of narrow streets with prominent street termination points reserved for civic space.

Proximity to transit, potential for some open space without being adjacent to the floodplain or hazard areas, and access to jobs also were viewed as incredibly important to carrying out the lofty goals of traditional urbanist thinking.

You may have heard of Seaside, Florida, an early and full expression of this theory. It was in the movie "The Truman Show."

TND was much discussed and praised in planning circles just a few years ago. Now the enthusiasm seems to have died down, but we attribute that in part to the fact that many new urbanist principles are now widely accepted in both architecture and urban planning.

Prominent characteristics that visitors to this type of development may notice immediately commonly include:

The purist definition and principles are spelled out in a booklet called the Charter of the New Urbanism.

If you're thinking that these ideas bear similarity to the LEED-ND standards, you would be correct.  In case you are wondering, LEED, an acronym for Leadership in Energy and Environmental Design, is a program of the U.S. Green Building Council, and the LEED for ND program means LEED for Neighborhood Development. New urbanism came first, however.

Recently the new urbanist movement has begun to be more explicit about equity as a part of the social goal. While earlier developments addressed the need for varied sizes of homes, and often unobtrusively combined very small housing units with much larger ones, there is much more conversation now about racial equity and ethnic diversity as community goals that new urbanism could help to achieve.

The entire orientation toward the porch, street, civic spaces, walkable community, and shared open spaces is intended to let you know your neighbors and spend time with them. For example, mailboxes may be grouped at a gathering point or strictly regulated in their curbside appearance, just like in a traditional neighborhood. The traditional neighborhood fosters social capital, a fancy concept you can visualize as an expanded overlap of people's individual networks.

The resulting community is designed to minimize automobile travel by providing some jobs, some goods and services, and short walkable distances between community hubs. Some leaders insist that each housing unit be within a five-minute walk of the town center. In practice larger developments may have more than one center.

Recent talk of the "15-minute city," perhaps started by the Mayor of Paris, also has begun to appear in new urbanist literature. This concept is that all basic needs should be able to be met through walking no more than 15 minutes. Our comment on that is that in the U.S., even five minute walks are still a hard sell with some segments of the community, but increasing percentages of the population are willing to walk, providing the walk itself is somewhat stimulating and feels safe.

How Are New Urbanist Developments Zoned?

Freestanding new urbanist developments typically do not have a zoning ordinance at all, but are based on a design charter and covenants of just a few pages in length. Sometimes an equally brief form-based code is in effect. Often these codes are based on a transect idea, where a line or cross-section radiating out from a center determines what is considered appropriate.

However, there are many new urbanist developments that lie within an existing municipal boundary, or that are annexed at the request of the developer. In those cases the development will have to lie within a portion of the municipality already covered by a form-based code or within some type of flexible zoning district in which site plan approval is required, such as a PUD (Planned Unit Development) or just planned development district.

In some cases, a new urbanist development could require a number of zoning ordinance revisions if the city is not accustomed to dealing with anything outside of the typical suburban subdivision model. Cities wishing to take advantage of the benefits of traditional neighborhoods as described above should be proactive about providing leeway for such a development in the zoning ordinance or other land use regulation.

Later we will write about a movement to establish various types of traditional neighborhood overlay zoning districts, but most frequently these developments are proposed by enthusiastic developers.

However, I'd enthusiastically urge you to look into new urbanism if you have abandoned buildings and/or land left by the departing university, shopping mall, large apartment complex, or office campus. Former military bases and industrial sites will require clean-up, of course, but you will have to engage in some degree of environmental cleanup (see our brownfields) page anyway.

Here's how to prepare. First, do a modest amount of reading, starting with the Charter mentioned above. That plus this page will get you started. Then use your favorite search engine to locate three or four new urbanist developments within a four or five hour drive. Read about or talk to each, and figure out which one you think is the purest example of new urbanism principles.

Then plan a trip to see that development. If you want to make it just a car-load of interested folks the first time, that’s workable. But eventually you're going to have to get your city council or other decision-makers there to see, feel, walk through, and appreciate the environment.

The reason is that all of this may sound goofy on paper. And the right wing would attack it as a curtailment of freedom, a socialist scheme to have mixed incomes in the same development, and an attack on the "bigger is always better" aesthetic.

Don't be afraid of the City Council field trip. Because new urbanism began with architects, most new urbanist communities are big on aesthetics and make a great impression. And because the development type is so drastically different from suburbia, most of the residents and many visitors are totally sold on the place.

So not too much can go wrong if you actually select the most true-to-form new urbanism development in your region, and go there. Of course let them know in advance you're coming, and usually you can get the very important guided tour.

The result of following this theory is good-looking, but there will be many questions from your city officials about how it was implemented, what kinds of ordinances were required, and how certain problems are handled.

You'll want a developer, builder, or architect who has behind-the-scenes knowledge available to answer these questions.

Fortunately, here is a large but cohesive body of writing on new urbanism. Begin with the Charter of the New Urbanism  and the rest of the Congress for the New Urbanism site.  Also read about TOD and new urbanism on another site. Read the writings (or a summary) of Andres Duany and Peter Calthorpe, a couple of the founders, and you'll know plenty.

Also of Interest to Those Reading About New Urbanism